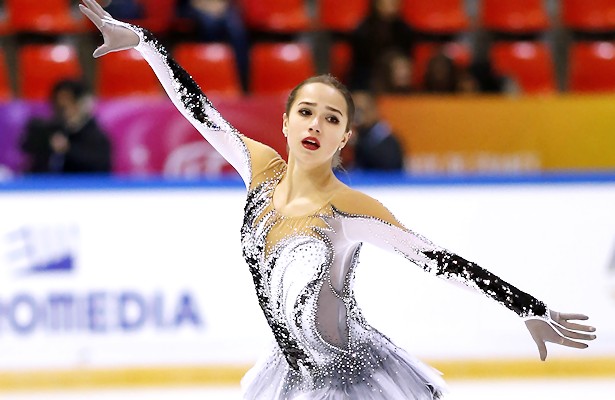 Russia’s Alina Zagitova continues to take the figure skating scene by storm. In her first senior year, the 15-year-old won her two Grand Prix events in Beijing, China, and in Grenoble, France, and qualified for the Grand Prix Final.

It’s hard to believe that the teen first appeared on the international scene in the Junior Grand Prix less than a year and half ago. The skater appears to be somewhat following in the footsteps of her famous teammate Evgenia Medvedeva, the two-time World and European Champion, with whom she trains in Moscow under Eteri Tutberidze and Sergei Dudakov.

Moving up from the junior to the senior level is a big step for most young figure skaters, however, Zagitova is making it appear easy.

“I really enjoyed competing on the senior Grand Prix,” she said. “At my first one (in China), I was a bit nervous, because I didn’t know how the audience reacts and if the judges like me.”

However, not everything went according to plan. In both Grand Prix events, as well as in the Challenger competition Lombardia Trophy in Italy, Zagitova made errors in the short program, but moved up to first place thanks to an excellent free skating program.

“We kept my free program Don Quixote from last year, so it is easier for me to skate,” the teenager noted. “The short program to Black Swan is new and maybe therefore, a little harder. The short program is probably more difficult for me, although I’ve skated it a 100 times already and I did the steps, the jumps … I don’t know what is happening,” the World Junior Champion shared.

Zagitova likes her short program and even feels that the character is closer to her than the long program. She portrays a good-natured swan that turns into a “tough assertive one.”

“In life, you can’t just be a good-natured person, you also have to be assertive,” the ISU Junior Grand Prix Final Champion explained. She feels that in competition, she needs to be tough, although she is a softer person. “You are training calmly, then you go out in competition and need to do everything you have trained. For this you need to develop toughness.”

For now, the main goal is to fix the issues with the short program, and the skater plans to do more run-throughs in practice in order to gain confidence.

“We’ll do something with the short program. We won’t change it, but we’ll make some adjustments so that it becomes more comfortable for me,” the Russian Junior Champion shared.

Zagitova is now looking forward to the 2017-18 Grand Prix Final coming up next week.

“I enjoyed the (Junior) Final,” the teenager recalled, her eyes bright with excitement. “It was a special and important competition for me. Especially, when I saw for the first time the other skaters – Shoma Uno, Javier (Fernandez), Yuzuru (Hanyu) … And then I was even on the same ice with them during the exhibition practice. I was so impressed that they stood next to me, I couldn’t believe it!”

Zagitova, the first junior lady to break the total score above 200 points (2016-17 JGP Final), is still fascinated to see the “big names” close-up.

“I am astonished that they have been skating for so many years, that they put in so much effort and continue to do so,” she said. “They inspire me.”

While both competitive programs are to ballet music, the exhibition program “Afro Blue” by Jazzmeia Horn is something entirely different – with sounds and voices which give a “deep in the jungle” feel.

“I am portraying the priestess of fire,” Zagitova explained. The program was choreographed by Daniil Gleikhengauz and Eteri Tutberidze. “It is something different and new to me,” the teenager said. She uses a burning candle as a prop. “In the old times, when human beings needed the fire, they regarded it as something holy, they tried to keep it burning and protected it from rain and wind,” the skater pointed out. In this program she shows a different side of her skating – not so classical, but very innovative. “My coaches already alluded that in the future they will give me different kinds of programs, but I don’t know yet which ones.”

The teenager, who looks up to Russian gymnast Alina Kabaeva, would enjoy skating to a Tango in the future. “I feel that music and I skated to a Tango when I was little. Tango is a character program.”

“Which athlete doesn’t think about the Olympic Games?” she said. “There is always pressure. No athlete wants to inflict shame on herself and the coaches. The coaches are working so much with us, you don’t want to let them down.”

In order to avoid distractions, Zagitova rarely reads what is written about her, and she especially doesn’t like it when the media talks about a building rivalry between her and Medvedeva, who recently withdrew from the upcoming Grand Prix Final.

“They now like to compare us, put pressure on us, because people don’t understand that we are training in one group and we have to be calm and prepare for competitions,” Zagitova noted.

At home, the World Junior Champion likes to relax by creating pictures with rhinestones “that really calms me down” and by playing with her pets – a cat and two chinchillas. “I always wanted to have those fluffy animals. They are like squirrels. I buy them all kinds of treats and they have become quite fat already. I tell them – ‘eat, eat, you don’t have to jump like me,'” Zagitova said with a laugh.