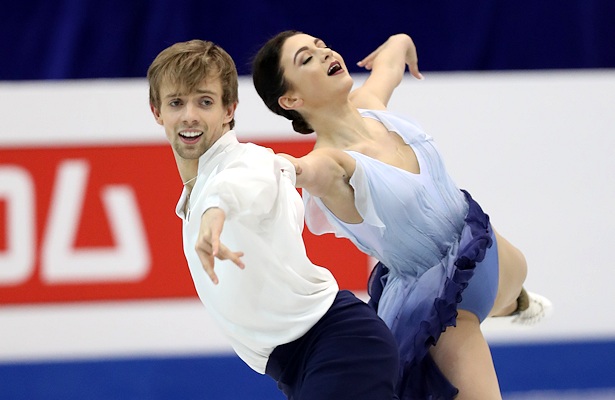 USA’s Kaitlin Hawayek and Jean-Luc Baker won the ice dance title at the 2018 Four Continents Figure Skating Championships on Thursday, improving on their fifth-place finish from three years ago in 2015. Carolane Soucisse and Shane Firus of Canada rose from third to capture the silver in their debut at this event, while Japan’s Kana Muramoto and Chris Reed took the bronze, breaking a historic record for winning the first medal in ice dance at a Four Continents event in which only the U.S. and Canada has dominated since 1999.

“Definitely we set out to put out solid performances this week and to come and show our consistency that we’ve been training and I think we did a great job on that,” said Hawayek. “Being on top of the podium is just the icing on top of the cake. It’s a great honor.”

The 2017 U.S. Classic silver medalists see this success as a trajectory forward and feels the results of this event speak for the way they’ve been training and that they are at the same level as the top teams that are going to the Olympics.

“In our case, we are in a country where the teams ahead of us are just incredibly strong,” said Hawayek. “It pushes us every day to train harder and to be better. It didn’t give us the opportunity to qualify for the Olympics in Pyeongchang. We are first alternates and we’ll be training hard just in case. Hopefully, our success will continue in the next four years and we’ll get the chance to get to Beijing (2022 Olympic Winter Games).”

“Yes, it’s our first medal at an ISU senior Championship event,” said Baker regarding their first ISU senior-level championships. “It was really awesome, it was a new experience for us. We’ve medaled at junior events and sporadically at senior events in Grand Prixs or senior Bs. It was a really cool experience and we hope to do it more often in the future.”

The Americans, who had an overnight lead after the short dance, felt like they came off their national championships with good momentum and new confidence. Going into the free dance, the 2018 U.S. pewter medalists wanted to “show the audience, judges, and people around the world that they were ready to compete and there to have fun.”

Despite a few minor bobbles, the team from Bloomfield Hills, Mich., was solid in their routine to “Liebesträume” arranged by Maxime Rodriguez. They earned a level four on all elements except for the dance spin and both step sequences. High grades of execution (GOE) and program component scores were key in their first place finish for a season’s best of 105.21 and total score of 174.29.

We had some little stumbles here and there,” Hawayek admitted, “but in terms of the quality of our elements, I think the elements that we put out were really great. We can definitely work on the performance quality, but all in all, I think I am happy.”

“I think we have all of the tools to be at the top right now,” she continued. “We just have to kind of fine-tune everything, really work on the tiny details that you see all the top teams are mastering, just finish the quality of all the elements. That’s something that we’re going to strive for going into the next four years.”

“I think we’re really happy with the way that we pushed it,” added Baker. “We were very careful, as you can probably see. We really want to make sure that we brought out our levels over here, like we did at nationals.

Soucisse and Firus, who stood in third after the short dance, came into the event wanting two clean performances with hopes to at least get close to the podium. They got more than they bargained for with their silver medal.

The team from Montreal nearly matched the technical element scores of the Americans, earning a level four on all elements except for the circular and diagonal steps. Unfortunately, however, they received a two-point deduction for an illegal element after doing a small jump in their choreographic twizzle sequence. Nevertheless, their routine to “I Won’t Dance” and “Cheek To Cheek” performed by Tony Bennett and Lady Gaga, was awarded a personal best of 99.85 for a total score of 164.96.

“We felt really great, we were confident,” said Soucisse. “I think we skated our heart out, and we are really happy about it. We train every day with specific purposes, and we practice, and we have a great team to train us, too. We are really happy that we are able to do that level of performance and a championship like this.”

Muramoto and Reed were pleased with their short dance on Wednesday, especially after achieving all the key points in their Rhumba pattern, which they felt was a big achievement for them. Their routine to music from the soundtracks of Merry Christmas, Mr. Lawrence and The Last Emperor was solid, but there was still room on the table for more.

The team who trains in Michigan under Marina Zueva, Oleg Eipstein, Massimo Scali, and Johnny Johns, earned a new personal best of 98.59 for a third place finish in the free dance and overall (163.86).

“We’re super happy,” said Muramoto of their bronze medal. “We’ve worked so hard coming into this Four Continents and it was definitely a confidence boost going into the Olympic Games. I think we deserved to be on the podium. Coming into this we didn’t think about if we medaled we would be the first Asian country to win a medal. We didn’t know that actually.”

“This really helps for the upcoming weeks of training before going to the Olympics,” said Reed. “We know what additional improvements we can work on, but we’re really happy about our results here. We skated well here for the free dance, but we know now that there is more emotion that we can add into this. It’s not fully bloomed yet.”

USA’s Lorraine McNamara and Quinn Carpenter maintained their fourth place overall (160.12) after their free dance to “Anime Contro Vendo” in their debut at this event.

“It was great,” said McNamara. “I mean I think it went exactly the way we wanted, two strong, clean skates. I think it’s a good debut for us.”

One of the main goals of the 2016 World Junior champions at this event was to show that they can be compared to the top senior teams.

“Everybody already says the transition to senior, of course, is the biggest step you can make,” said said McNamara, but you never know just how different this (is) until you are there in senior. And I think just every competition we learned more and more.”

Her partner agreed: “(It was) great experience, and (we could feel) great energy from the crowd,” said Carpenter. “Yesterday we talked about showing the difference between short dance and free (dance) on our first day, and it has been a great experience.”

Shiyue Wang and Xinyu Liu finished in fifth place (158.21) in their fifth appearance at this event, improving on their seventh place finish from last year.

“Overall, I think it’s great, especially in technical parts,” said Wang, “but we still have to strengthen our emotions in the performance. What we gained from this competition is that we can listen to coaches’ and judges’ suggestions and we can correct them next time. I think every competition is an opportunity to gain experience.”

“Our presentation score is not enough and we will pay more attention on that,” added Liu. “Luckily, we got our season’s best, and before the Olympics, we will keep taking care of the details of (the) performance and correct the problems which (we) found in this competition.”

USA’s Rachel Parsons and Michael Parsons finished sixth (155.30) in their debut at this event.

“This has been a challenging season for us and I think this competition was kind of a microcosm of it,” said Rachel Parsons. “We’ve had some rough skates, but we’ve learned a lot from it. We’re ready to build on that for next year. We’re hungry to start for next season.”

“We’re playing around with some different ideas for the free dance,” she added, regarding their plans for next season. “We definitely want to do something again that’s going to push us and that we haven’t done before. It will be fun with the short dance being Tango. We had a Tango free dance three years ago, so it will be fun to kind of dip back into that genre, see if we can put a little bit of a twist to it.”

“It’s been an amazing experience this year,” said her brother, Michael. “We’re really happy to be back here. This rink has some great memories and we’ve made some more great memories this trip. We didn’t exactly have the skates that we wanted. I think our free dance we’re really, really happy with. The short dance we’ve definitely could have done better.”