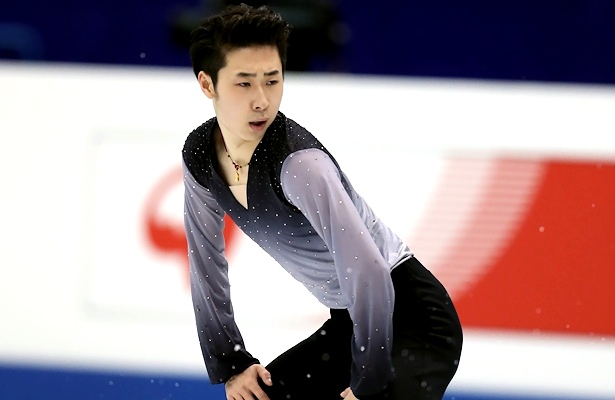 Jin, who withdrew from the Grand Prix Final and Chinese Nationals due to ankle injuries was second after the short program. To prepare for this event, he tried his best to recover and ensure that he could deliver.

“The injury was the worst I ever had,” recalled Jin. “I injured both feet and I had to get injections in both feet. I lay in bed for a few days and I never was in so much pain because of an injury. But after that, I gradually recovered and worked really hard to come back. I trained the hardest I could, and I think now I am recovered 90 percent. I was able to give an almost perfect performance today. The result of this competition gives me confidence to challenge myself to give two perfect performances in Pyeongchang.”

In addition to his quad jumps, the two-time Worlds bronze medalist also landed five triples and earned a level four on all of his spins and footwork too earn 200.78 points for a first-place finish in the free skate and overall (300.95).

The 20-year-old is now headed to his first Olympics and isn’t really focusing too much on his placement.

“For every top skater doing quads in practice is not that difficult, we all can put out good performances,” said the skater from Harbin regarding skaters reducing the number of quads in their program. “But when it comes to competition, the mindset and the mental condition really comes into play. For us, one less quad means that we can put out better performances to get the result that we want. Moving forward, I know what I am able to do, so I would like to maximize my efforts to put out my best performances.”

Uno was cautious about his short program, stating that he wanted to be stronger for the long and that his skating and steps were about half of his ability. Unfortunately, in his free skate to Turandot, the two-time Japanese champion underrotated his opening quad loop and then fell on the quad flip.

“I didn’t do my best today,” admitted the two-time Japanese champion, “but I still think the practice was not a waste. I was able to show it to everybody. I would like to be more confident and take it to the next competition.”

The 2017 World silver medalist rallied back to land to land a quad toe-double toe and a solo quad. He also earned level four for all three spins and showed two strong triple Axels. He scored 197.45 for a second-place finish in the long and overall (297.94).

“In the beginning I had the quad flip in the second half after the step sequence,” explained the skater who is coached by Machiko Yamada and Mihoko Higuchi. “Right now, I have the quad toe and triple Axel there and it maybe it is a bit easier, but it still is a pretty tough layout. As long as I can perform it, I can get to a higher level.”

The skater was donned in a new costume—a heavily-embroidered yellow shirt and black pants.

“There is no reason,” said Uno. “I always make two costumes for the season and that’s the reason why I changed it this time.”

“With one jump less in the program, I am sure that most of the skaters are going to say they’re going to take out their easiest jump,” speculated Uno in regard to the upcoming rule. “So in that case, it might be tough on your strength side. Maybe that is the only change in the sport.”

Uno claims he is focusing on himself and not concerned what other skaters might think going into the Olympics.

“Of course, at the beginning of the season I tried some new quads and I guess my performances were not really consistent,” he said. “So I changed my program and I think I am starting to get where I wanted to be. As long as I can keep that up, I can get to the next level and improve more and more.”

Brown, who stood in fourth after the short program, gave a near-flawless free skate which featured eight triple jumps. The rest of his routine to “The Scent of Love” from The Piano soundtrack was highlighted by his level four spins and footwork which received high grades of execution (GOE). The 23-year-old earned 179.44 to move up to third place overall (269.22).

“I feel great!” said Brown. “You know it’s been a tough year I feel like I’ve been chasing something all year. When I got assigned with this event, I (knew that I) just can be me. And I want to be me, the best I can be me. Kind of embrace who I am, love who I am. I went out there, and it wasn’t trying to prove anything or trying to be someone I wasn’t. It wasn’t an easy road to get here.”

On the new upcoming rule change, Brown said it’s the job of the skaters to figure out how to maximize their potential.

“When you get to a point where the skaters are able break records and push those rules, it’s that time to change it up again and you are in a system where you try to break those records and push those boundaries,” he explained. “I think it’s exciting. Until we try it and you’re in it, you kind of know whether it’s better or worse. I think it’s an exciting opportunity and we’ll see how it goes next year.”

This was the American’s first senior ISU Championship medal for the skater, and when it sank in, he got emotional.

“It was not just a senior championship medal for me right now,” said Brown. “I overcame so much this season. I continued to fight and I continued to get up every time I fell, literally. I’m so proud to be up here with these two men. They are incredible. I cannot wait to cheer them on at the Olympic Games. Just to be able to be here and pick myself up after these U.S. Championships and kind of prove to myself that I’m here, I have so much to give, I love to perform and just being able to do that is like…I can’t even put it into words.”

Japan’s Keiji Tanaka, who stood in third after the short, finished fifth in the long and fourth overall. His near-perfect routine to music by Nino Rota included a quad Salchow, a quad toe, and six triple jumps. As with his short program, he scored a new personal best (169.63) for his free skate and overall total score (260.31).

“My first half of the program was not good enough today,” said the 23-year-old from Kurashiki. “I have never felt this kind of atmosphere and the crowd was so loud and cheering for me. I felt very thankful about going to the Olympics. This (competition) was different from nationals at home and was a big event I would like to connect this to the next performance at Olympics. I would like to skate much better at Olympics and not miss the things that I missed today.”

USA’s Max Aaron landed a quad toe-triple toe and solo quad Salchow in his well-received routine to The Phantom of the Opera. The skater from Scottsdale, Ariz., earned 171.30 points and 255.45 overall for a fifth-place finish.

“I just wanted a good performance,” said the 25-year-old. “I enjoyed it. I love Taiwan and I was just happy to give a performance I guess. (The) U.S. championships was tough and I was left off the (Olympic) team, but I’m excited to be here to perform one more time in the season.”

The skater is unsure of his next plans and is taking every season “year by year.”

“After this season, I want to go back, relax, just enjoy with my family. Whether I want to continue on competing or whether I want to step forward, and retire… I really just take it day by day right now and feel how my body feels and my mind.”