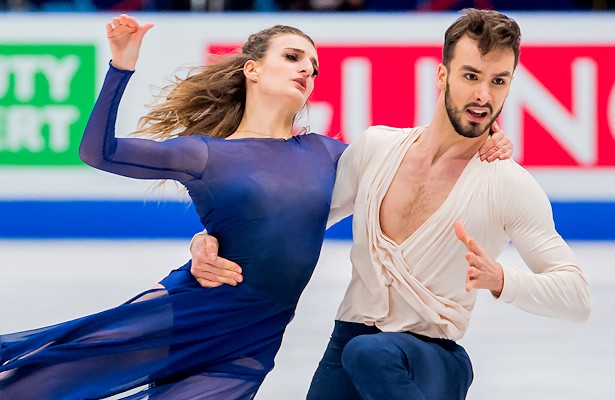 Gabriella Papadakis and Guillaume Cizeron of France won their third title with record-breaking scores at the 2018 World Figure Skating Championships on Saturday. USA’s Madison Hubbell and Zachary Donohue took the silver in their fifth appearance at this event, while Kaitlyn Weaver and Andrew Poje of Canada won their second bronze.

Fresh off Olympic ice with a silver medal, Papadakis and Cizeron topped their score from last month with a record score of 123.47 (63.94/59.53). The French team delivered a poignant and dramatic routine to “Moonlight Sonata” in which all elements earned a level 4 with many positive grades of execution (GOE). One judge gave them perfect 10s for program components in all five areas. There total score, also a record, was 207.20.

“We’re really happy about what we did today, said Cizeron. “Of course because of the scores, but before that, because of the feeling we had on the ice. We had so much fun and felt like we had so much control of what we were doing. It was one of the first times we achieved such a level of quality in our program and the connection was incredible between the two of us and with the public.

“The atmosphere around us felt like a special moment,” he added. “It is a beautiful victory, it’s cool. We are very proud of this third gold medal. I think this will be one of the moments for us to remember, we beat three world records—in the short, the free and overall.”

Hubbell and Donohue also earned all level 4s with positive GOEs in their passionate performance to the bluesy music “Across the Sky.” The 2018 U.S. champions were especially strong in their diagonal and serpentine steps and they finished second in the free dance with a new personal best of 116.22 (59.68/56.54) and placed second overall (196.64).

“Zach and I are obviously very pleased,” said Hubbell. “We’ve never been on a World Championship podium before, and to be here after this tough season is just a great way to finish. We feel we have done a lot of work tackling our demons and fear and all the ‘what ifs’ that go through our minds. We’ve had a history of making errors and giving up places, so today’s performance met our goal of keeping in the moment, keeping the connection, and believing what we did was enough. It turned out it was, so we are pleased and looking forward to the future.”

Weaver and Poje gave put out an emotional dance to “Je Suis Malade” in which all elements were graded a level 4 except for the circular steps (level 3). Unlike last month in Pyeongchang, the two-time Olympians earned a level 4 for their twizzles and scored a personal best of 114.04 (57.57/56.47) for a fourth-place finish in the free dance and third overall (192.35).

“I don’t have words for this moment,” said Weaver. “The program went by so fast and before we knew it we were climbing the podium. We’ve had a very difficult season riddled with injuries and with some of the lowest lows of our career, so it’s remarkable that we can end on this high note with our favorite program and probably the best performance we’ve had. So we have nothing but joy to share today.”

In their 12th outing at this event, Anna Cappellini and Luca Lanotte of Italy finished third in the free dance with a new personal best of 114.62 (58.25/56.37). The 2014 World champions sold their home-crowd with their story-telling routine to music from La Vita e Bella (Life is Beatiful). The team scored a level 4 on all elements except for the diagonal steps (level 3), and with a total score of 192.08, finished just off the podium by less than a quarter point.

Piper Gilles and Paul Poirier of Canada earned a personal best (111.59) with their cinematic routine to Octopussy and placed sixth overall (186.10).