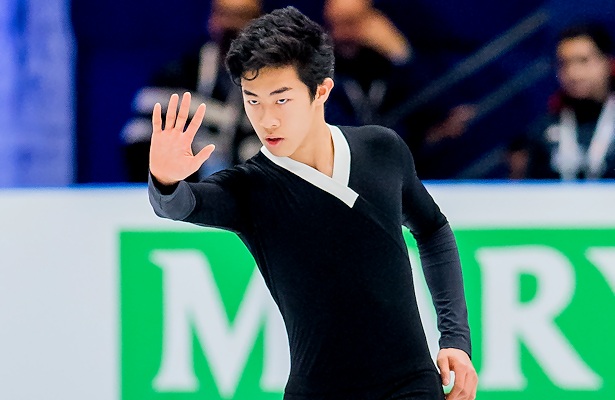 USA’s Nathan Chen maintained his lead, winning his first world title with over 47 points to spare at the 2018 World Figure Skating Championships on Saturday. Shoma Uno of Japan rose from fifth to capture the silver, while Russia’s Mikhail Kolyada earned the bronze.

Staying with his Olympic free skate content, Chen landed a whopping six quads, five of which were solid. The only mistake in his technically-packed and powerful routine to Mao’s Last Dancer and “Sacre du Printemps” was a step out on the landing of the quad Salchow. The the 2017–18 Grand Prix Final champion was also awarded many positive grades of execution (GOE) for his spins and footwork to finish first with 219.46 (127.62/91.84) and overall (321.40).

The skater was extremely happy with his performance and felt he had learned a lot from the Olympics where he didn’t do as well as he’d hoped.

The skater, who is coached by Rafael Arutyunyan, Nadia Kanaeva, and Vera Arutyunyan, was aware of how the others had performed before him, but also knew many had made a lot of mistakes which helped him solidify his approach to do six quads.

“Olympics are on a different level to Worlds,” Chen noted, “so coming in with that experience of what to set my mind on and what to think about throughout the program really did help me out a lot.”

The 2018 U.S.champion was glad that Worlds was held so close to the Olympics as it gave him the chance to end the season on a better note.

“The Olympics are very taxing and take a lot out of skaters and that may have contributed to what happened here,” he explained. “But from the closing ceremony to this event, gave all of us time to recover. However, a little more time would have been better, but I’m really glad this event was here.”

The 18-year-old from California was happy he was able to do six quads.

“The six-quad decision was sort of based on what other guys were doing,” he said, “but I prepared well for it. I did six at the Games too. They were also not perfect and they weren’t perfect here either, so I have a lot to improve on. I did five, but stepped out of the sixth. I’m glad I had the opportunity to try it. As far as I understand, there may be a rule change coming up, but I’m glad this season I have been able to keep trying and keep trying so I was able to do what I did here.”

“It’s not our decision,” Chen responded, when asked about the upcoming rule changes on the time of the program. “Whatever is thrown our way we’ll take it. Regardless, we will prepare as best as possible, but right now, I don’t know what the change will be. We all try not to do the same thing. Right now, I’m not really sure what the rules are or going to be, but we’ll take it and try and progress on as best as possible.”

The skater also did not take the point deficit between him and the other medalists for granted.

“Shoma is injured,” Chen pointed out. “We knew that all week, and through the short program and long program at Olympics he didn’t do that. I sympathize, because I’ve competed with injuries, so I know how difficult it can be. I wouldn’t look at the point deficit, I’ll take it as a win for today and keep working and I know these guys will do too. I know Shoma is very hard working and he has really challenged me over the years. When he landed the quad flip, that motivated me to try, and seeing him go for the quad loop gets me motivated to do that too. He also brings a lot artistically to the table. It’s great to have the opportunity to compete against him. He keeps me inspired and motivated and trying to improve myself.”

Chen acknowledged that there was a lot of pressure on his coach, Rafael Arutyunyan, as he had other skaters at the event.

“I am sure he was nervous for all of us, but he was super happy that I was able to do what I did here,” said Chen. “We have worked hard for the last few years, so a lot of my success goes down to him too. I’m happy and know he is too that I was able to do that. We have a bond further than a skater and a coach, he’s like a father or a mentor to me. I’m glad I can work with him and continue to work with him in the future.”

When asked if he could “take back” his short program performance from the Olympics, Chen said: “No. The Olympics is what it is and I learned so much more from making mistakes in the short program than if I had skated better or like I did here. It helped me improve as a skater and taught me how to approach big competitions, and that will help me better than if I’d done this short program there.”

Uno, who has been battling an ankle injury, took three falls in his dramatic routine to Turandot:  opening quad toe and then underrotated and fell on both a quad flip and quad toe. Still, The 20-year-old landed a clean quad toe-double toe and triple Axel-single loop-triple flip combo, earning a level 4 on two of his spins along the way. He was awarded 179.51 (94.65/88.86) for second in the free skate and moved up to second overall (273.77) for his second consecutive world silver medal.

“I was not able to show my best in either the short or the long program here,” said the 2018 Olympic silver medalist, “but I didn’t give up till the end, so I think that’s the result here.”

The skater, who is coached by coached by Machiko Yamada and Mihoko Higuchi, doesn’t see a problem with Worlds being held the same season the Olympics are.

“If they decide not to hold World Championships in an Olympic year, that’s ok, and if they do, I will prepare myself,” he said. “It’s not the skaters’ decision and if they give us the schedule, we’ll be able to adjust to it.”

On the proposed rule changes to shorten the length of the programs, Uno said: “If we are doing one less jump, I will probably take out my triple Salchow as it is my easiest jump. It only takes a little more than 10 seconds to do this jump, so it will be difficult to skate the whole program the way it is now.”

When asked what he admires in Chen, Uno responded: “My personal opinion on not just Nathan, but also Mikhail (Kolyada), is that I like them as skaters and as a person. I know I’m competing against them, but I’m also rooting for them because I respect them so much. Many things about Nathan are outstanding. He’s an all-round skater, very well-balanced, and not only that, but his jumps are very consistent and he has so many kinds of quads. As for Mikhail, in his short program, he didn’t even try a quad Lutz, so to be able to score over 100 points was very impressive. So I think each of them have such outstanding points.”

Kolyada showed swagger in his Elvis Presley routine despite two falls (quad Lutz and quad toe). The skater from Saint Petersburg was otherwise clean, landing a quad toe and four triples, as well as displaying strong level 4 spins and level 3 footwork. The two-time European bronze medalist placed fourth with 172.24 86.12 88.12 and slipped from second to third overall (272.32).

“To be honest it is a great feeling, especially the short program,” said the 23-year-old. “It’s great, because since 2011, no Russian man has gotten on the podium, so I’m happy it was me that did.”

His opinion on holding the Olympics during the same season was neutral. “It is not decided by the athletes. It happens so we compete. That’s the way it is. For me personally, I had enough time to rest and then prepare again.”

“I don’t know what to say because there are a lot changes ahead in the judging system,” said the two-time Russian champion in regards to the proposed rule changes. “I think they will make unusual decisions. There will be interesting changes for figure skating in general. Not everyone can do six quads.”

Israel’s Alexei Bychenko put a hand down on a triple Axel and stepped out of triple Axel combo in his theatrical routine to “Recitar! Vesti La Giubba.” The 30-year-old otherwise landed a solid quad toe-triple toe and solo quad toe. He finished seventh in the free skate (167.29) and fourth overall (258.28).

Kazuki Tomono of Japan turned out the landing of a quad Salchow in combination with a double toe, but was otherwise clean in his debut at worlds. The 19-year-old landed a solo quad Salchow, along with six solid triples, and earned a level 4 on all his spins in “West Side Story” routine. He took third in the free skate with a new personal best of 173.50 (94.40/79.10) and rose from 11th to fifth place overall (256.11).

Deniss Vasiljevs of Latvia rose from ninth to sixth place (254.86) after finishing fifth with his free skate with 170.61 (87.41/83.20) points. The 18-year-old, who is coached by Stéphane Lambiel, landed eight solid triple jumps and displayed strong level 4 footwork and spins.

Russia’s Dmitri Aliev underrotated a quad toe and triple Axel to finish sixth (170.15). With a total score of 252.30, the 2018 European silver medalist catapulted from 13th to seventh place overall.