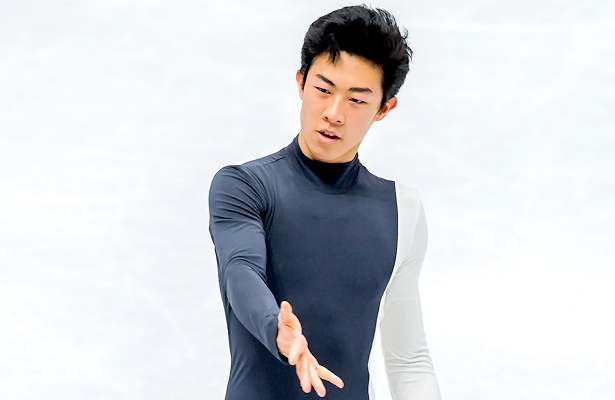 Chen had to hang onto the landing of a quad Lutz-triple toe and quad flip, resulting in a few negative grades of execution (GOE), but the 2018 Olympic bronze medalist landed a solid triple Axel and showed strong level 4 steps to earn 101.94 (57.51/44.43) points for a first-place finish.

“I’m very happy with the way these World Championships started, especially after having two such rough short programs at Olympics,” he said. “It’s been great to have the opportunity to try the short program again and I hope to redeem myself. Ultimately, I’m proud of what I did here.”

Going to the Olympics was a dream come true for the skater who trains under Rafael Arutyunyan.

For the free skate, Chen just wants his performance to be as clean as possible and is not certain on what or how many quads he will do.

“Things can change,” he said. “We still have a day in between which gives me time to really think about it. In terms of placements, in the past I have thought so much about it and it has never really helped me, so the smartest thing now is to focus on all the things I can control, go out and enjoy it and have the best skate possible.”

“I learned a lot from the Olympics and used that heading into short program in terms of what to think about,” Chen added. “I didn’t really alter (what I did) too much, just maybe a bit more focus on the short program as that’s where I faltered during the Games. I think that really helped.”

Kolyada nailed his opening quad toe-triple toe, following up with an equally strong solo triple Lutz and triple Axel in his routine to music by Mozart. All elements were graded a level 4. While the 23-year-old’s program component scores were a bit higher than Chen’s (45.22), his technical score was (54.86) and he finished second with 96.78 points.

The skater from Saint Petersburg intentionally removed the quad Lutz from the short program in order to make it easier so he could skate it clean without mistakes.

Kolyada felt the Olympics was indeed a very good experience as well.

“No matter what worked out and what didn’t, the emotions are only positive,” he said. “It is such an important competition for each athlete, you can say, the dream of your life. After being there, I drew some conclusions and I continue to work. In order to get on to the podium, you should not think about the podium, as funny as it might sound. You just do your job.”

The skater plans do the same content in the free skate.

Zhou was clean in his routine to “Chasing Cars,” landing a quad Lutz-triple toe, quad flip, and triple Axel. The 2018 U.S. bronze medalist earned a level 4 on all spins and had the highest technical score of the event, finishing in third place with 96.78 (57.78/39.00) points.

“I came here to skate a clean program,” said the skater from California. “I did just that, and being in the top three is the icing on the cake.”

“This season, the primary goal was to make the Olympic team, and at Nationals, I was kind of on the edge of my seat waiting to find out whether I made the team or not. When I finally made the team, it was one of the best moments of my life. I skated well, the free skate was especially memorable, and I am always going to remember my first Olympics as an amazing experience like no other.”

Zhou plans on keeping his free skate consistent with the Olympics. “I’ve been training some good programs so I look forward to showing you that in the free.”

“Age doesn’t really matter to me,” said the 17-year-old regarding being the youngest. “I’m still going to skate two programs as well as I can regardless of how old I am.”

Boyang Jin of China nailed his opening quad Lutz-triple toe, but under-rotated a quad toe in his routine to music from Crouching Tiger, Hidden Dragon. The 2018 Four Continents champion currently sits in fourth place with 95.85.

Japan’s Shoma Uno landed a quad toe, however, the 2018 Olympic silver medalist appeared labored in his routine to “Winter.” It was reported that the the 20-year-old sustained an injury during practice on Tuesday and this skates were causing him pain. He is in fifth with 94.26 points and had the highest program component score of the event (46.36).

Keegan Messing of Canada earned a new personal best of 93.00 for his performance to “Singin’ in the Rain,” which featured a quad toe-triple toe, and is in sixth place.

Israel’s Alexei Bychenko put out a crowd-pleasing performance to “Hava Nagila,” which was highlighted by a quad toe. The 30-year-old scored a new personal best of 90.99 for seventh place.

Misha Ge of Uzbekistan is in eighth, followed by Latvia’s Denis Vasiljevs.

The Men’s event concludes with the Free Skate on Saturday afternoon.