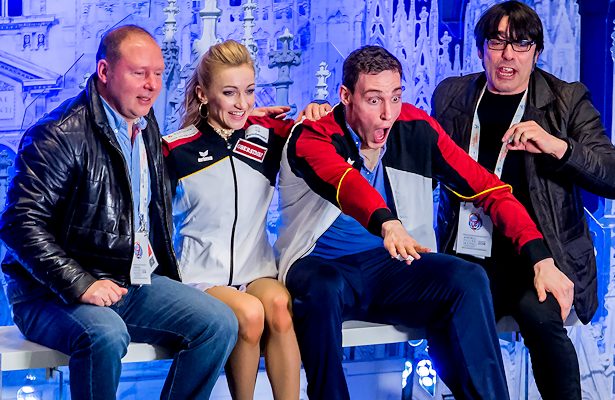 Aljona Savchenko and Bruno Massot of Germany (with coaches) react to scores at the 2018 World Figure Skating Championships.

Germany’s Aljona Savchenko and Bruno Massot maintained their overnight lead to win their first World Championship gold together as a team in Milan, Italy on Thursday. Evgenia Tarasova and Vladimir Morozov of Russia and Vanessa James and Morgan Ciprès of France won the silver and bronze, respectively.

Savchenko and Massot earned a new personal best of 162.86, besting their score from the Olympics last month. The team was awarded numerous 2+ and 3+ grades of execution (GOE) for all elements. Their routine to “La Terre Vue Du Ciel” featured a huge triple twist, throw triple flip and Salchow, side-by-side triple Salchow-double toe-double toe and triple toe jumps, and strong lifts and spins. All elements were graded a level four. The newly-crowned Olympic champions also set a record for the Total Score for Pairs with 245.84 points.

“We decided to skate here for our family, for friends and fans,” said Savchenko regarding the last competition of the season. “It was really hard after Olympics to come back home. We went home for seven hours and then we left for Art on Ice. We had just one week of preparation. But thinking of the family who couldn’t be at Olympics was our motivation to skate here. We gave all our energy and we skated with heart. That’s why it was so emotional.”

“It was exactly the season that we wanted,” agree Massot. “We started this season in September and we said (to ourselves), ‘we will give our best to win everything.’ We didn’t go to Europeans in order to prepare for the Olympics. I think it was a good choice. We realized today that we reached our goal of the season today.”

The skaters fed off the noise of the crowd, finding it motivating.

“It’s the best way to perform when the public is with you,” said Massot. “Of course they were here for Italy, but they were here also for everyone else. It was an amazing audience. When we were on the ice and heard all these people screaming and clapping, that gives you a lot of strength to do an amazing performance. It’s not disturbing at all, just very good.”

Massot recalls the day Savcheno asked him to skate with her. “Of course I remember my reaction (drops his jaw). I realized today the crazy work I had to do during these four years, but I was not alone to work. I mean we worked together for the same goal in the same way. It was hard work for her to bring me to her level, and it was hard work for me to reach her level. We all remember this and that’s why it gives me a lot of emotion. We remember all these good or bad moments. It’s a very good story for us and we are really happy.”

Tarasova and Morozov struggled on their side-by-side jumps, but showed strong throw jumps including a throw triple Salchow which earned high GOEs. The team earned a level 4 on all elements except for the back-outside death spiral (level 3), and scored  144.24 for second place for their free skate to “Candyman” and overall (225.53).

“We are happy tonight,” said Morozov. “We feel that it was hard and we’re really tired. We are happy the season is over. It was a really long and hard season. I am just happy with what we could do today.”

The skaters felt lucky to draw the last number to skate, much like they have all season.

“Now it’s normal for us to skate with (starting number) four,” said Morozov. “We didn’t have any pressure today, we just skated normally. All season, we did the same things. It was not a problem for us.”

“We had been working on the triple Salchow throw that we haven’t done for over two years now,” said James, regarding the fall. “We only started on Thursday last week, so it’s only been few days. The coaches wanted me to stay focused because I don’t have reflexes for triples any more, I just turn so quickly now for the quad. But we did a lot of beautiful triple Salchows in the warm up and in practice. I think this one was just extraordinarily big. I had too much time to come out and I got knocked out of me. But I think the experience from this and last year: A mistake can win or lose the competition, but what you do next can change everything. So knowing this from my ups and downs last year, in that moment I forgot the pain. It’s a lot of work. My coaches’, my partner’s, my sports psychologist’s support made everything possible today.”

“I want to congratulate Vlad and Evgenia and Bruno and Aliona,” said Ciprès, “because it was not only a World Championships, but it was a really, really long season with a high level in every competition. Everyone did great in this season. As for us, we are just really happy to win this medal, it’s just a dream. I think we’ll only realize tomorrow maybe that we have this medal. And I’d say it’s not medal for us, but it’s a medal for the French team, our coaches, our federation, our families, our friends, our medical staff and all the people who are close to us.”

James also recalled the first day she skated with Ciprès. “That was so long ago. I remember our 3-day-trial and it was so fun. He was so funny, because he had never done pairs before, so he was really nervous and saying ‘oh my gosh, oh my gosh’ every time he threw me. I knew that we were going to be good friends. I’m so glad I made that choice because we’re a really good team today. It’s been bumpy, but amazing with Morgan.”

Coach John Zimmerman talked to the team quite a bit about winning a post-Olympic world medal as he did in 2002.

“Every day we hear about his experience with Kyoko (Ina),” said Ciprès. “Every day. But I think it’s a good thing that he can share that with us and we can learn from what he did. He finished fifth at the Olympics and third at Worlds. I think we are the same now. I think at Europeans, we did the mistake to think too much about becoming European champions after the short. Today, we didn’t talk about the medal, we talked about what we had to do and how we can do it. I have to say, it was hard to skate well today because our preparation was really short and not that good. I think finishing third with a bad preparation is a good thing.”

Russia’s Natalia Zabiiako and Alexander Enbert showed good level 4 lifts and spins, but had problems on their side-by-side jumps and throw triple loop. They finished sixth in the free skate (133.50), but managed to maintain fourth overall (207.88).

With the exception of a fall on the side-by-side triple toe combination, Italians Nicole Della Monica and Matteo Guarise were solid in their routine to the “Tree of Life” for which they earned a new personal best of 133.53. The team displayed good side-by-side triple Salchows, a throw triple twist, and level 4 lifts to place fifth in the free skate and overall (204.33).

Kirsten Moore-Towers and Michael Marinaro of Canada finished fourth in the free skate (133.84) which featured solid side-by-side triple toes, a throw triple Salchow, and level 4 lifts. They moved up from 10th to sixth overall (204.33).