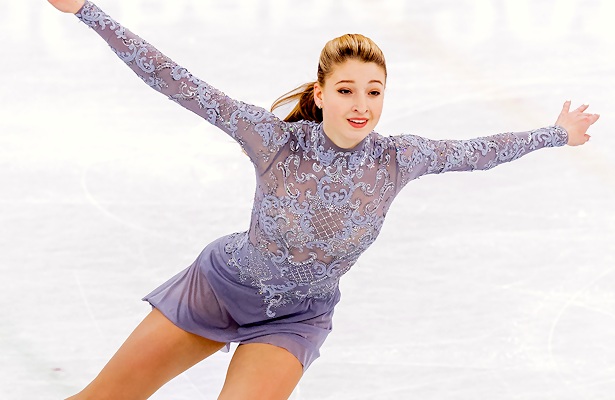 Maria Sotskova of Russia performs her Free Skate at the 2018 Winter Olympic Games.

On a sunny day in Moscow, Russian skater Maria Sotskova is working hard on the ice in the famous Army Sport Club CSKA, weaving through her footwork to Latin music. Russia currently has the most competitive Ladies’ field in figure skating, and when one makes the National Team, that speaks volumes. Sotskova did just that, earning a ticket to the Olympic Games, as well as the European and World Championships as the number three behind stars Evgenia Medvedeva and Alina Zagitova. The 2017-18 ISU Grand Prix Final silver medalist, who turned 18 last month, is now looking forward to next season and establishing herself as a top skater.

“I’ll remain in skating for many years to come, that’s for sure!” said Sotskova told Golden Skate after her training session. “I haven’t shown my best yet and there is room to grow.”

Preparation for the new season is well underway. Choreographer Peter Tchernyshev, a former ice dancer who represented the USA at the Olympic level, mounted the Latin short program to music by Carlos Santana. Sotskova herself selected that style and is happy to have convinced her coaches of her choice.

“I wanted something like that already in the past season, but since it was an Olympic season, we decided it is better not to experiment,” she said. In the past two seasons, the 18-year-old skated to classical music. “This time I tried to insist and I said that I’m dreaming of doing something Latin. Elena Germanovna (Vodorezova, coach) was not fully convinced that I can skate this program, but we decided to try it.”

“It’s very fast and it’s hard. I still have a lot of work to do. I’m feeling already now that this is a hard program,” the National silver medalist acknowledged. However, the skater is clearly enjoying it and she remembers fondly a program to “Black Magic Woman” by Santana from her junior days. “I feel that this music will push me forward,” the skater noted.

For the free skating the team chose “Summertime” by George Gershwin, which was suggested by Tchernyshev. “I really like this music and the program,” Sotskova said. “I think that I’ll show a completely different character than in the past years.” She is currently focusing on working on the programs to be able to skate them the way her choreographer sees them.

Sotskova will also be working hard on the technical aspects over the summer. In the short program, nearly all her jumping passes will be in the second half except for the Axel.

“I don’t want to have all jumps in the second half anyway,” she explained, “the program should look harmonious. Maybe I want to learn a (triple-triple) combination with a loop in order to make the program as difficult as possible. We’ll see. Every year, you want to make something harder and then you realize that you have to be clean and consistent. And for that, you need to work a lot on the physique.”

“We have a big group now and there is competition,” she offered. “I think this will help all of us when you are working and watch others you’re moving forward.” Sotskova is also friends with Tsurskaya. “I don’t think that’s a problem. On the ice it is one thing, off the ice it is a different thing,” she said.

Sotskova just graduated from school this spring and wants to start studying at the GITIS, the Russian Institute for theatre arts. Since this year there is no figure skating class as usual, she decided to try and get into the ballet choreographer class and will prepare for the entry exams. “The only thing if I get into it is that I have to attend many classes. I don’t know yet if I can combine that with my schedule as an athlete, because I won’t be given any leeway,” she shared.

However, she is interested in choreography and would love to be able to study this subject. “I’m interested in everything that has to do with creativity. I even thought maybe to try to get into the acting faculty. Figure skating and arts are very close to each other, and the GITIS is one of the leading schools of our country.”

On the other hand, Sotskova doesn’t see herself as a coach in the future. “That is really hard,” she pointed out. “You need to have a lot of strength and I don’t think that I’m ready for that now, because coaching means a lot of responsibility.”

The skater took a few days off to celebrate her 18th birthday in April and went to Vienna, Austria, where her best friends live. “They used to live nearby, they were skating too and now they went to Austria to study. When there are competitions in Europe they come and support me and I visit them when I have time,” the teenager shared.

At the end of the month, Sotskova will go on vacation in Turkey, together with her friend Polina Tsurskaya. “We have to distract ourselves a bit before the serious work starts,” she joked. After the vacation, the training group is scheduled for a high altitude training camp in Italy.

Sotskova does not know yet which competitions she will attend in addition to her two Grand Prix events since the Grand Prix selection hasn’t been made yet. However, she would like to go to Finlandia Trophy in October like last year to start off the season.