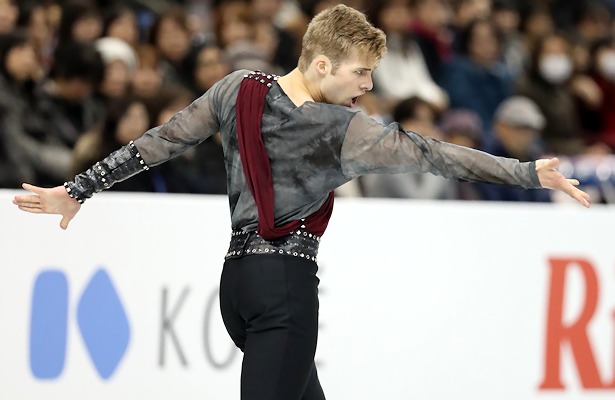 USA’s Alexei Krasnozhon won gold at all three of the 2017-18 Junior Grand Prix events, including the Final.

USA’s Alexei Krasnozhon looked poised for gold last March at the 2018 ISU World Junior Figure Skating Championships in Sofia, Bulgaria. The skater was in first following the short program when he took the ice for the long, but then injury struck: he fell on his first jump, a quad Salchow, and was unable to continue the performance. He limped off the ice and was taken to hospital where his foot was bandaged. When he returned to the U.S., he was diagnosed with a Grade 2 ankle sprain.

It was a disappointing end of the season for the Russian-born athlete, who won his two Junior Grand Prix events and the Final leading up to Junior Worlds. Krasnozhon is in the final stage of rehab right now, but he has been able to train full-time since the second half of May.

“I feel great right now, and I am training really hard and getting stronger every day,” he said. He is not discouraged by what happened to him. “That was not the best experience in my life, but people around me, such as the team doctors, the medical team from US Figure skating, my coaches, my choreographer, my friends, my family, my girlfriend and her family supported me a lot and that made the whole process so much easier. This will only make me stronger.”

Krasnozhon recently switched coaches from Darlene and Peter Cain, who were his guardians when he was a minor when he moved to the USA without his parents, to Olga Ganicheva and Alexei Letov. He is training with the new coaches at the Dr. Pepper Starcenter in Plano, Texas. “I decided to switch coaches because I feel like I want to try something new and switch up my training atmosphere,” said the 18-year-old, who also moved into his own apartment.

The 2018 ISU Junior Grand Prix Final Champion will move up to the senior level for the upcoming season and has been assigned to two Grand Prix: Finland and Russia, and is looking forward to coming back to the international scene with a bang.  His current goal is to “be to be in top five on both assignments.”

Krasnozhon has prepared two new programs for the season to show his growth and development as a skater. “My short program was choreographed by Scott Brown to the music ‘Dancing on My Own’ (by Calum Scott) and this program will show a totally different style of my skating,” the Texan revealed. “My long program was choreographed by Marina Zueva and it is a classical, powerful piece of music to ‘Piano Concerto in A minor, Op 16’ (by Edvard Grieg). Right now, I am working on my presentation and trying to look like a senior skater. I am working on my jumps as well.”

Technically, Krasnozhon is aiming for two or even three quads in his programs next year and has not been shaken by the injury he suffered last season. “Yes, I did get injured on a quad Salchow, but I still plan on doing it. This year, I will work on quad Sal, toe, and loop and the goal is to get them clean and consistent. I’m going to prove to everybody that Alex Krasnozhon can do a quad,” he pointed out.

The 2017 U.S. Junior Champion came close to landing the first clean quad loop in competition in 2016 at a Junior Grand Prix. While the technical panel recognized the jump as rotated, the skater stumbled on the landing and received negative GOEs. Shortly afterwards, Yuzuru Hanyu got credit for a clean quad loop he landed at the Autumn Classics in Canada in September 2016.

Prior to coming to the U.S., Krasnozhon was a student of renowned coach Alexei Mishin. At 13, he decided he wanted to move to the USA without his parents. First, he went only on a family vacation, but his parents wanted him to skate for two weeks before they came over themselves. The skater stayed with friends of his parents and was able to skate there and loved it so much that he wanted to remain. After staying with the friends of his parents for a few months, Krasnozhon then lived with his coaches Peter and Darlene Cain for nearly five years.

The athlete’s parents still reside in St. Petersburg, Russia. “The first year was probably tough,” Krasnozhon recalled. However, he did not regret his move. “I didn’t see my potential in Russia. I always got nervous for competitions and I didn’t know what I was doing. I was like, ‘I am good, but I don’t know what I am doing. It’s almost like I’m like a monkey being manipulated by somebody,'” he explained. “In the U.S., I finally start thinking for myself. I am like, ‘What am I not doing in practice? What do I need to do? What do I need to work on?’ In Russia, they were just telling me, ‘Do this and this and this!’ Sometimes you don’t want to do it because…why would you? In the U.S., I realized why I’m doing something.”

Krasnozhon, who prefers to be called ‘Alex’ instead of ‘Alexei’, has adapted to his life in the U.S. “I think I am American now because I am constantly surrounded by American culture, but I think I still have some aspects of Russian culture in me. I would say that I am more of an American than Russian,” he noted.

The skater is well aware that he has been criticized by fans and other people in both Russian and the U.S. who didn’t like the fact that he switched countries. “I know a lot of people don’t like me because I am skating for the U.S. and some people are saying, ‘He’s taking U.S. spots.’ I read that on Golden Skate (forum) and it’s really funny. I love reading that stuff!” the 2017 U.S. National Junior Champion shared. He also finds critical posts on Russian internet forums. “Some people say: ‘Alexei has left his country, abandoned his country.'” But Krasnozhon doesn’t let these comments distract him.

In preparation for the new season, the skater plans to do at least one summer competition. At press time, he was unsure of which one and if he would also do a Challenger event. He feels that his experience from the past season will help him. “This year I learned a very important lesson: Work hard, do what you are supposed to do, and results will come. Don’t worry what your competitors are doing. What matters is what you do, not what others do.”