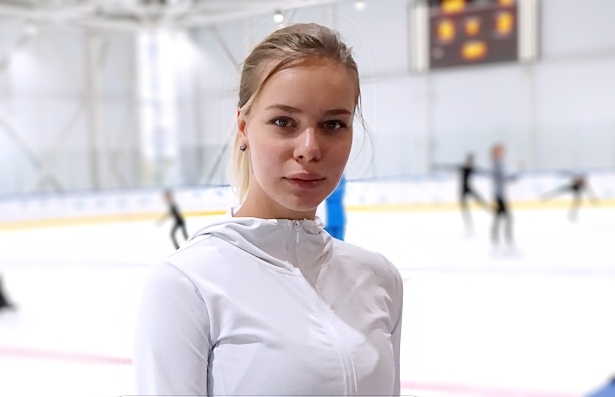 It has been a journey of pain and defeat before finding personal happiness for Russia’s Anna Pogorilaya. Last season, the 2016 World bronze medalist was in the running for the Russian Olympic team, but her season ended early when she withdrew from her second Grand Prix Skate America and then Russian Nationals due to a back injury. It looked like “game over” for the talented Muscovite.

“For half a year I was not on the ice at all,” Pogorilaya told Golden Skate on a sunny day in September in Moscow. “I was recovering for half a year (from injuries) and I am recovered now.”

After undergoing extensive rehab to strengthen her muscles, a lot has changed. Together with her long-time coach, Anna Tsareva, and some other skaters from her group, Pogorilaya moved from her old rink where Eteri Tutberidze coaches, to a brand-new facility in another part of the city. When she came back last spring, she started slow.

“I skated at my husband’s rink a bit so that my coach wouldn’t be too shocked,” the athlete recalled. “I was trying myself a bit on skates, and only after a few weeks, I went to Anna Vladimirovna (Tsareva). It was interesting to remember the jumps, to start from scratch, to overcome that fear of jumping again. I had to constantly overcome myself.”

Obviously, retirement was an option, but Pogorilaya still felt the desire and energy to continue skating. She was debating a comeback.

“I recovered,” stated the skater. “That means that I can skate and the doctors told me I have enough reserves. I didn’t put pressure on myself that I have to retire or anything. The most important thing is not to look at the others and to follow my own plan.”

“I will do what I can do,” Pogorilaya said, adding that she received a great deal of support from her husband as well as from her long-time coach and parents. “They said, ‘We support you, and it is your choice.’ Nobody could force me. I am an adult and you can’t force an adult to do what he doesn’t want to do.”

The three-time European medalist did not consider switching coaches.

“I never would have left my coach,” said the 20-year-old. “Nobody understands me and can work with me like she does. I think nobody else could tolerate me or I couldn’t tolerate another coach.” 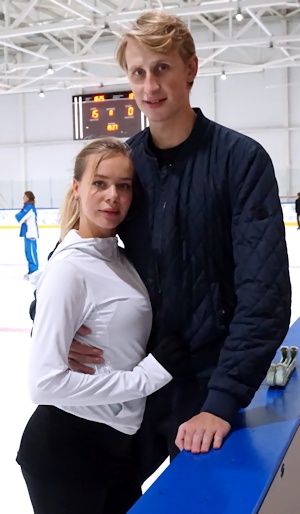 The biggest change happened in Pogorilaya’s life when she got married. That marriage came as a surprise to many. Pogorilaya had met her husband Andrei Nevskiy, a Russian-born former ice dancer, who competed for Latvia, at the World Championships 2015 in Shanghai, China, when she was 16.

“Before, I didn’t even know that he existed,” she joked.

At first, Pogorilaya wasn’t even too interested in him, but Nevskiy didn’t give up and was there for his chosen girl at any time. His persistence paid off. They became a couple, and this May, he proposed to her during a trip to Paris.

“It was very romantic,” she recalled. “We were walking around in Paris and I actually think this is where I got in shape, because we were constantly walking around. He proposed to me on the top of the Eiffel Tower.”

The couple got married on July 14 in Moscow. Pogorilaya doesn’t feel that getting married at 20 is too young.

“Others get married at 16,” she pointed out. “I think to get married at 20 is absolutely normal. Now the tendency is first to focus on your career, but I think marriage does not stop you from having a career — actually on the contrary— especially if your partner is a person who understands you. My husband is from my profession and he understands everything very well and can support me. I think only children can affect your career. It’s just that the status changes when you get married.”

Nevskiy, 25, who also studied law, retired from competitive skating last year and is now coaching and working as a choreographer. In September he helped Pogorilaya with an exhibition program for Opera on Ice in Italy.

“I am partially working with my husband, because he is a choreographer and I asked him to help me,” Pogorilaya said. “I am now, step by step, getting back into shape and will slowly start competing this season.” Pogorilaya said.

However, Pogorilaya worked with her long-time choreographer Viktor Adonev on her competitive programs. She is not ready to reveal too many details yet. She kept her Spanish-themed short program to “Esperanza” and is skating to music from Frida for the free skate. “The new program is similar to the one that I kept,” she said. This music was picked by her coach. “I liked it right away and I like both programs. The most important thing is to get started. The programs are good and nice, now I just have to do them.”

She plans on starting her season by competing in events of the national Russian Cup series this fall and then a Challenger Series event before Russian Nationals in December.

“As always, I want to go from competition to competition step by step,” Pogorilaya concluded.