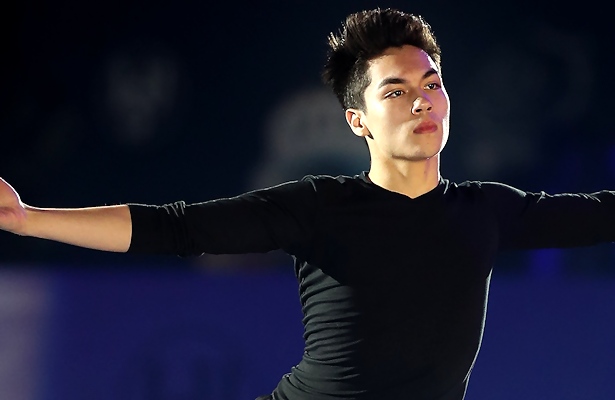 USA’s Camden Pulkinen, who had a strong season last year, qualified again for the Junior Grand Prix (JGP) Final which will be held in Vancouver, BC, in December. The skater will debut as a senior at the national level and will also be competing at his first international senior event—the 2018 Inge Solar Memorial / Alpen Trophy—in Innsbruck, Austria, next month.

“The goal is to go to Junior Worlds again,” he said. “Hopefully this time I can deliver a better short and two complete programs and be on that podium, preferably with gold!”

The 18-year-old currently trains in Colorado Springs, Colo., under Tom Zakrajsek, and also gets help from Tammy Gambill and Christy Krall. He works with Tom Dickson and Drew Meekins on choreography, Becky Calvin on basics, and Eddie Shipstead and Erick Schulz on jump and pole harness. Off ice, he works with Anna Weslin on dance and Brandon Siakel for strength training.

This season is about “re-branding” for the 2018 U.S. junior champion, who went to Latvia to work with Stéphane Lambiel on his new short program – “Oblivion” performed by Lucia Micarelli. It was the first time the skater had worked with the two-time World champion and 2006 Olympic silver medalist from Switzerland.

“I absolutely loved the experience of getting to train in his camp because he’s fantastic!” said Pulkinen. “It was definitely an experience I won’t forget and one that I’ve learned so much from. He’s very selective with who he works with and I did not want to pass up this opportunity. I looked at some of his videos to watch him skate, and after the first one, I was sold. I knew that I wanted him to choreograph my program. In his performances and programs, it came from within and it’s something I think I can learn from.”

Pulkinen had been wanting to skate to this particular piece of music for a while, but felt the time wasn’t right until now.

“I knew if I skated to it earlier in my career, I wouldn’t have had the maturity to give the  performance what it deserved and to do the music justice,” he pointed out. “So, I’ve just been waiting for a moment where I feel comfortable enough and I feel like my skating has matured enough to be challenging, but not unreachable.”

“I’m trying to play a different skater than I’ve been,” he continued. “I think this piece is one that I’m ready to step into. To finally skate to something that is seductive, yet unforgiving. It’s such a sexy program. It’s really a piece I relate to. I think this piece is going to become my favorite. I’m really excited to show it to everybody and perform it at a world stage and on the international circuit and at nationals.”

His long program is to Westside Story and was choreographed by Tom Dickson. The skater felt the piece would be challenging and force him out of his comfort zone.

“I was kind of joking with Tom Dickson one day,” said Pulkinen. “I said, ‘I should skate to Westside Story,’ and he looked at me and said, ‘Yeah, actually I think we could that.’ I said, ‘No, actually I’m joking. I don’t want to skate to Westside Story,’ and then Tom said, ‘No, really, you should watch the movie and maybe you’ll like it.’ So I watched the movie and loved it. Then I decided, why not? Let’s give it a go.”

The skater admitted it was very difficult as he is more attuned to classical styles.

“It’s really hard for me to step out of my balletic style because I need to snap more and not be like a ballerina,” he chuckled. “It’s hard for me to let that go. It’s definitely a process. It’s a challenge that I’m ready to face. I think once I get the character (Tony) down, I’ll be good at it.”

Earlier this summer, the skater debuted both his programs at the 2018 Broadmoor Open where he finished first and the skater felt he had to “let go of it” after getting feedback.

“I know my skating is a little introverted,” he admitted. “I want to look up into the crowd more and produce movements that rise into the stadium and that’s something I need to work on. I think with time and experience, it will improve.”

“I think there is a fine line on the technical ability and being a performer,” he said, when asked about quads and the new ISU rules. “I’m indifferent. I think the direction we are headed in is the right direction and I think it’s the right move what the ISU is doing. We’ll still see the skaters that are marked as jumpers and the skaters marked as artists, but I think we will see more blends of both. We’ll see more complete skaters, we’ll see a lot more well-rounded skaters. We won’t see as many skaters that lean to either side of the spectrum.”

Pulkinen admits to being a bit intimidated moving up the senior ranks at the national level with the current men landing so many quads.

“It’s definitely different going up a level and not being in the top,” he said. “I think the mentality I need to keep is that it’s learning and experience. I keep it close to me that it’s all personal gain. My goal is not to win, although that would be nice, but to have two clean skates and to have a really strong showing at my first senior nationals.”

One aspect that the skater feels he can draw upon in terms of growing and connecting with audience is ice dance.

“I absolutely love ice dance!” said Pulkinen. “When I trained with Marina Zueva last year in Canton, I really loved watching how the ice dancers trained and how they gave their soul in practice. It’s really something that anyone can learn from, especially single skaters. I feel like nowadays, a lot of people, including myself sometimes, we think of our performances as exhibitions of athletic skills.”

The skater admitted that he would like to test in ice dance for “fun,” but his heart is set on single skating and he has no intention of switching disciplines.

“Kana Muramoto (Japanese ice dancer with partner Chris Reed) and I did some dances in practice and it was really fun!” he shared. “I loved it, but it’s not what I expected. I honestly expected it to be easier, but it’s difficult! It’s so, so hard!”

In August, Pulkinen won his first Junior Grand Prix (JGP) event in Austria, and followed up with a second-place finish at JGP Czech Skate. In Ostrava, he was first after the short program, but placed fifth in the long after a subpar skate.

“At Czech Skate, I started to feel some nerves overcome me,” he admitted. “Although it is not what I wanted, it was a learning process and I feel like it was better to learn that lesson at that point rather then at the Final. I felt good taking the ice for the free skate, so it was unfamiliar for me to not skate as well as I would have liked to. Although I did not skate as clean as I would have liked, I still brought it back for the second half of the program, and gave my best effort.”

Before the JGP Final, the skater wants to improve his step sequences and achieve a level four with high Grades of Execution (GOE).

“I also want to polish my skating even more to the point of senior quality,” he said. “I also want to improve upon the spins in both programs. I think my spins could always use some improvement and can be faster. Being a more experienced junior skater now, I want to use that to my advantage and bring an even more mature side to both programs.”

Pulkinen, who is originally from Scottsdale, Ariz., moved out to Colorado Springs with his mother in June 2016. His mother was born in Thailand and his father, who is of Finnish and French descent, is currently still in Scottsdale looking after his grandmother on his mother’s side. His sister, Elena, is in California pursuing a degree in neuroscience at UCLA.

“My father comes out a lot to visit, so that’s good,” said the teen, who enjoys yoga and spending time with his mother doing outdoor activities like hiking. “I don’t like to be inside much and don’t watch a lot of TV. I do love food and eating, though!

The athlete started his first year at UCCS (University of Colorado Colorado Springs) in August and is studying Business Finance. “I might switch to Business Accounting, but I definitely want to work with numbers and perhaps be a Financial Advisor or Stock Manager agent. The possibilities are endless.”