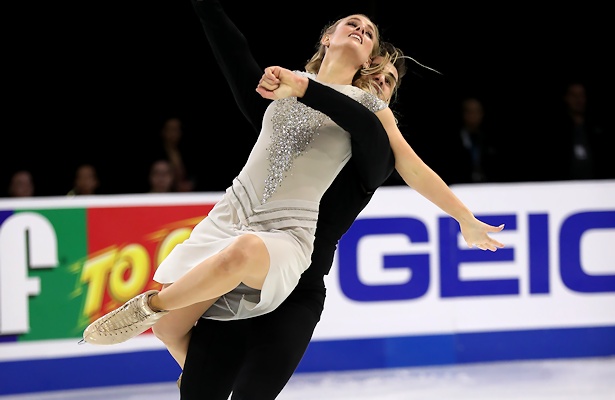 Hubbell and Donohue gave a passionate performance to modern music from the Romeo and Juliet soundtrack, showing soft knees and expression throughout. It’s obvious that major changes have been made to the routine since they performed it at 2018 U.S. International Classic where they won gold. The U.S. champions earned no less than +3 positive Grades of Execution (GOE) on all elements, and in fact, earned mostly +4 for their twizzles. The team also earned 122.39 for the Free Skate and broke the 200-mark with 200.82 overall.

“Zach and I put in a lot of work since our first competition in Salt Lake to really dive into the emotions of Romeo and Juliet and to put more skating quality, more power into the program,” said Hubbell. “I think we were able to show those changes well, but we’re also looking forward to more and more improvement, and hopefully, have a cleaner skate next week in Skate Canada.”

Guignard and Fabbri gave a technically solid and expressive performance in their delightful routine to music from the La La Land soundtrack. The two-time Olympians also showed strong level 4 twizzles as well as difficult level 4 lifts. They scored 117.29 for the Free Dance and maintained second place overall with 192.30 points.

“We felt a lot better than last night,” said Fabbri. “Even though the legs were more tired, but we probably were a bit more focused. It (the first Grand Prix medal) is a great reward for us. We started from zero when Charlene and I started skating together. I had just started ice dance and she didn’t have international experience. We are proud of what we have achieved.”

Zagorski and Guerreiro showed attitude in their complete new style to the music of “Blues” for Klook by Eddie Louis, but received deductions for extended lifts. Although the 2018 Russian national bronze medalists haven’t had much training time, they placed a respectable fourth in the free skate with 108.08, maintaining third overall (181.38).

“We didn’t know what was going to happen in the free dance today,” said Guerreiro. “We haven’t had this many free dance run-throughs under our belts, so we just kind of prayed and hoped for the best. Overall, it’s a good start.”

USA’s Lorraine McNamara and Quinn Carpenter were seamless and cohesive in their routine to music by Yann Tiersen and from the Piano soundtrack. The two-time U.S. national junior champions showed strong level 4 twizzles as well two level 4 lifts and dance spin. They placed third in the Free Dance (108.13) and fourth overall (180.57), just missing the podium by less than a point.