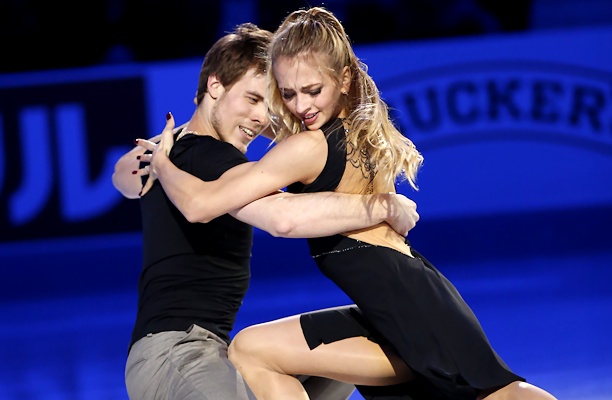 Last year, Russia’s Victoria Sinitsina and Nikita Katsalapov were considered top contenders for the Olympic team, however, their season ended abruptly at Russian Nationals in December when Katsalapov suffered an injury to his ankle during the free dance. Now the team is back, determined to fight for top placements, not only in Russia, but also internationally. In fact, the team took gold at their first international event of the season last month at Ondrej Nepela Trophy.

Ondrej Nepela Trophy was their third even in as many weeks as they had participated in the Russian test skates as well as a National Cup of Russia competition.

“We are very happy that we skated quite well,” Katsalapov said of their performances at Ondrej Nepela Trophy. “Not everything was very good, not everything was smooth and clean, but this is the beginning of the season. We had three events back to back, so these three weeks were very busy. Nevertheless, we’re not tired, we’re ready to train, analyze and move forward.”

Following the ups and downs they went through last season, the Russians are glad that they skated consistently at the test skates, the Russian Cup event, and at Ondrej Nepela Trophy without any falls or stumbles.

“It is great that we didn’t have any major issues, skating these three events back to back. Therefore, we are feeling very strong now. Apparently, people like both our programs and we want to bring across what we have on our minds. Therefore, we’ll work not only on the technique, but also on the presentation of the program, on each finger (move) on each glance,” Katsalapov pointed out. “We really want to get more and more consistent,” Sinitsina added.

The 2017 Skate America bronze medalists don’t want to dwell too much on the past season, especially their withdrawal at Nationals.

“It was very upsetting to be honest, but since there was enough time, we overcame it quite quickly,” Katsalapov said. “We just started to work and put aside all thoughts that could have distracted us. We didn’t think about giving up.”

Their next event will be Skate Canada in Laval, Quebec, at the end of this month and the skaters intend to use this time to make adjustments.

“Our technique is lagging behind,” Katsalapov admitted. “Although we were very focused on the pattern dance, that was our first job after the first competition, to improve the Tango Romantica. Unfortunately, the judges reviewed it strictly and gave us a rather low score.” The Tango Romantica pattern merited only a level one and two, but the dancers feel they know what they have to do in order to get a higher level. “We also need to work on the lifts, on the technique,” the 27-year-old continued.

The ice dancers, who are coached by Alexander Zhulin and Petr Durnev in Moscow, are convinced they have the material they need to draw attention this season. They are skating to “Verano Porteno” by Astor Piazzolla in the Tango Rhythm Dance and to “Air” by Johann Sebastian Bach and to “Praeludium and Allegro (In the Style of Pugnani)” by Fritz Kreisler.

“We really like our programs this year,” Sinitsina said. “The free dance is unusual for us. This music is so nice, and when you switch it on in practice, you are at peace. It’s calm, delicate, airy and romantic.” She admitted that at first, she was skeptical about this choice when Zhulin suggested the music. “Only when we worked on the program, when we started skating it, especially skating big parts and the whole program, then this feeling (for the music) came,” the 23-year-old shared.

Katsalapov agreed: “We are very much in love with our programs this season. The music is of that kind that you have to immerge in it. The name is “Air,” for us, it is like the flight of two souls. We want that the spectators are captivated when watching it. You don’t even need to understand some story when watching this program, but you just watch and you get drawn into it. The basic idea is probably this interweaving.”

As for the Short Dance, the former Russian Champions are no strangers to the Tango. This season, the team worked with ballroom dancers and World Champions Sagdiana Hamzina and Dmitri Vasin on their Rhythm Dance.

“I just love Tango, to show the passion between man and woman,” Katsalapov shared, adding that they plan to continue to work with the ballroom dancers. “We’ve worked a lot with them and they showed us many details. They are ballroom dancers and we are on the ice, obviously, but we tried to transfer it and we have some nice stuff in the programs that I think nobody has. We’re working on each detail, each hand movement, each step.”

“Dima (Vasin) and Sagdiana (Hamzina) recently came to the rink and watched us trying to transfer a transition move that we had done with them on the floor, on to the ice,” he added. “I think they were proud of us. We try to do that for the whole program, because it is incredibly difficult what they are doing on the floor. For instance, this so called “gancho” (the “hook,” a Tango move) and we have to do it on blades.”

The dancers spend a lot of time together, but they feel they manage it well to keep their relationship intact.

“Very often we are spending our days off separately, because indeed, we’re working together all week, from morning to night, and so we give each other a break to see our friends or parents,” Katsalapov noted. “Actually, during our vacation, I sometimes was at one place at the pool and Nikita was sleeping at the beach. We never force each other to do something together,” Sinitsina added.

The ice dancers are excited about the post-Olympic season being the beginning of a new Olympic cycle with changes and new opportunities.

“Of course, when there is an opportunity, everyone will fight and that concerns us as well,” admitted Katsalapov. “But it’s not about taking some placements. I love figure skating and I skate because I want to skate, I love it. Of course, when there is a chance, we’ll take it. We respect all competitors and we think that it will be interesting, because there is always someone coming up and we’re coming up, too.”

“There are always enough competitors and all of them keep the level up and are pushing the limits each year, with each competition. We also want to go upwards,” Sinitsina concluded.

After Skate Canada, the team will have a month to continue training before their second Grand Prix event at Internationaux de France in Grenoble.