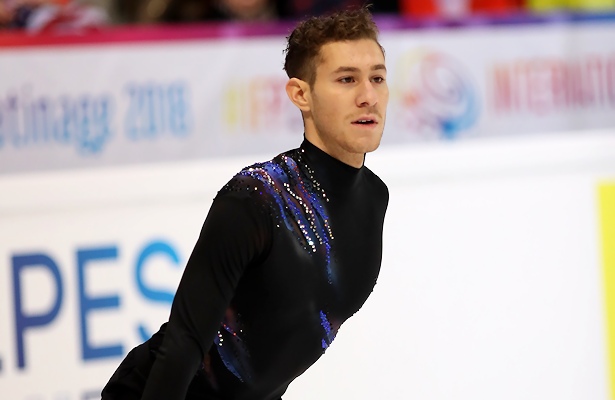 USA’s Jason Brown took the lead in the Men’s Short Program in Grenoble, France, at the 2018 Internationaux de France. Alexander Samarin of Russia is currently in second followed by USA’s Nathan Chen.

Brown delivered a flawless routine to “Love Is a Bitch” by Two Feet which featured very strong level spins and footwork, all graded a level 4 with high grades of execution (GOE). The 2018 Four Continents bronze medalist also landed a solid triple flip, triple Axel, and triple Lutz-triple toe, scoring a season’s best of 96.41.

“Today I just tried my best to be as calm, confident and focused as I possibly could be and I did that throughout the whole program,” said the 23-year-old.

Samarin also earned a season’s best (90.86) for his solid routine to “Cold Blood” by Dave Not Dave which also featured level 4 spins and footwork. The Russian silver medalist landed a quad Lutz, quad toe-double toe, and triple Axel, however, his Program Component Scores (PCS) and GOEs were lower than that of the leader, resulting in a second-place finish despite the quad jumps.

“I am satisfied with the short program today,” said the 20-year-old, “but there were some mistakes and there is room for improvement. It’s still the beginning of the season and we are improving from one competition to the next.”

Chen fell on a quad flip in his performance to “Caravan,” but otherwise produced a quad toe-triple toe and triple Axel. His footwork was graded a level 2 and two spins received a level three, and the 19-year-old was awarded 86.94 points for third place.

“The short program didn’t go exactly as well as I wanted it to go, said the two-time U.S. champion, “however, I’m glad with what I did technically today.”

Romain Ponsart of France gave a solid routine to “In This Shirt” by The Irrepressibles which featured a quad toe, triple Axel, and triple Lutz-triple toe. The Coupe de Printemps bronze medalist earned a new personal best of 84.97 points.

Deniss Vasiljevs of Latvia underrotated a triple Axel, but was otherwise solid in his routine to “Papa Was a Rollin’ Stone,” which featured strong level 4 spins and footwork throughout. He is currently fifth with a new season’s best of 82.30 points.