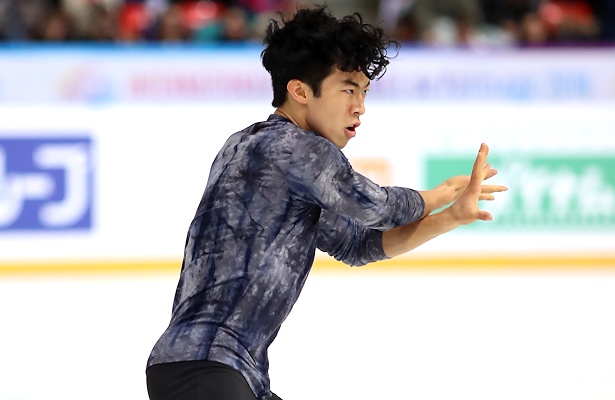 USA’s Nathan Chen rebounded from third place to take the gold in the Men’s event at 2018 Internationaux de France with more than 15 points to spare on Saturday afternoon. Teammate Jason Brown took the silver while Alexander Samarin of Russia won the bronze.

Chen received an edge call on his opening quad flip and triple flip in combination with a triple toe, but otherwise nailed a quad toe and showed strong level 4 spins throughout his routine to “Land of All” by Woodkid. The Skate America gold medalist earned 184.64 for first-place finish in the free skate and overall (271.58) to seal his slot at the upcoming Grand Prix Final (GPF) next month.

“I’m pretty happy with my performance of the long program, definitely more satisfied with the long than with the short,” said the 19-year-old Yale student said. “I’m looking forward to continuing to develop the program and develop the technical side of the program.”

Dmitri Aliev of Russia, who stood in ninth after the short, finished second in the free skate (162.67) and rose to fourth overall (237.82). The Lombardia Trophy silver medalist landed a quad toe-triple toe as well as seven triple jumps and showed strong level 3 steps.

Brown finished third in the free skate with a new season’s best of 159.92 points. His routine to a Simon & Garfunkel medley featured strong spins and footwork, however, the Four Continents bronze medalist doubled a triple Axel and triple Lutz, and under-rotated another triple Axel in combination with a double toe-double loop.

“I’m pretty pleased with the way things went,” said the 23-year-old. “Whereas the short program places my strengths, the long program really tests those strengths. I have a long way to go, but I’m really happy with the development as it has come along since the start of the season. I’m glad that I was able to stay focused and walk away with my first international medal of this season.”

Samarin under-rotated a quad Lutz and triple Axel in his routine to music from The Greatest Showman soundtrack. Nevertheless, the 20-year-old landed a quad toe-double toe and a triple Axel double toe and was awarded 156.23 points for a fourth-place finish in the free skate and third overall (247.09).

“I am not completely satisfied with my performance in the free skating as there were mistakes, notably on the combination jumps,” said the two-time Russian silver medalist. ” I am not so pleased with the result either, as the Grand Prix Final was so close and so far away at the same time. But I’m overall glad with how it ended and that I’m not going home empty-handed.”