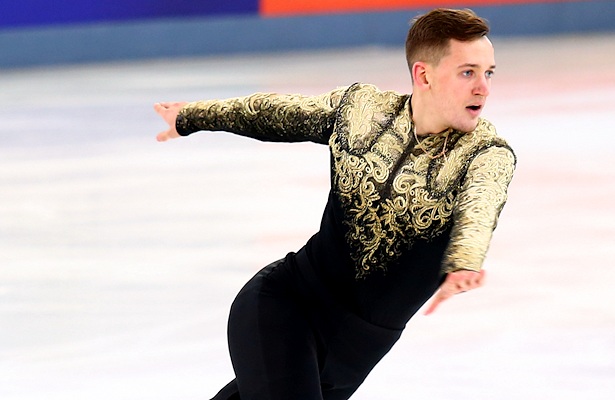 Maxim Kovtun, who had a rough season last year due to back and knee injuries, maintained his overnight lead to win his fourth national title at Russian Nationals in Saransk on Friday. Defending champion Mikhail Kolyada overcame illness to take the silver medal, while Alexander Samarin rose from fourth to capture the bronze.

Kovtun had a rough Olympic season, withdrew from Nationals after a poor short program, and was ready to call it quits. However, he had a change of heart and decided to come back and prove that he is still a force to be reckoned with.

Skating to Carmen, the 2016 European silver medalist hit a quad toe-double toe, a quad Salchow as well as a triple Axel, triple Axel-triple toe and three more triples. The only major mistake came when he crashed on the solo quad toe. He scored 186.45 points and totaled 281.59 points.

“I am glad I was able to meet my goal, to show that I’m still existing and that I’m back in the team,” said the 23-year-old, “but there were also minuses. I made mistakes in both programs, but it was a step forward and I will continue to work in that spirit.”

Kolyada also skates to music from Carmen, and so 30 years after the “battle of the Carmens” between Germany’s Katarina Witt and USA’s Debi Thomas, there is now a Russian “battle of the Carmens,” or rather, the battle between Don José and Escamillo. The skaters just need to determine who takes which role.

The battle was not quite even this time, since Kolyada suffered from sinusitis and was in hospital for a few days before being released on Monday. The World bronze medalist put out a courageous performance, landing a triple Axel-double toe, quad toe, another triple Axel and two more clean triples, but he stepped out of a solo triple toe and missed a triple Lutz. Kolyada scored 173.70 points and ranked third in the freee skating, but overall, held on to second place with 268.40 points.

“I simplified my program, but still not everything worked,” the 23-year-old commented. “Now I want to get healthy and prepare well for Europeans. The positive thing is that I qualified for the major events.”

Samarin opened his program to music from the The Greatest Showman with a big quad Lutz-triple toe combination that earned him 19.97 points. He fell on the quad toe, but then recovered to land six clean triples. The Muscovite collected 182.25 points for a total score of 265.49 points to pull up from fourth to third place.

“A lot of things didn’t work, but I am glad I was able to pull myself together after the short program. I proved that I am able to fight,” the 20-year-old said.

Kovtun and Kolyada will be selected for the team for Europeans while the third spot could be given to someone else, but it seems unlikely. Sergei Voronov, the only Russian man who qualified for the ISU Grand Prix of Figure Skating Final, could have been a candidate for that third spot, but he suffered a knee injury and apparently cannot recover in time for Europeans.

Andrei Lazukin, who debuted a new free skate to “Romeo and Juliet” by Tchaikovsky, placed fourth on 237.66 points. He landed two quad toes, but struggled with the triple Axel.

Dmitri Aliev pulled up from eight to fifth. He produced a quad toe-triple toe, but fell on a triple Axel (235.48 points).