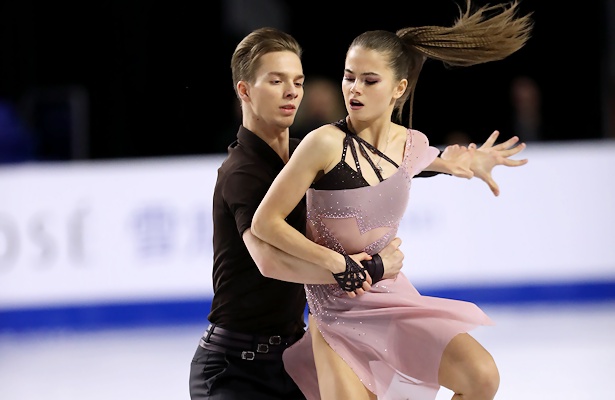 Russian ice dancers Sofia Shevchenko and Igor Eremenko clinched gold at the 2018-19 ISU Junior Grand Prix of Figure Skating Final earlier this month by the slimmest of margins (0.01 points), but the victory gives them confidence for the rest of the season.

“This was a great experience,” said Eremenko. “This (Final) was a very meaningful competition and this is a meaningful victory for us. It really boosts our confidence and motivates us even more to strive towards perfection.”

Shevchenko agreed, adding, “At first we were in state of shock. We have to realize and believe that we are a strong team, that we can fight and that we are worthy of top placements.”

The ice dancers, who came in fourth at the Junior Final a year ago and fifth at 2018 Junior Worlds, feel that they have made a big step forward this season.

“During the off-season, we’ve done a lot of work,” said Shevchenko, who just turned 17 last week. “We worked a lot on the skating skills, changed some things, looked for some details to glide better so that our skating becomes more fluid. I think that we’ve grown up. There is progress and I see that. So far, the season has been going well, but there is still a lot of work left to do, because there are still some issues that should be solved.”

The skaters were focused on doing more run-throughs of the programs so that they could “blaze through them.”

“We still have to work on the pattern dance (Argentine Tango), so it is polished throughout the season to get the highest levels at the last competitions,” Shevchenko added.

“We will work on the clean execution of the key points in the Argentine Tango and on the interaction between the partners in the programs,” coach Irina Zhuk confirmed.

Shevchenko likes the Argentine Tango and feels that it is a beautiful dance that they both understand well. For the free dance, the team and their coaches, Zhuk and Alexander Svinin, have chosen a selection of rarely heard music with “Intro” by Onuka, “Witchdoctor” by Camo & Krooked and “Lijo” by Alina Orlova.

“We’ve chosen this music all together as a team,” Eremenko said. “I found the last part, our choreographer, Alena Igorevna Samarskaia, found the second part in the middle, and our technical specialist, Ivan Volobuev, found the first part. Svinin then put it all together and Zhuk mounted the program.”

“There is a theme to it, too,” the 21-year-old further explained regarding the free. “We see a human being as a vessel. There is something good in him and something bad. A human being starts to learn feelings from birth, he feels emotions, he makes choices, he can be good or bad and with his experience, eventually in the best case, he turns towards the good side – like in our program. So the first part (of the program) is about how people just learn to feel something good or bad, the second part is aggression, when people go through war or adversities, through an inner fight, but in the end, there is peace.”

Shevchenko added: “In the beginning, we are just opening our eyes and to see the world. We think how wonderful everything is, but then we realize that there are difficult situations in life and how people behave in these situations. Eventually, in the third part, we get to the point that everything good and bright is the best and this is how you should live.”

Eremenko, who took up ice dance in his hometown Rostov-on-Don when he was seven or eight years old, moved to Moscow a few years ago with his previous partner Eva Khachaturian. Shevchenko, on the other hand, was born in Moscow and skated singles for several years in different clubs. However, a coach predicted a better future for her in ice dance and so she switched when she was about twelve.

Eremenko had joined the school of Zhuk and Svinin, where Shevchenko just started dance, but he split up with Khachaturian soon after. The coaches started to look for a new partner for him. To give him a chance to practice, he skated with Shevchenko, but the plan wasn’t to team them up.

“Igor was already a grown-up ice dancer and I was still very much a single skater who only recently had switched to the group of Irina Vladimirovna (Zhuk) and Alexander Vasilievich (Svinin),” Shevchenko recalled. “They paired us just so that I could learn how to skate with a partner and so that Igor doesn’t forget how to do that. But nobody ever thought that it would work out so well.”

“I always wanted to have a really good partner and when they told me that I’m skating with Igor only to learn, I thought by myself, ‘no, I want such a partner. He is my partner and I will do everything to skate with him,'” she continued.

Shevchenko worked hard in order to catch up. Meanwhile, Eremenko had tryouts with other girls, which motivated Shevchenko to improve even more. In the end, they teamed up in 2014, although at first there was a gap in abilities as well as a four-and-a-half age year age difference.

The couple has an athletic, modern and easygoing character and they like the modern tendencies in ice dance,” coach Irina Zhuk reflected. “This season, they have improved their speed and have become more expressive. Their strong point is their confident and powerful way of skating, while their weakness still is the communication between them in the programs.”

The goal for the young ice dancers this season is to medal at Junior Worlds in Zagreb next March. The long-term goal is to master the transition to the senior level with confidence, as Zhuk noted. As Eremenko will turn 22 next August, the team will age out of juniors next season. The coach describes Shevchenko as “enduring and goal-oriented” while she sees Eremenko as “creative, goal-oriented and chivalrous.”

Off the ice, the skaters pursue different interests as they want to develop themselves outside their sport as well. They both enjoy photography.

“We are both creative people, we can always look for something interesting, do a photo session, go somewhere,” Eremenko explained. “Before a competition, we are always planning where to go. In Vancouver we thought right away, ‘there is this great (suspension) bridge.'”

“Shevchenko chimed in: “We both love traveling, see things. We’re not only confined to the rink.”

Their next important competition will be Russian Junior Nationals in early February in Perm where the team for Junior Worlds will be determined. Until then, Shevchenko and Eremenko are tentatively hoping to plan what they want to see in Zagreb, Croatia, next March.