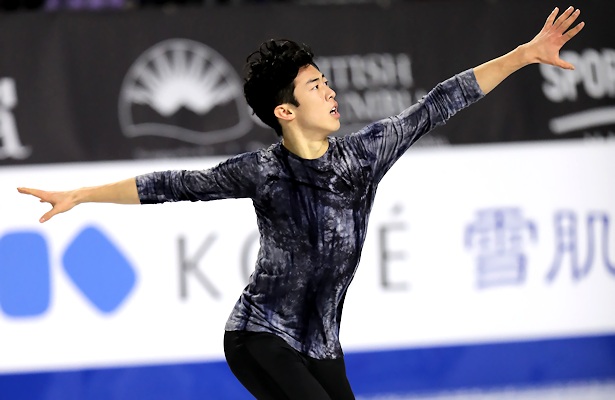 USA’s Nathan Chen defended his Grand Prix Final title in Vancouver with a determined, though gritty long program set to “Land of All” by Woodkid that included modern choreography, four quadruple jump attempts and earned him a score of 189.43. However, the American only successfully landed the quadruple flip and toe loop, the latter in combination with a triple toe loop. The 2018 World Champion rebounded towards the end of the routine to pull off a triple Lutz-triple toe loop combination and triple flip-triple Salchow sequence. Chen’s total event score was 282.42.

“I am definitely not happy with the Lutz,” said the 2018 World champion. “I definitely need to bump this up to next level. This is not quite where I wanted it to be. But again, this is the first long of the season that I have done with more than three quads. Although, I didn’t hit the Lutz in technical regards, it is a more difficult program than I am used to. I mostly wanted to improve on what I already had in the last competition in improving whether it be adding a new jump or cleaning things up. For the next competition, I will be working on completing the Lutz.”

Shoma Uno of Japan also struggled through his tender routine to Beethoven’s “Moonlight Sonata” and had to settle for the silver medal with a free skating score of 183.43 and total score of 275.10. Under-rotations marred his attempted quadruple Salchow and flip jumps, but he managed two quadruple toes and two triple Axels, one in sequence with a triple flip.

“I can definitely say it was not a good performance,” said the 2018 Olympic silver medalist, “and I think every time I finish a competition, I say the same thing. I performed today with the mindset that I would finally be able to make it, but it did not go well. The only good thing was even if I made mistake on my Salchow, I was able to do the flip and toe. The last combination jump I wanted to land cleanly.”

In his Grand Prix Final debut, Junhwan Cha made history for his country becoming the first Final men’s medalist from Korea by winning the bronze medal. Despite a fall on his opening quadruple toe, the Skate Canada silver medalist rallied to land a quadruple Salchow and seven more triple jumps, including two triple Axels and a triple Lutz-triple loop combination, during his dramatic free skate set to “Romeo and Juliet.” He earned 174.42 in the free skate for a total competition score of 263.49.

“I think it was pretty good today,” said the 17-year-old from Seoul. “I really fought until my program finished. I really worked hard and tried my best, so I’m satisfied with my program today. I’m not satisfied with my quad toe, because I made the same mistake I did last time at Skate Canada. I missed my first jump, but I controlled myself really well and did everything else later in the program. I really worked hard until I came here and I think it was a really good experience for me to do so. I have a lot of competitions left, so I don’t want to get injured and stay healthy.”

Michal Brezina of the Czech Republic was unable to hold his third place from the short program, dropping to fourth in the free skate due to a fall on his quadruple Salchow. In his AC/DC medley routine, the Skate America silver medalist managed six triple jumps, including two triple Axels. Hr received a free skate score of 166.05 for a total competition score of 255.26.

“Well, it was not that bad,” he said of the performance. “I know there was one mistake and I can’t really do anything about that now. It was okay in practice. It was good in the warm-up. But I lost the concentration during the turn, slipped a little bit off my edge, and as a result, ended up slipping off of my edge at the landing. Coming back here after such a long time, most likely finishing fourth – it’s not bad! I’m happy with the way that I skated both of my programs. I am just happy to be done. I finished the beginning of this season pretty strong, I think it’s a good step for Europeans. I just have to keep training, keep doing what I’m doing and not poop my pants in hard jumps.”

Keegan Messing of Canada took a tremendous tumble on his triple Axel however, the jubilant skater was able to crank out his first quadruple Lutz in competition. During his “Charlie Chaplin” free skate, the 2018 Canadian silver medalist managed four triple jumps to earn 156.49 points in the free skate to finish with 236.05 points overall.

“The first competition quad Lutz, that was the positive,” exclaimed Messing. “Right out of the gate, I fought for every little thing out there. I only really made only one big mistake on the Axel and there were a lot of shaky elements right there. I skated my first Grand Prix Final and I skated as strong as I could.”

Russian Sergei Voronov settled for sixth place with an error-filled routine set to “Way Down We Go.” The NHK silver medalist earned 143.48 points in the free skate for a total combined competition score of 226.44.

“It was not an easy performance, and also being first does not help the case,” he said. “I was fighting for every jump, and yes not all went well, but most of all it was a battle with myself. I did not come out as a winner, but I was victorious at the parts which I lost previously. Not everything worked out, but I went for everything.”