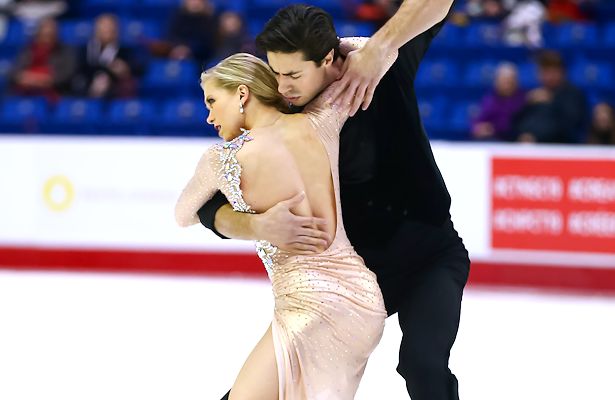 Kaitlyn Weaver and Andrew Poje’s return to competition at the 2019 Canadian Tire National Figure Skating Championships offered no evidence of their having lost a step in their time away, as they vaulted clearly into first place in the rhythm dance with a score of 85.19. The team ended the 2017-18 season with a return to the podium at the 2018 World Championships, but, after winning by a wide margin at the 2018 Autumn Classic International, they opted to sit out the Grand Prix season in favor of a nationwide tour with several of their fellow Olympians.

Weaver and Poje earned level 4 on all elements apart from the diagonal step sequence (level 3), and in particular, achieved a perfect result on the Tango Romantica pattern dance that has bedeviled many competitors this season. They performed it as a compulsory dance in the 2009-2010 season, but Poje remarked that this previous experience was both “a benefit and a detriment” in light of the fact that the “style of execution” of the pattern was very different in an environment where success is now judged on keypoints.

“There were a couple of moments when we were just exhausted, but we always came out the other side thinking ‘you know what, we’re doing this for a reason, and that’s to learn from all of it,'” Weaver commented on their time away. “This week, we’re here just to show ourselves. We’re having fun showing off, if you will.”

Poje concurred, adding: “We aren’t here, really, for the medals. We’re here to win in our hearts and our spirits because we wanted to go out there and show the work that we’ve done as well as the love that we have for these programs.”

Close behind in second place are Piper Gilles and Paul Poirier, who earned a score of 83.08. Like Weaver and Poje, they earned a level 4 on their lift and twizzle elements, as well as a level 3 on their step sequence, but they lagged on the Tango Romantica, earning a level 2 on the first portion of the pattern and a level 3 on the second.

Poirier said that they were happy with the results as the program still exists somewhat in the shadow of their disappointing error at the 2018 Skate Canada International.

“Piper and I set a goal of winning this competition at the beginning of this season,” he continued. “I think for tomorrow, specifically, we just need to let the program speak for itself.”

Gilles also teased, as an aside, a “secret project” in the works involving the British busker act Govardo, who supplied the cover of Don McLean’s “Vincent” for their acclaimed free dance program.

In third place following the rhythm dance, and making their Canadian Nationals debut, were Laurence Fournier Beaudry and Nikolaj Soerensen, with an impressive 79.41 score. Fournier Beaudry and Soerensen formed their partnership in 2012, but competed for Denmark through the 2017-2018 season when a desire to compete at the Olympic Games and the impossibility of Fournier Beaudry gaining the Danish citizenship necessary for that, led them to make a change of countries. As a result, they were ineligible to compete internationally in the fall, but the duo spent that time competing domestically.

Fournier Beaudry banished any thought that this was a respite.

“We took it like those competitions inside Canada were like international competition,” she said. “We kind of took this season as the same style we took for all the other past seasons we had.”

Soerensen agreed, adding that they aim to “keep pace with all our teammates.”

By any measure, their performance at nationals was strong, earning level 4 on all elements other than the diagonal steps, which was graded at level 3. They were the only team other than Weaver and Poje to earn perfect marks on the Tango Romantica pattern.

Soerensen was effusive in his praise for the volunteers who made the event possible: “We’re really doing nothing compared to these guys. Our job is like 40 minutes a day and we go back to bed, and we have all these amazing people who are just fans of skating, which I’ve never seen anything close to anywhere else.”

In fourth place and rounding out the final flight for tomorrow’s free dance were Carolane Soucisse and Shane Firus, whose modern tango routine earned a score of 73.36 points. They achieved level 2 and level 3 on the two portions of the Tango Romantica pattern, level 4 on their twizzles and lift, and a level 3 on their midline step sequence.

“Performance-wise it was good,” Soucisse said. “We maybe dropped a few levels here and there, but overall we were happy with our skate.”

“We had a good energy,” Firus added.

Looking to tomorrow’s free dance, Firus explained that they had opted to return to their previous season’s free dance as the Weeknd medley that they performed through the Challenger and Grand Prix series was not getting the scores from the judges that they had hoped for. Firus said they aimed to “put on a show,” while Soucisse said she was looking forward to “a solid skate, like we’re able to do, and maybe a bit more tight technically.”