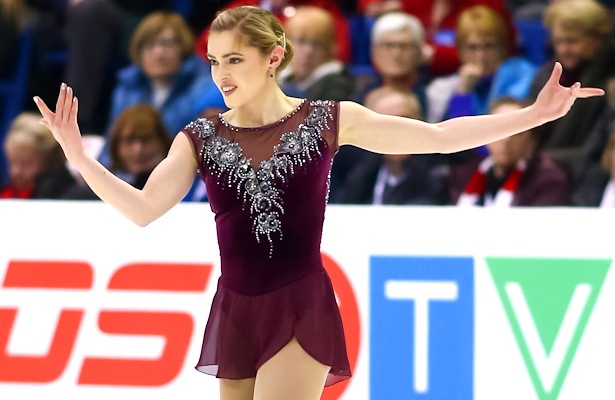 Alaine Chartrand catapulted from fifth to first place to capture her second national title at the 2019 Canadian National Figure Skating Championships on Saturday. Aurora Cotop rose from sixth to second, while Véronik Mallet maintained third to earn the bronze.

After a Lutz error left her in fifth place going into free skate, Chartrand vowed to be better in the free skate, and said that she was perhaps better suited to coming back from behind. She kept her promise, delivering a decisive win in the free skate with a score of 126.69, taking the title overall with 185.91 points.

Despite underrotation calls on three triple jumps, Chartrand delivered two clean double Axels (one in a three-jump combination with a triple Salchow), a triple Lutz, and triple loop. She earned level 4 on her step sequence and two of her spins, with her change combination spin graded as level 3.

Chartrand, the 2016 Canadian National champion, had suffered many disappointments in subsequent seasons, and spoke in particular of missing the 2018 Winter Olympics. Returning to the top of the podium again was “crazy” in her words.

“I’ve been really enjoying my training every day,” said the 22-year-old when reflecting on her new training environment and new approach to skating. “I think just not having those high expectations on myself and just wanting to finish happy has been a different mindset and helps have a good performance.”

Finishing some sixteen points behind Chartrand was the new national silver medalist, Cotop. The teen landed five clean triples as well as two double Axels and received level 4 on all her spin elements. With 110.37 points, she had a total score of 169.35.

Cotop was thrilled, saying “it was one of my best programs, because my run-throughs weren’t as good, so I feel like I sort of rose to the occasion.”

Still dealing with the aftereffects of bone marrow edema, Cotop’s full arsenal of jumps was not available to her in this competition, but she said “I did what I could.” She praised her coach, Ravi Walia, for helping her improve her skating and performance qualities.

“I feel like we worked on that more than elements, because Ravi’s really trying to push me to get better confidence and better flow and edge in my performances,” said the 16-year-old.

As Cotop currently lacks the senior technical minimums necessary to go to the Four Continents and World Championships, the skater said she was more immediately thinking of the prospect of attending the World Junior Figure Skating Championships. Her injury compelled her to withdraw from the Inge Solar Memorial in the fall.

While Chartrand and Cotop rose from fifth and sixth place to the podium, Véronik Mallet, third after the short program, remained in third place when the dust had settled, despite errors in the free skate. She earned 107.98 for her strong Adele free program, for 168.53 overall, only slightly behind Cotop. Her mistakes were a fall on a triple loop attempt and a popped Axel, but the rest of her jump elements were successfully executed.

A national bronze medalist for the second time in her career (the first being in 2015), Mallet’s focus after her skate was on future possibilities. Attending a World Championship remains something she has yet to achieve. “We’ll see what Skate Canada decides,” she said.

Meanwhile, Mallet also noted that her foot “is good now,” and in future seasons, has an eye on reintroducing the flip and Lutz into competition, and possibly also triple-triple combinations.

Larkyn Austman, who was second after the short program, finished fifth in the free skate with 103.60, and 168.13 overall, just 0.40 behind Mallet. The free skate unfortunately was difficult, with a fall on her final triple Salchow jump a popped flip, as well as several other errors. The skater was visibly upset afterward.

Defending national champion Gabrielle Daleman, in first place after the short program, also experienced an error-strewn free skate, falling three times and receiving underrotation calls and negative GoE on other jumps. She placed eighth in the free skate with a score of 96.74 points, and 166.92 cumulative points, leaving her in fifth place overall.

“It was honestly crap,” Daleman said frankly. “That’s not how I trained it, and I’m very disappointed with how today went.”

Daleman’s struggle with depression and the aftereffects of concussion had been publicly known for some time, and after a strong short program, she was dispirited.

“It was a victory to be out here and actually have the courage to put myself out here,” she said, “but definitely this is going to take me a few steps back to where I was, because I was building up confidence. This is going to set me back a bit, but this is a long journey ahead of me.”

Michelle Long, who was sitting in eighth place after the short program, finished fourth in the free skate (106.64 points), and rose to sixth place overall (161.40) points).