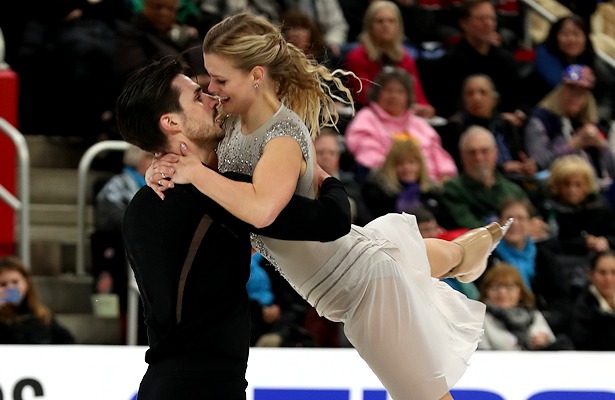 Hubbell and Donohue scored 131.32 points for a first-place finish in the free dance after their dramatic performance to music from the modern-day Romeo and Juliet soundtrack. The team displayed strong level 4 midline steps and difficult lifts, however, his twizzles were graded a level 3. They scored 215.88 points overall to win their second consecutive national title in their eighth appearance at this event together.

“I think Zach and I have grown a lot over the years training in Montreal,” said Hubbell. “One thing we learned is to put out our best performance and not to beat our competitors. Each competition is new, and in less than a week, we’ll head to Four Continents with these two teammates and some strong Canadian competition. We have put so much energy into getting levels and GOEs, and we want to make the story more beautiful.”

After winning the 2018 World silver medal, Hubbell and Donohue remain undefeated in all international events this season, including the 2018-19 Grand Prix Final. Three former U.S. ice dance champion teams, including Meryl Davis and Charlie White, presented them with their awards in Detroit.

“We got a little awestruck seeing them all out there,” said Donohue. “To be a part of that journey in any way is an honor.”

Chock and Bates were crisp and precise in their routine to “Fever” and “Burning Love” by Elvis Presley, showcasing level 4 twizzles, one-step footwork, and lifts. They received high grades of execution on all elements to finish second in the free dance and overall (129.19 / 211.52).

The two-time World medalists and 2018 U.S. national bronze medalists withdrew from their two Grand Prix events as she was still recovering from surgery on her ankle.

“We’ve been progressively getting healthier,” said Bates, “but I do feel that we are just getting started with our three-year journey. It’s not something that happens in six months, and our coaches warned us of that. We are really happy with the performance here in Detroit. This self-belief is a belief in each other, our training mates, and coaches, and that is a strength that will carry us back to where we want to go.”

Hawayek and Baker showed confidence and good expression in their free dance to music by The Irrepressibles. The team, who was 4th last year, earned a level 4 on all elements except for Baker’s twizzles (level 3) and finished third in the free dance and overall (120.18/196.95).

“I think for us, moving to Montreal, has not only been more than a revelation in our skating, but growth as people,” said Hawayek. “Not just as skaters. We feel fuller as people, not just training with our teammates here, but 16 other training mates. We feel inspired to improve with everyone. It’s a great training center that we’re happy to be a part of. It makes us feel able to skate more openly and freely, and I think we’ll continue that for the next few years.”

Lorraine McNamara and Quinn Carpenter put out a mature and expressive routine to music by Yann Tiersen and the Piano soundtrack to finish fourth in the free dance and overall (116.68 / 191.10).

“We’re happy,” said McNamara. “What’s most important is how we feel with our skate, and we’re definitely happy with it.”

Christina Carreira and Anthony Ponomarenko showed lots of passion in their free dance to music by Tokio Myers, and finished a close fifth overall (114.78 190.01).

“We try to do one element at a time,” said Carreira. “So once that’s over, it’s over. We feel more comfortable with our skating. It’s an honor to be on the ice with these people, and that was our goal, to be in the last warm up.”

“I don’t know if I have ever had this much fun,” said Manta. “This program is so special to us and it’s been a really special season. We do it because we want to put out a performance and entertain people and make them happy and feel something. It’s an honor to do that.”

The top three teams were named to both the Four Continents and World Figure Skating Championships.