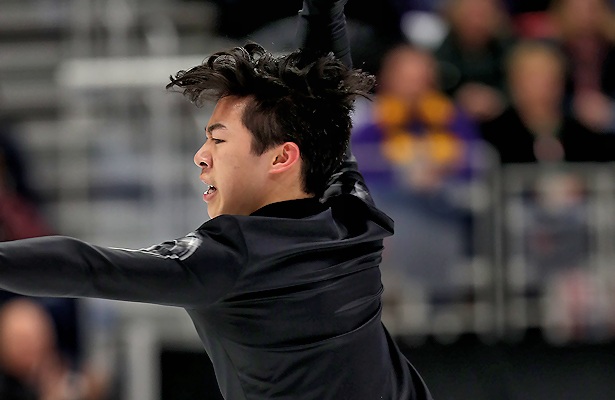 Nathan Chen took his third national title with nearly 60 points to spare on Sunday at the 2019 Geico U.S. National Figure Skating Championships. Vincent Zhou earned his second silver, while Jason Brown won the bronze in his eighth appearance at this event.

Chen became the first man to win three-consecutive U.S. titles since Johnny Weir did so from 2004 to 2006. The world champion landed four solid quads in his routine to “Land Of All” by Woodkid: a Lutz, flip, toe, and toe in combination with a triple toe. He was also landed six triple jumps while displaying level 4 spins and footwork, earning many high grades of execution (GOE) on all elements along the way.

“I’m happy with what I did, and hopefully I can do that in other competitions,” said Chen, who also won the Grand Prix Final in December. “The first few jumps are a little like a checklist, and once I get done with that, I can focus on the music and the audience. Nationals is no joke. You can’t discount any of these other skaters who are here.”

“I’m really proud of myself with all of the work I put in,” added Chen, who was fifth in PyeongChang, “and it’s an honor to be up here with these two guys. I don’t mind the training atmosphere I am in, and I am so thankful Yale has given me the ice time to pursue my dreams outside of school. I feel like I am improving competition to competition. This gives me a lot of confidence going into the future”

Zhou’s long program to the soundtrack of Crouching Tiger, Hidden Dragon began with an excellent quad Lutz-triple toeloop combination, however, he then under-rotated a quad flip and a quad Salchow before downgrading a quad toeloop. However, he landed two solid triple Axels and earning level 4s on elements.

“I’m happy with the results, but there is still so much room for improvement,” said Zhou, who won bronze at U.S. Nationals in 2018. “That gives me hope for the future, because to achieve what I did this week, and still have room for growth, is a good thing. I look forward to Four Continents and the World Championships.”

Brown doubled his opening planned Salchow, but recovered to a land a solid triple Axel-triple toe in his routine to a Simon and Garfunkel medley. The skater popped another Salchow, but landed five more triples, showing strong footwork and spins throughout.

“It wasn’t the best skate,” said the 2018 Four Continents bronze medalist, “but I have been building and building, working really hard on all of the changes I’ve been making. I’m happy to be back on the U.S. podium. I have two of the most experienced coaches, who were athletes themselves, and they take new skaters and mold them into stars in the skating world. We’re all learning from each other, and we all respect each other so much. It’s all about focus and putting in the time and work.”

The 2015 U.S. champion, Brown also won bronze in 2017 and moved to Toronto to train with Tracy Wilson and Brian Orser last year.

“I feel lucky that Nathan is a teammate,” said Brown. “I admire him, and it’s unbelievable that he’s pushing the sport in ways that I could have only dreamed. It pushes me to every boundary.”

Tomoki Hiwatashi wound up with the pewter medal in fourth place with a free skate of 169.23 and an overall score of 253.28. The 18-year-old under-rotated his opening quad Salchow (in combination with a triple toe) and put a foot down on the landing of a triple Axel in his routine to “Fate of the Gods.” Despite the mistakes, he still landed a clean triple Axel-double toe, as well as five more triples, displaying level 4 spins and footwork throughout.

“In past Finals I did terribly,” said Hiwatashi, who was 12th in 2018. “I had to fix something because I was just happy to be there. I stayed focused and relaxed, and I did great. Especially, since I moved to Broadmoor and I’m with Camden (Pulkinen), Vincent (Zhou), Andrew (Torgashev), Mirai (Nagasu), and sometimes Rika Kihira and Satoko Miyahara. There are so many great skaters around me, and it makes me want to get to that level. I need to work on skating skills, not just changes in jumps, and I need to work on strengthening my body.”

“This was a big step forward for me,” said Krasnozhon. “I need quads, triple jumps and better endurance. For each quad, it’s a different approach, and I just need to listen to my coach.”

The top three men earned a trip to the upcoming World Championships. Brown, Hiwatashi, and Zhou were selected for the Four Continents next month.