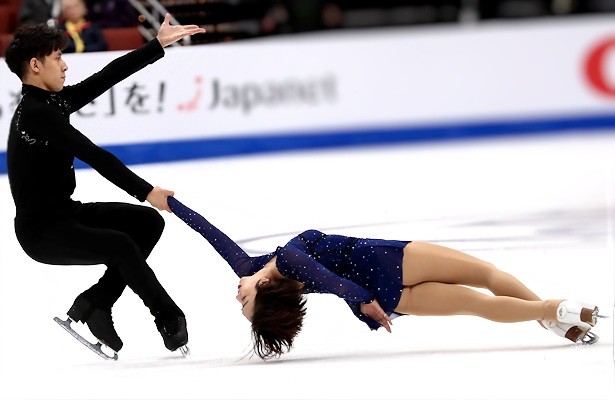 Sui has been plagued with various foot injuries off and since the 2012-13 season. This season, the 2018 Olympic silver medalists withdrew from both of their assigned Grand Prix events as she continued to recover. They competed their short program at the 2019 Chinese Champions, but withdrew before the free skate.

The skaters, who partnered up in 2007 and are coached by Hongbo Zhao, Bing Han, Jinlin Guan in Beijing, China, were thankful for the help and support they received from the Chinese Skating Association after the Olympics.

“The journey is really long,” said Han. “They helped us not only mentally, but also in our daily life, and we really feel the tremendous support from them.”

“This time I think we actually had time to recover and relax,” said Sui, regarding the stress fracture to her right foot after the Olympics. “We are very excited and happy to come back to the competition, and we feel like we really belong to the rink.”

Sui had actually forgotten about the first time they missed the Grand Pix and came to the Four Continents during the 2015-16 season.

“I think we all experience different things in our lifetime, and so are the competitions,” she said of their comeback. “The second time (2016-17) was after my surgery, and it was a pretty tough time. I was not sure if I could still skate or come back to compete and enjoy the competition. I was only thinking about what I should do each day but didn’t actually get to experience the atmosphere at the rink.”

In Anaheim, the team placed second in their short program. The only glitch was when Sui fell on the side-by-side triple toes.

Sui admitted the fall “hurt a lot” and that she was a little too excited. “Even in the practice, I felt like I couldn’t control myself and skated a little too fast. I think we didn’t adjust our conditions too well, because in our practice, we were normally able to skate clean in the short program. The mistake was pretty unexpected.”

Han said they went through a lot of “bittersweet moments” during the short program and in the end, felt they only did eighty percent of what they were capable of.

“We felt a little nervous and tight,” he explained. “We had to recover from injury, learn the techniques from the very beginning, and still be become able to withstand the weight from throw jumps again.”

In the free skate, Sui fell again on the side-by-side triple Salchows. Still, their routine was mesmerizing, and they were solid throughout the rest of the performance. They scored 136.92 for first in the free skate and edged out Canadian champions Kirsten Moore-Towers and Michae by .06 points from the top spot with a total score of 211.11.

Despite the win, the pair was not entirely satisfied.

“I feel that we didn’t do very well because our practice time is so short,” said Sui. “This is the third time that we performed our long program. For the past ten days, we couldn’t practice every day.”

Han said the free skate was actually the worst compared to their practice run-throughs.

“We can see the insufficiencies and room for improvement on the detailed result,” he said. “There are problems like difficulty level, quality, etc. To be honest, there are still some technical elements that we haven’t put into the program.”

“The time was relatively short for injury recovery after the Olympic Games,” he added, “so we only had three months after the choreography of the program. We gave all our efforts during these three months, but that’s still not enough judging from our performance.”

Nevertheless, they felt the competition was a good motivator for them and enables them to reflect and improve before the World Championships.

Sui and Han are using “Rain, In Your Black Eyes,” beautifully choreographed by Lori Nichol, for their free skate.

“Lori tried to let us do more different emotions and positions on the ice,” said Han of the process. “We love this music and there’s more emotion and support in the last part. Wenjing also loves this music.”

Nichol has a very large and ever expanding playlist of possible pieces for Sui and Han. Due to unforeseen circumstances, however, they had very little time to share ideas and concepts and create programs for the Olympics.

“This last season Wenjing had another injury that was very difficult for her and Cong,” said Nichol. “We used the unexpected time to investigate many ideas, emotions, and movement. Even with their extensive playlist, I spent the weeks before they arrived listening between 8-12 hours a day for the right feeling on the ice. After developing the “Rain” idea I could not sleep at all, I was so inspired. When I presented the full idea, we all felt an immediate, instinctive, and emotional reaction to “Rain.”

“The life and challenges of the composer, Ezio Bosso, was a big factor in our connection to the music, to his soul, to struggles and humanity,” Nichol explained. “I knew without a doubt this was the piece for the long. For the short there were two pieces I loved for this season. I won’t mention the other choice as we may still use it someday!”

The skaters had more time this go around to delve into the ideas with the new programs. However, they had to be very careful and grow gradually due to Sui’s injury and recovery.

“We became very resourceful in how to expand our minds, develop ideas, and progress through the health challenges,” recalled Nichol. “On the one hand, it was a pleasurable luxury of time for artistic growth, yet on the other hand, it was a lot of pressure to keep her healthy and create pieces we knew could be very special. Our goal was to see everything with a new lens, create new ideas, new elements and layouts etc. and feel what was painful and truly beautiful in life and express everything authentically.”

“It was also frustrating because as we took our minds outside of the box, we found many amazing ideas/movements etc and then realized that  “amazing” wasn’t going to earn any points and “amazing” might be against the rules,” Nichol pointed out. “I truly understand the reason for and respect rules, yet at the top in all disciplines, I see mind-blowing skating that will never be seen. Often, in a working session when it happens, I ask the skater(s) to do it again and enjoy it for what it is and then we find a way to let it go and move on. I’d like to say these things can then be done in show programs, but the reality is skaters are so incredibly busy all day training that these difficult movements and concepts would require time that we just won’t have.”

The renowned choreographer records just about everything during sessions and never gives up hope.

After pocketing their fifth Four Continents title, the team is now preparing for the 2019 World Figure Skating Championships which will be held in Saitama, Japan, from 18 to 24 March 2019.

“We see our shortcomings and what we can improve in this competition,” noted Han. “So, after we go back, we will follow the systematic training plan designed by our coach. In terms of technical difficulty, we certainly will not stay at the current level. We will improve not only the difficulty, but also quality. Compared to the short program, I think we need to spend more time on the long program.”