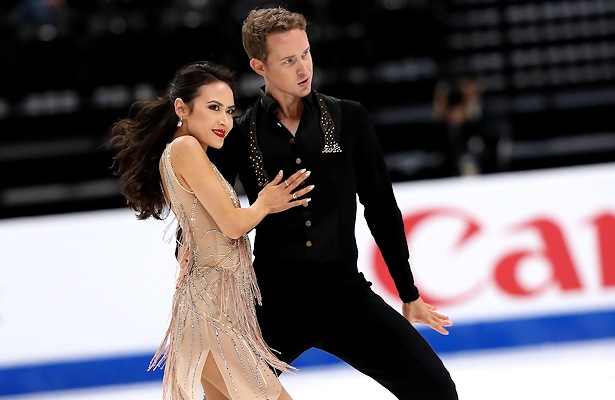 In a surprising turn of events, USA’s Madison Chock and Evan Bates took gold in the the Ice Dance at the 2019 Four Continents Figure Skating Championships on Sunday afternoon, while teammates Madison Hubbell and Zachary Donohue slid to fourth place. Canadian champions Kaitlyn Weaver and Andrew Poje won the silver, while teammates Piper Gilles and Paul Poirier earned the bronze.

Chock and Bates delivered a playful and crowd-pleasing routine to “Fever” and “Burning Love” by Elvis Presley, showcasing level 4 twizzles and lifts. The diagonal steps were graded a level 3 as was Chock’s one-step footwork. They received high grades of execution (GOE) on all elements to finish first in the free dance and overall (126.25 / 207.42).

“It feels incredible,” said Chock of their win. “We didn’t set any expectations as far as placement, because that’s not why we are skating. We have this new found joy and happiness when we are skating and we want to share that and that is our main goal this season. Every step was fun.”

“We got a lot of medals, none of them are gold,” said Bates. I am surprised. If you had told us that we would win Four Continents when we pulled out of the Grand Prix for months ago, I think we would be very surprised. But we’re very happy now. This was our third competition in five weeks, so we felt a little bit nervous today just knowing that were were running on fumes a little bit.”

“We were definitely tired,” she added of all the competitions. “We’re not superhuman, but we are so well-trained and we do the recovery to take care of our bodies and that’s so important, especially at our ages. We take it very seriously and we love what we do.”

“We’re so proud of our performances at Four Continents; we keep building,” said Bates. “Now we have a little bit of time to prepare for Worlds and we will take a bit of a rest before we get back to training. We haven’t had the opportunity to make many changes to the programs since our debut in Poland (before U.S. Nationals). I think we can finally digest all of the feedback, and if we need to make any bigger changes, then we can do that now. We’ll talk to our coaches when we get home and sort it all out.”

Weaver and Poje earned a new season’s best of 123.37 for a third place finish in the free dance, but second overall a total of 203.93 points. Their lyrical performance to “S.O.S. d’un terrien en détresse” from the French musical Starmania, featured level 4 lifts and twizzles, while the diagonal steps  and Poje’s one-foot steps were graded a level 3.

“We feel really proud of our skate today,” said Poje. “We went out there to try and perform the whole story behind our performance. We were more connected today than yesterday’s performance.”

The Canadian champions chose this piece as a tribute to figure skater Denis Ten of Kazakhstan who died seven months ago.

“It is a very emotional piece,” said Weaver. “It was the last program he performed. He was a very dear friend of ours, so every time this music plays, we think of him. It is a great inspiration because he was not only an amazing skater, but an amazing person. We just hope to give our best to him through this.”

“It is our first international competition back and we are just trying to get the feel for that again,” he said of what they took from this experience. “Our goal is really for Worlds and this is just a test for our emotions and technical components out there and get the feedback we need so we are prepared for World Championships.”

“I think that this season is unique for us because we don’t measure ourselves against numbers or other people anymore,” said Weaver. “We want to make ourselves feel good. At the end of every day, if we feel good about our training, then we can move on and be positive about it. So that is what we hope to do for the World Championships.”

Gilles and Poirier finished second in the free dance with a new season’s best of 202.40 and third overall (202.45). Their routine to “Vincent (Starry, Starry Night)” featured level 4 twizzles and lifts, while their one-step footwork and diagonal steps were graded a level 3. However, the Canadian silver medalists received a one-point deduction for an extended lift.

“We’re very happy with what we put out there today,” said Gilles. “Every time we perform this program, it feels a different emotion. We loved what it felt at Nationals. Today it felt hard, but it still created that magic. It’s nice to know that whatever our body and emotions bring to the table that day, we can perform it.”

“After having Evan (Bates) and Maddie (Chock) and Kaitlyn (Weaver) and Andrew (Poje) ahead of us, it definitely wasn’t something we were expecting,” said Poirier of making the podium. “We’re really proud of the free dance that we put out today. We really created a moment and that was well-reflected in the scores we got, by far the highest components we’ve ever gotten on a program. It’s really exciting for us. It’s the step we wanted to take at this event and sets us up well for Words. It shows us that we’re on the right track and where we can continue to do better.”

“We can still improve on the rhythm dance,” said Gilles. “We’re quite small compared to some of the other teams so we have to work on opening it up and making it bigger for the audience so we don’t look like the ‘short team.’ For the free, we’ll keep working on creating special moments. I think we’re feeling the momentum and our goal is to be on the podium in Saitama.”

Hubbell and Donohue scored 119.71  points for a fourth-place finish in the free dance after their dramatic performance to music from the modern-day Romeo and Juliet soundtrack. The team displayed strong level 4 midline steps and strong twizzles, however the opening stationary lift only received the base value due to “traveling.” The team also only earned a level 2 on the dance spin, and the overnight leaders scored a total of 201.66 for fourth place overall.

“The performance was actually not disappointing at all, we’re very pleased overall,” said Hubbell. “Our first lift, which is a stationary, is considered to travel just so much that we did not get any level or GOE for that element. That’s very unfortunate. Certainly we would rather it happens here than the Worlds, so maybe it’s a good wake-up call to make sure that everything is good for Worlds.”

“Obviously our goal is go similar to last year,” she added about their goal for Worlds. “Level four on all elements, give two strong performances, and I think with that we could end up at the top. We will go home and work in the next five weeks to do absolutely our best in Japan.”

“We feel very good,” said Hawayek. “It was a season’s best score-wise and performance-wise and we both felt like it was our strongest showing yet. We’re still working on little details and levels and making sure that we’re at the program’s fullest potential by March in Worlds. We’re really happy for this stepping stone. ”

“It was nice to be part of such a high level competition,” said Fournier Beaudry. “We did a few mistakes, but overall, we’re very happy with our performance.”

“The organization was great,” added Sorensen. “We had a lot of fun at this event and on the ice. We’ve been working a lot on the performance aspect of our program.”