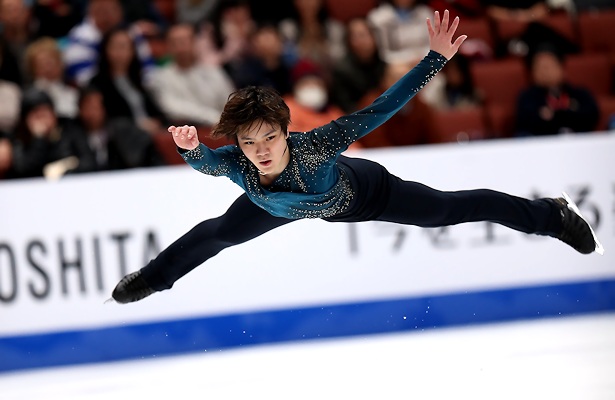 Japan’s Shoma Uno rebounded from a fourth-place short program to capture the gold in the Men’s event at the 2019 Four Continents Figure Skating Championships on Saturday night. Defending champion Boyang Jin of China moved up one spot to win silver, while USA’s Vincent Zhou earned the bronze in his debut at this event.

Uno was brilliant in his measured and smooth routine to a modern version of “Moonlight Sonata.” The only major error came when he stepped out of the back end of a triple Axel-Euler-triple toe. The 2018 Olympic silver medalist otherwise landed a quad flip, quad toe, quad toe-double toe along with two triple Axels. He also earned level 4 on all spins and footwork.

The 2018 Olympic silver medalist  immediately “collapsed” to the ice with relief at the end, rebounding from a sub-par short program where he placed fourth. He earned a season’s best of 197.36 for first place in the free skate and overall (289.12).

“I think I was able to do everything I can, but I believe there is a lot more I need to do to be competitive at the top,” said the 2018 World silver medalist. “Instead of just pulling myself back, I believed in doing what I had to do and I kept going. There weren’t a lot of happy emotions when I collapsed, it was like, ‘I really did it’. I thought about how I was injured after nationals and how I can bring it (my skating) to the next level.”

Jin stepped out of his opening quad Lutz, but came back to land a quad toe-double toe and solo quad toe. The Chinese national champion also landed six more triple jumps, including two Axels. He looked more comfortable in his Spanish-themed routine which featured level 4 footwork, and topped his season’s best from Helsinki by a whopping 40 points (181.34). With a total score of 273.51, he rose up one spot to cinch the silver.

“I’m satisfied overall, but it’s not as good as my training these days,” said last year’s champion. “My skating wasn’t that relaxed. Two minutes before stepping on the ice, I decided to not do the quad Salchow in my program and change some of the choreography. After the nationals, I wasn’t able to skate this program that much, so having one less quad makes it a little easier for me.”

“I think I adjusted myself mentally a little bit now,” said the 21-year-old of his marked improvement. “I just want to use the competition experience I have now to compete and enjoy the competition. I think I’m way calmer than before, so I feel like there’s no such difficulty that I cannot overcome in the future.”

Zhou put out a dramatic routine to music from Crouching Tiger, Hidden Dragon, however, the back end of a quad Lutz-triple toe was underrotated as was his solo quad Salchow and quad toe. The skater also stepped out of the back end of  triple Axel-double toe. While the mistakes were costly in the long run, the U.S. national silver medalist still earned a new season’s best of 172.04 for a fifth-place finish in the free skate. However, his total score of 272.22 resulted in third overall.

“I thought that I skated great today,” said the 2017 World Junior champion. “The most important thing that I got from today was the love for the sport. The audience was absolutely incredible and they helped me feel good about how I skated. I think that I did a good job at this competition and I made many improvements upon my previous performances. I did a very good quad Lutz at the beginning, but then my mind got a little blurry going into the quad Salchow and that could have been better.”

Skating after Uno, Keegan Messing of Canada seemed unfazed and just settled in and enjoyed his crowd-pleasing “Charlie Chaplin” routine. The only glaring error was a tight landing on a quad toe in combination with a double toe, but the 2018-19 Grand Prix finalist otherwise landed a solid quad toe, as well as six triple jumps, to finish third in the free skate with a new season’s best of 179.43. His total score was 267.61 and he moved up from fifth to fourth overall.

“I’m very excited!” said the 27-year-old. “I think that’s the highest score I’ve ever put in the program. My fiancée surprised me this morning by showing up, so I got on practice this morning, and I was skating around, all tired, because this is day five, and my coach was like, ‘hey did you know she’s here?’

Messing admitted to feeling pressure when taking the ice after Uno’s performance, but he said it also excited him.

“I knew he skated well,” said the 2018 Skate Canada silver medalist. “Then I heard a 190-something from the crowd, and I was like, ‘What! Wow that’s a huge score!’, but it also made me more excited and try the hardest out there.”

USA’s Jason Brown finished fourth in the free skate with a new season’s best of 172.32. His routine to a Simon & Garfunke medley featured excellent footwork and spins, however, the 2018 Internationaux de France silver medalist underrotated and stepped out of his opening Salchow and later underrotated a triple Axel. He finished in fifth place overall (258.89).

Ever exuberant, Brown said: “I’m very happy! I know I still left a couple of points out on the table, but every competition it’s getting stronger. I’m so proud of my fight out there and scoring my season’s best today. I’ll keep building onto that momentum into Worlds.”

The 2019 U.S. national bronze medalist was determined to rotate his quad Salchow. “I’m working on the quad every single day. It’s not quite there in the program yet, but I’m landing them more and more out of the program. It’s early in the four-year cycle to the 2022 Olympics, so I want to keep putting it in to gain experience so that when it’s very consistent, it’s in the program and ready to go.”

Keiji Tanaka of Japan showed spark in his routine to “William Tell Overture,” landing a quad Salchow-double toe, quad Salchow, and two triple Axels. The only errors came when he doubled a flip and then got too close to the boards and had to single the back end of a triple Lutz-Euler-triple Salchow. Nevertheless, he earned a new season’s best of 167.61—a huge improvement since 2018 Ondrej Nepela where he won bronze. His total score was 251.54 for an overall seventh-place finish.

“I was able to execute good jumps in the first half, but I couldn’t maintain my stamina, which is one of my weaknesses,” observed the 2019 Japanese national bronze medalist. “I want to work hard on it. I was able to focus on the quad Salchow and nailed it. I had a rocky start of the season, but was able to reap the rewards, and I want to take this momentum into the Worlds. I will continue to grow on what I learned from the mistakes I made in this competition, both in short program and free skating, and prepare myself for Worlds.”

Looking calm and focused, USA’s Tomoki Hiwatashi, gave a respectable performance to “Fate of the Gods” in his debut at this event. The 2018-19 Junior Grand Prix finalist nailed his opening quad toe-triple toe and as well as two triple Axels, but underrotated a triple Lutz and triple flip (in combination with a triple Lutz-Euler). The 19-year-old was still thrilled with his season’s best of 159.84 (seventh place) and finished eighth overall (236.79).

“It just felt great to be on the ice since the Four Continents was here in America, in L.A.,” said the 2018 JGP Richmond and Ljubljana silver medalist. “I feel like there was a lot of people who cheered me on. I was surprised when they called my name when I finished my program. I’m really glad that I did the greatest program I’ve ever done in my life here and I wish everyone had a great time watching me on the ice.”

South Korea’s Junhwan Cha, who stood in second after the short, struggled with his jumps in which six were called as  underrotated. He finished eighth (158.50) in the free skate and slipped to sixth overall (255.83).

“I am actually satisfied,” said the 2018-19 Grand Prix Final bronze medalist. “My technical jumps were not perfect, but I tried my best until the end of the program, so I am happy about fighting it through. This was my first senior championships, it was a good experience for me. I learned a lot, especially about controlling myself when I got nervous and competing in front of a big audience cheering for me. At worlds I want to fight hard again and do my best. I had a lot of injuries last season, so I hope to get to worlds without any injury.”