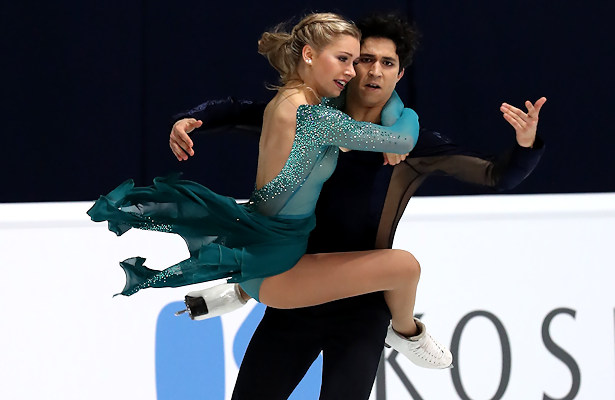 In their fourth appearance at this event, Canada’s Marjorie Lajoie and Zachary Lagha took the Ice Dance title at the 2019 World Junior Figure Skating Championships. Russia’s Elizaveta Khudaiberdieva and Nikita Nazarov won the silver in their debut at this event, while teammates Sofia Shevchenko and Igor Eremenko improved from their fifth-place finish last year with the bronze.

It was the first time in 13 years that a Canadian team had won gold at this event since Tessa Virtue and Scott Moir took the title in 2006.

Lajoie and Lagha gave a strong and dramatic routine to Warsaw Concerto which featured level 4 twizzles and lifts with high grades of execution. The one-foot step sequences were graded a level 2 and 3 while the midline steps were a level 2, and the spin was a level 4. The three-time Canadian national junior champions earned a new season’s best of 105.96 and maintained first place overall with nearly five points to spare at 176.10.

“It feels really good!” said Lagha on winning the title. “In the past two years we had a lot of disappointing results. After each of those competitions, we still stood up and we analyzed our program. We’re really happy that the work finally paid off.”

“We feel amazing because of this,” added Lajoie of winning the title 13 years after Virtue and Moir did. “They have been an amazing inspiration for us and we hope to follow in their footsteps.”

The 2018 JGP Canada champions will be moving up to seniors internationally next season.

“There are a lot of differences between junior level and senior level in ice dance,” noted Lagha. “From all of the seniors, only a few were good junior teams, and from good junior teams, only a few won Junior Worlds. Even though it is an important competition, it is not even the half of the battle. You have to work on those qualities like the softness of the skating, more connection between the pair. Those are the things to work on to move to senior field.”

Shevchenko and Eremenko performed a difficult and abstract routine to music by Onuka, Camo & Krooked, and Alina Orlova. The 2018-19 Junior Grand Prix Final champions also received a level 4 on their twizzles and lifts, and both ice dancers were graded a level 2 on the one-foot steps and the diagonal steps. The Russian national junior champions finished second in the free dance (102.87), but maintained third overall with a score of 170.43.

“I cannot really describe the emotions for this free dance,” said Shevchenko. “I think we have worked hard every day, so now we are able to sit here with these guys. This was an amazing season for us, so emotional, and it was the best season of our career. I am so happy and I also want to thank Igor and my coaches, my family and friends, everybody who supports us. They are all important.”

“We are so happy to perform here,” added Eremenko. “Our last junior program, especially the free dance, that makes us very happy. This was a big experience, all these junior years and next year we move to senior.”

“At this moment, I cannot think about this,” Shevchenko told the press when asked about moving up to seniors. “We have only finished our last junior competition. We want to share these important emotions and memories with close people and celebrate. Only after this we will deal with this.”

USA’s Avonley Nguyen and Vadym Kolesnik gave a powerful and passionate performance to “Demons” and “Experience,” which featured a level 3 and two on the one-foot steps and a level 3 on the circular steps. Their lifts and twizzles were a level 4. The 2018-19 Junior Grand Prix finalists earned a new season’s best of 102.72, finishing third in the free dance and moved up one spot to fourth overall (167.90) in their debut at this event.

“It was the last time we were performing this program and it’s so special to us,” said Nguyen. “We just wanted to enjoy it and we hope that everyone else did, too. We’re really happy that the last time we performed, it we’ve got our season’s best.”

“I’ve never been so nervous and excited at the same time,” admitted Kolesnik. “It’s our favorite program, we chose the music. I think we did a great job. It’s really sad right now that we’re done with it and have to move on.”

Khudaiberdieva and Nazarov finished fourth after giving an intense routine to “Human” and “Nemesis,” which displayed lots of emotion throughout. Their dance featured level 4 lifts and twizzles, level 2 one-foot steps, and level 2 circular steps. The 2018-19 Junior Grand Prix bronze medalists earned a new season’s best of 102.53, but were still able to maintain second overall with 171.22 points.

“We couldn’t even think about that result,” said Khudaiberdieva of their debut at this event. “We were the number three Russian team, a confident number three though. For us, it was more about overcoming ourselves than anyone else. We haven’t realized yet that we are second at our first Junior Worlds.”

“We are just so happy to be here and to be with these strong competitors,” added Nazarov. “Hopefully we can continue that way.”

“This will push us next season and will give us motivation and confidence,” Khudaiberdieva offered. “This season has been very tough, and our career… there were many moments when we were lacking just a little bit, just a few points, just a tenth of a point, and we are just so happy now and would like to thank our coaches.”

The Russian national junior bronze medalists are also moving up to the senior level next season.

“Now we have to work very hard and not lose the motivation,” said Khudaiberdieva. “We need to keep our individuality and develop our own style, improve technically, and also not do the same thing over and over again.”

“There are many teams in Russia, but if you look at the results at major events, they are not that great,” Nazarov noted. “But all these teams also once came up from juniors. We just have to work very hard in order to achieve something.”

Arina Ushakova and Maxim Nekrasov of Russia showed command and control in their routine to music from the Black Cat, White Cat soundtrack. The defending bronze medalists earned a level 4 on their twizzles and lifts, and scored 100.52 for a fifth-place finish in the free dance and overall (166.48).

Maria Kazakova and Georgy Reviya of Georgia produced a dramatic routine to Carmina Burana and music from The Ninth Gate to finish sixth in the free dance 95.32 and overall (155.40).

“Today we’re proud of ourselves,” said Reviya. “Not our season’s best, but the best skate of the season. There were some technical mistakes and we’ll work on them, but I’m happy my partner and I are moving in the right direction.”

USA’s Caroline Green and Gordon Green moved up one spot to seventh overall (153.05), followed by Loicia Demougeot and Theo Le Mercier of France (144.33) and Canada’s Alicia Fabbri and Paul Ayer (143.04).

Evgeniia Lopareva and Geoffrey Brissaud of France rounded out the top 10 (141.98).