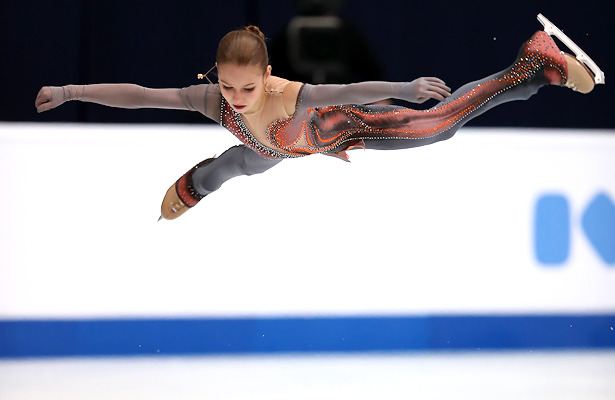 The 2019 World Junior Figure Skating Championships concluded with the Ladies event on Saturday in which Russia’s Alexandra Trusova defended her title. Teammate Anna Shcherbakova took the silver in her debut in this event, while USA’s Ting Cui pocketed the bronze, improving from a seventh-place finish last year.

Trusova fell on her opening quad Lutz attempt, but quickly recovered to land a quad toe-triple toe and a solo quad toe in her technically-packed and dynamic routine to selections of music by Tomoyasu Hotei and The Fifth Element soundtrack. The 2018-19 Junior Grand Prix Final silver medalist also landed five triple jumps, but received an edge call on a the flip. She was awarded level 4 on all spins and footwork to earn a new season’s best of 150.40 for first place in the free skate and overall (222.89).

“I am happy with my performance today, but I obviously need to work on my quads, triples, spins and skating skills,” said the two-time Russian junior national champion. “It was different winning the second time, but I can’t really tell if it is easier or not.”

“I already talked to Eteri Georgievna and she congratulated me and pointed out the mistakes that I made,” she said of her conversation with her coach Eteri Tutberidze.

The 14-year-old, who has been training the quads for nearly two years, hopes to get Grand Prix assignments for next season, but has not yet begun work on new programs. “The season is not quite over yet,” she said. She would like to learn the triple Axel and quad loop for next season.

Training mate and overnight leader Shcherbakova stepped out of her quad Lutz and received an edge call on her triple flip (in combination with a triple toe) in her difficult routine to Introduction and Rondo Capriccioso. The Russian national champion otherwise landed five solid triples and earned a level 4 on all spins, scoring the highest Program Component score and finishing second in the free skate with 147.08 points. However, with a total score of 219.94, she slipped to second overall.

“I am happy with my performance today,” said the 2019 European Youth junior champion. “There were some little mistakes I am going to work on, like the landing on the Lutz. It was not clean, but still better than last time.”

“Like Sasha, I began training the quads in April two years ago,” Shcherbakova said, regarding when she began working on the quads. “We started doing them at the same time.”

“I also want to compete at senior level next season and hopefully I also get assigned to the Grand Prix,” the 14-year-old said of her plans for next season. “We haven’t yet thought about new programs. There will be a lot of work in the off-season. We’ll work on skating skills, jumps and learn new elements.”

Cui landed a total of six clean triple jumps in her airy routine to Giselle, but fell on an underrotated triple flip. The 2018 Tallinn Trophy silver medalist also received an edge call on her triple flip (in combination with a Euler-triple Salchow). She earned a level 4 on two of her spins and footwork to earn a new season’s best of 126.72, finishing third in the free skate and overall (194.41).

“My program wasn’t clean like I was hoping for, but I am still very happy with it and how I skated and performed the character of the story,” said the 16-year-old from Colorado Springs, Colo. “This is my second Junior Worlds, so coming in, I was a little bit more relaxed because I knew a bit more what to expect. I am very happy I was able to medal and make it to the podium.”

“I did senior competitions this season, but next season I am looking forward competing with the older girls,” Cui said of her plans next year. “Ultimately, that is where I want to be. We all want to be competing at senior level. We are not sure yet about this and it is not official yet, but I may keep my short program. I will be getting a new long program. As far as elements, I will be working on a quad and hopefully will put it in the program next season.”

Her inspiration for for her Free Skate to Giselle was a collaboration between her and choreographer Derrick Delmore. “I have always looked up to Yuna Kim and just remember her “Giselle” program,” said Cui. “It made a huge impression on my mind and I always knew I eventually wanted to skate to Giselle some day. When I was a juvenile, I skated to act one of Giselle, so I thought it would be very cool to skate to act two, with more dramatic music.”

Ksenia Sinitsyna of Russia finished sixth in the free skate with her elegant routine to Trio élégiaque No.2 by Sergei Rachmaninoff with a new season’s best of 122.32. The 2018 JGP Amber Cup bronze medalist turned out a triple Lutz in combination with a double toe and underrotated the back-end of a triple loop-triple toe. The rest of the program was solid and featured level 4 spins. The layback spin, in particular, was rewarded with very high grades of execution, and the teen from Moscow maintained fourth overall with a score of 188.84.

“Not all elements were done as planned,” said the 14-year-old from Moscow. “Of course it would be better if I did all of them clean, but I have to work. Many competitions are ahead and I can show my best there. I feel responsible competing for my country and am very proud of it.”

Japan’s Yuna Shiraiwa landed a total of five clean triple jumps her sophisticated routine to Pictures At An Exhibition. The 2018 Asian Open silver medalist underrotated the back end of a double Axel-triple toe as well as a triple flip, but showed good level 4 spins and solid level 3 footwork to finish fourth with 123.38 points. She moved up one spot to fifth overall (185.46) in her third appearance at this event.

“I was a bit nervous and couldn’t skate one hundred percent,” admitted the 17-year-old from Kyoto. “This year and the last year I compete as a senior too, so I wanted to show I’m a mature skater, but today my performance wasn’t good enough. I want to improve my skills until 2022 Olympics, that’s my biggest goal.”

Young You of South Korea, who stood in 11th after the short, was overcome after her solid  performance to music to The Pirates of the Caribbean: At Worlds End. The 14-year-old from Seoul landed six solid triples, including a triple Lutz-triple toe, but underrotated a triple flip. This being the only major mistake, she was awarded a season’s best of 123.20, placing fifth in the free skate. With a total score of 178.82, she climbed from 11th to sixth overall.

“I’ve no regrets, I did my best,” said the two-time South Korean national champion. “I’m a little disappointed, because if I did better in the short program, I could get higher scores. But because of my new boots, I couldn’t do my one hundred percent. That’s the thing I’m really sad of.”

USA’s Hanna Harrell, who stood in fifth after the short, placed ninth in the free skate with a season’s best of 114.01. Her routine to “La Cumparsita” and “Adios Nonino” featured five triple jumps, including a triple Lutz-triple toe, however, both triple flips were underrotated. The 2018 Egna Spring Trophy junior silver finished seventh overall with 176.69 points.

“There were small errors like incorrect landings,” noted the 2019 U.S. national pewter medalist. “I know I can do better. This is my first time in the Junior Worlds and it’s a really cool experience. Not everyone can come to this competition, and I got an opportunity to experience it.”

“I’m disappointed with my performance today,”said the Japanese national bronze medalist. “After my double Axel, I lost the speed and missed a combo. I feel like I need more experience. Next season I’d like to try a triple Axel; I’m already learning it. I need to improve my spins as well.”