Russian pair skaters Natalia Zabiiako and Alexander Enbert took an important step forward this past season, winning their first gold medals in the ISU Grand Prix Series and their first World medal—a bronze. Looking ahead to the upcoming 2019-20 season, the duo is aiming higher and wants to establish themselves as the number one Russian team.

Both skaters feel that having more confidence and consistency was key in terms of their success.

“I can exactly say that it was very important and great for us that we started to skate the free progam as easily, calmly and consistently as the short program,” said Enbert. “Apparently, we needed some time for that. The short we’ve been skating almost always clean ever since we’ve skated together, from the very first season. We only a few times made serious errors. In the free, sometimes errors happened that probably stopped us from achieving the placements we would have liked to achieve.”

“This year, even in practice, all run-throughs [of the Free Skating] were almost clean,” Zabiiako agreed. “I never was too nervous, but just to know that we can skate clean not by chance and to know that it is easy to skate the way we needed, helped.”

However, there was one setback. Just after Russian Nationals, Zabiiako and Enbert withdrew from Europeans due to medical reasons. As it turned out, Enbert was not cleared to compete by the doctors.

“Tiredness accumulated,” he revealed. “Basically, the only recommendation of the doctors when I asked what I need to do to be able to go to Worlds was just to rest.”

At first the doctors ordered him to rest for three months, which would have meant their season was over. However, after further consultations with physicians specialized in sports medicine, Enbert was allowed to train following a specific plan.

“The experts gave me more detailed advice, such as that my pulse could not exceed 140,” the skater, who turned 30 in April, explained. “I had a pulsometer, so no matter what we did in training, I watched my pulse. When it got to 140 or higher, we stopped immediately, waited for it to go down to like 90 and then then continued. We did that for a month. So, I recovered and my body recovered and that made it possible for us to compete at Worlds without risking my health.”

The NHK Trophy champions were able to keep in shape following their training plan. The 140-pulse rate was just enough to set up and do an element.

“In the gym, I can run eight or nine kilometers per hour on the belt, which is quite fast, and the pulse is around 90 or maybe 105,” said Enbert. “When I do weight-lifting, the pulse is about 110, but when you go out on the ice, do a circle of crossovers, then it is already close to 130. Then I thought that figure skating probably is a hard sport, because after 15 seconds – doing a circle takes about 15 seconds – the pulse goes up to almost 140. Nevertheless, it allowed us to stay in shape.”

It was still not an easy time for the 2018 European bronze medalists as they didn’t know if Enbert would be declared fit to compete in time for Worlds. In fact, it was upsetting for both skaters as well as the whole national team.

“When we came back from the New Year’s holidays, and after some time had passed and we had hope that we could go to Worlds, we started doing something,” Zabiiako said. “Then we were told we had to wait longer and it was always like that—we started to get close into competition shape and then we were told to wait again.”

One week prior to the event, the skaters finally got the green flag before they left to Japan for a training camp. Enbert wants to make sure he does not run into similar problems next season.

“We’ll have some more rest in the off season,” he said. “We’ll have a little longer vacation than the usual two weeks. The main goal for the season is to recover.”

“The Olympic cycle is long,” Enbert pointed out. “When we teamed up, we did a sprint, because we had to start from zero as a new pair to get ready for the Olympic Games in Korea within three years. Each year, we tried to learn something new. We didn’t have the lifts, the twist or the throws ready [when we started]. We had to rush, and therefore, probably that led to the exhaustion. We practically didn’t have a break. We did all training camps to the maximum—we went to our limits. This now showed after the Olympic Games. Apparently the body can’t work like this all the time.”

Zabiiako and Enbert helped out at the ISU Pair Skating Seminar in Novogorsk as a demonstration team in early May before going on vacation. Now, they are working on an idea for their new short program.

“We are currently formulating the idea, then we’ll select the music for it and mount the program,” Enbert said.

In the meantime, the skaters are debating on keeping the long program for last year and will make their final decision in next month. As for the short program, they want to select the choreographer once they finalized their idea.

“First, we think of the idea and the character all together and then look for the choreographer,” Enbert explained. “Petia (Petr Tchernyshev) did a great short program for us and I don’t think anyone else could have done it that well, because he understood the idea and the character. Pasquale Camerlengo mounted a great free skating for us, because the lyrics were in French and he feels that. If let’s say Petia would have done the free and Pasquale would have done the long, it probably would not have worked out as well. Therefore, we’ll first formulate the idea and then maybe ask Petia or Pasquale or someone else.”

“We probably won’t have such a contrast as it was this year [between the two programs],” Zabiiako added. “The new short most likely is not going to be as powerful and martial as it was in the past season. However, we’ll try to have two contrasting programs.”

The World bronze medalists are thinking of keeping their successful long program to “Toi et Moi” by Russian composer Igor Krutoi for the upcoming season. 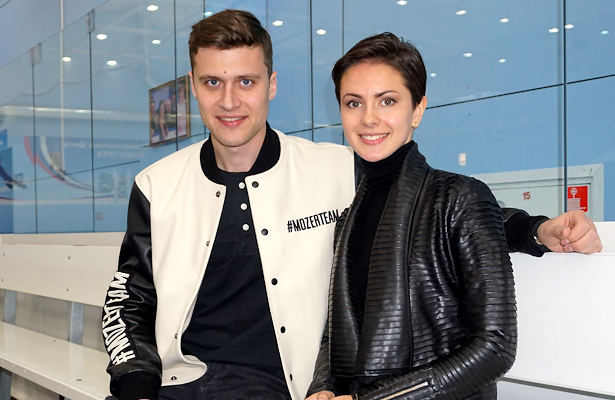 Off the ice, Zabiiako, 24, who always seemed a bit shy and reserved, changed her look a year ago when she began sporting a new short haircut. She then got engaged to Russian movie director Danil Grinkin, 23, last fall. She feels her fiancé has had a positive influence on her as she has begun writing and publishing poems on the internet and is interested in possibly writing a movie script.

“Natasha definitely has become more confident,” noted Enbert. “She basically was always confident and she knew what she was doing and what for, but still, she is shining more and you can see that in the performances and off the ice, which is great.”

Grinkin accompanied the skaters to the training camp in Fukuoka before the World Team Trophy and filmed a documentary on them, along with U.S. Champions Ashley Cain and Timothy LeDuc, who joined the camp.

“The most important topic is the life of people,” Zabiiako shared. “Everyone has the same goals and dreams, independently of your nationality, and the same problems. The sport unites us.”

The documentary should be released next winter or in early spring.

The skaters are gearing up for the 2019-20 ISU Grand Prix Series and want to become the number one pair in Russia.

“We felt this season that we’re if not better, we at least are not lagging behind,” Enbert said. “We can fight and we will fight for it and we’re confident in ourselves. We know we’re working with the best team and we have everything for it [to become number one]. Obviously, it’s sport and it depends on many factors, but we can do it and we’ll go for it.”

The World bronze medalists are not thinking about adding a quad throw or throw triple Axel to their repertoire as they feel the injury risk is too high. Three years ago, Zabiiako suffered a serious head injury when practicing the throw triple Axel. The skaters point out that they already have a competitive technical content with a throw triple flip and loop, plus side-by-side triple toes and Salchows. However, they are not ruling out the possibility of another side-by-side jump or a quad twist in the future.

“We’re trying to improve what we can do,” Enbert said. “There is still a lot to work on the death spiral, the lifts and the throws. We are confident about the [throw] flip and the jumps that we’re doing now, so we can go to the next step. However, I think for next year our content will stay very similar to the one we have.”

The Russian national silver medalists are looking forward to the upcoming season and are confident in their abilities to do well again.

“Everything is going step by step and as it needs to be, starting with the technique and beyond,” Enbert summarized. “It is a fun process that we enjoy. We’re going in the right direction and everything goes the way we want it. Our technique, programs, confidence, and expression is improving, and that is great. Everything is falling into place for us.”