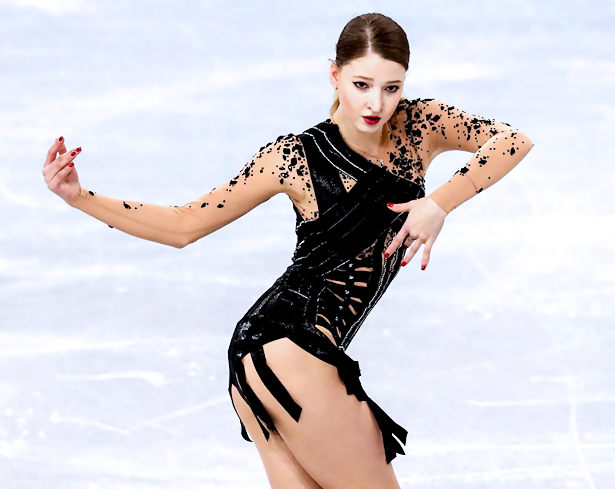 When Olympian Maria Sotskova hit a personal low at Russian Nationals last December, finishing 16th in a deep field of her compatriots, the skater naturally put her career in question. Now, however, the 19-year-old has quickly realized that she is not yet done with the sport and is preparing for the upcoming season with new coach Svetlana Sokolovskaia.

“After Russian Nationals, I returned home not knowing at all what to do in my life,” Sotskova recalled. “I took a rest. I recovered mentally, because it was hard (a difficult situation) and I started to train. I changed boots and skated in New Year ice shows, in Tchernyshev’s shows. I skated about two weeks in his shows and at this time I realized that I loved figure skating and I’m not ready just to skate in shows. I want to compete, I enjoy that. This is what I love and I’m not ready to retire now.”

The 2018 national silver medalist went to the Universiade in Krasnoyarsk, but again, like all season, struggled with some jumps and only finished seventh. Not a good result for her. She stopped training and focused on her studies at the renowned State Institute of Theatrical Arts in her hometown Moscow for about a week, but nevertheless, felt still drawn to the ice.

“I can’t give up and I don’t want to,” said Sotskova. “I love skating and I’m ready to skate. I just enjoy being on the ice and I think that I will regret it my whole life if I now just retire and give up everything. I’m still quite young and I still have time.” 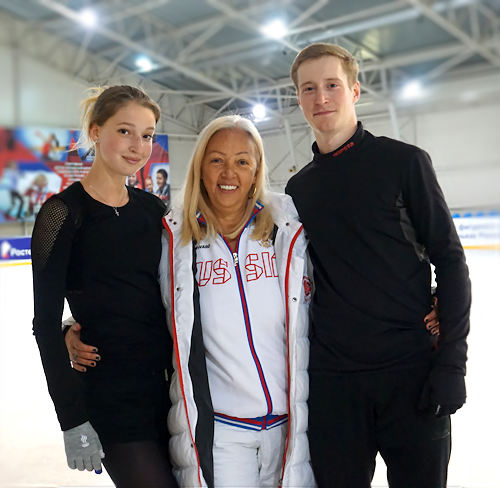 In early April, the 2017-18 ISU Grand Prix Final silver medalist decided to switch coaches and went from Elena Buianova, with whom she’s been training for three years, to Svetlana Sokolovskaia in the same club, CSKA Moscow.

“It just happened that way,” said Sotskova. “The work with my new coach is fruitful,” she said. The skater knew Sokolovskaia well as the two coaches have worked on the same ice up until the Olympic season. “She is not a new person for me and I didn’t have to get used to her. Overall, the work is going well. I just enjoy being on the ice, working, and this is enough for me.”

“It is not easy, but she has a huge desire to train and not the desire to leave the sport and this is obviously a task for me,” said coach Sokolovskaia. “The competition is huge now, but when the kid is not ready to retire at 19 years of age – and for me she is still a kid – then neither me nor anyone can dictate that to her.”

Sotskova settled on her two new programs before her vacation in May. Nikolai Morozov mounted her short program to “To Build A Home” in March.

“It happened spontaneously,” the Muscovite recalled. “Svetlana Vladimirovna [Sokolovskaia] went to the World Championships with Sasha [Alexander Samarin] and I went for a week to Novogorsk. I skated there in Nikolai Alexandrovitch’s [Morozov] group. I was just skating, was watching how they (his skaters) are skating, tried to change something and tried to take from him as much as possible as he is a great person and I loved working with him. One day he just came and said, ‘let’s do the short program.’ The process went very fast and basically, within one practice, we built the short program.”

The skater, who is studying to become a choreographer, was impressed by Morozov’s skills and has a lot of praise for him.

“He is incredibly creative. He just needs a second and will think of a step sequence and you’re standing there and think ‘Oh, how can I repeat that now?'” Sotskova explained. “He creates moves very easily. He doesn’t have to sit there and think of something, listen to the music and think how to arrange everything. He and the music are just like one and he is thinking of [choreographic] combinations right on the spot and he has like a billion of these combinations. I tried to remember as much as I can so that I can use it in the future. For me it was like a good internship and I really liked it.”

Nikita Mikhailov then choreographed the new long program to the soundtrack of Fifty Shades of Grey. This music was Sotskova’s choice.

“When the movie came out, a lot of people took it right away, but now it’s been a while since someone skated to it and the music there is indeed great,” she said. “I suggested it, we listened to it and started to build a program. This year, the process of mounting programs was very easy for me. Apparently, my studies at the Institute helped me, because I was involved in the process, I suggested something myself and tried to think of something.”

The 2016 World Junior silver medalist is not making specific plans for the season yet. “We’re just training and working and then we’ll see what happens,” she said. Sotskova knows it will be tough to even make the top ten at nationals. Even qualifying for nationals won’t be an easy task if she doesn’t compete at the Grand Prix and get a bye.

“Now we started training and it’s hard, but her desire to work impresses me,” Sokolovskaia said about her student. “Whatever will happen, I know for sure that I have no regrets [taking her as a student]. She is a very pure and well educated person.”

The skater knows how tough the competition is, but she now has a different perspective. “I’m in a stadium that I try to enjoy each moment,” Sotskova explained. “When you realize that your career is hanging by a silk thread and can end very soon, then you start to look at things in a different way and you probably try to enjoy it more. Before, it seemed like it was never going to end, it will be always like that, you’re somewhere at the top and it will be always like that. When you’re falling down, then you start to appreciate everything more.”

Indeed, Sotskova rarely finished off the podium until the post-Olympic season or was at least close. She collected six consecutive medals at nationals – four at Junior Nationals and then two at the senior level until 2018. She also earned a total of five medals on the ISU Grand Prix series in 2016 and 2017, including silver at the Final in 2017. On top of that she won two Challenger Series events. In her two appearances at the ISU European Figure Skating Championships the Russian placed fourth and at two World Figure Skating Championships and the Olympic Games she came in eighth.

“I think if I had retired in that period when everything was bad, then it is like giving in to a weakness, because the circumstances are stronger than you and I don’t want that,” she pointed out. “I want to compete; I like to go out on to the ice at competitions and feel the energy of the audience.”

Nevertheless, Sotskova is thinking of her future and took up studies at the famous Institute of Theatrical Arts and just finished her first year of studies. The term exams started when she had to go with her group to a training camp in Italy at the end of May. She was able to pass two exams before leaving and will have to complete the rest in September.

Sotskova, who is the only athlete in her class (along with ballet dancers from various companies), feels lucky that her school is very supportive. “I’m endlessly grateful to these people that are around me, if in school or at the Institute, they always helped me, supported me,” the athlete said. “I wouldn’t be able to study if they put obstacles in my path in the Institute. It is already hard to study there and if they didn’t help me, it would be impossible. They are all very friendly and try to help. One classmate always sends me lessons. Everything that I ask for and what I miss, they help me [to catch up].”

Sotskova feels happy to be able to combine both of her passions – skating and studying – and is looking forward to the future, determined to make the best out of it while enjoying each moment.