The post-Olympic season was a tough one for Russia’s Dmitri Aliev, who finished seventh at the games in PyeongChang in the men’s figure skating discipline. Coming off a high with a silver at the 2018 Europeans and a seventh-place finish at the 2018 World Championships, the young Russian skater struggled last season. In December, he ranked fifth at 2019 Russian Nationals, thus did not make the team for Europeans. He then faded to ninth in the Russian Cup Final in Novgorod last February, where he wanted to fight for a spot on the World team. In Novgorod, it was dismal to watch such a talented skater fall apart, who appeared both disappointed and exhausted.

Bottomline, he needed a break. After the Russian Cup Final, his last competition of the season, it was hard for him mentally. In fact, the skater did not even want to think about skating.

“I worked hard in practice, but I didn’t have enough strength to prepare mentally for the (post-Olympic) season,” recalled the skater who turned 20 in June. “I really would have needed one month or one and a half months off to get myself into order and to start with a fresh mind. The whole season was a continuous fight in my head. Everything comes from the head. I did not find a solution. The coaches were always with me, but every time I went out to compete, something in my head killed me and I was not myself.”

Coach Evgeni Rukavitsin feels that different factors led to the struggles in the past season. He felt that Aliev had left everything on the table during the Olympic season.

“It was his desire to get to the Olympics without compromise,” said Rukavitsin. “When all this happened, the success at the Europeans and the qualification for the Olympics, after all that happened what he had wished for so much, he exhaled so much that he couldn’t breathe out anymore and he loosened up.”

“Moreover, when we went to the first competition, Lombardia Trophy, he skated very well there and I think this was a moment that made him relax inside — that it now always will be like that,” the coach added. “Then, there was the first, the second failure, apparently, there were doubts and all this probably had an impact on that unsuccessful season. Now the picture is entirely different.”

Aliev started the preparations for the upcoming season at various training camps. First, he went with coaches and choreographers Rukavitsin, Olga Glinka and Valentin Molotov, as well the other skaters of his training group, to Fondo, Italy and then to Kislovodsk, Russia, to train in the mountains. After that, the group was in Jelgava, Latvia, for their traditional summer camp.

In Italy and in Latvia, the team built the new 2019-20 programs to “Je dors sur les roses” from Mozart, l’opéra rock for the Short Program and “Sound of Silence” performed by Disturbed for the Free Skate. However, it was not a quick decision, especially for the long program.

“The goal was to start mounting the programs in Fondo,” explained Aliev. “We took some decision regarding the programs, but eventually there were many nuances. We picked music and then we changed it. We had tried to do something in a different, more dance style, but unfortunately it didn’t really work. I didn’t really feel it. It was faster, more dancey, and we wanted to add a slow part in the middle and we did not find a suitable composition. So, this program didn’t work out. The time was passing and we had to find new music and I started to panic, because we were running late.”

Together with choreographer Olga Glinka, the skater listened to a lot of music and eventually decided upon “Sound of Silence.”

“I really like slow, lyrical music,” said Aliev. “This works well for me. I can show my skating and the program and the character very well. It is a really good piece of music, strong, and a little bit different from my style I used to have. Here, there is such a serious male voice and the theme of the melody is nice. At the last camp in Latvia, we choreographed it. We still have to work a little on the arm movements, but we’ll always continue to polish it.”

The Short Program was a mutual decision as Aliev enjoyed the musical. He had actually watched the Mozart, l’opéra rock on Youtube numerous times.

“This song plays when he (Mozart) hits the bottom and it is about roses,” the national bronze medalist elaborated. “The theme, the spirit, suits me. There is pain and an eruption (of emotions), and in the end, there is this strong part where you can give it your all in the step sequence and I think it will look very good.” 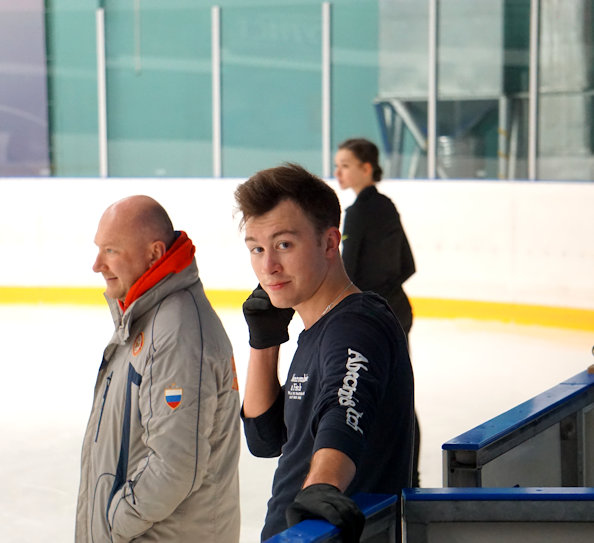 In Latvia, Aliev started doing complete run-throughs of his programs and performed them at the end of the camp in public for the first time.

“In Latvia we worked full force,” he said. “We started doing run-throughs of the program rather quickly. At first, we skated without jumps and then we skated full programs, the whole long program and the short. At the end of the camp, we had a test skate where we skated one by one. It was interesting. The main work was on the programs and breaking in the programs.”

The 2017 World Junior silver medalist plans to include the quad Lutz and quad toe in his programs. He landed them in practice when Golden Skate visited a session in the second half of July in St. Petersburg.

Coach Rukavitsin is feeling optimistic about the upcoming season.

“First of all, I see the light in his eyes and the desire,” he observed. “This kind of desire that I saw in the Olympic season. Therefore, I really hope that we’ll overcome that black streak or rather have overcome it already.”

Aliev will take part in the test skates in Moscow September 7 and 8 and then plans to go to Lombardia Trophy in Bergamo, Italy, for his first competition. He has been selected for the Grand Prix events Skate America and Rostelecom Cup.

“I was surprised at first,” the 20-year-old admitted regarding his Grand Prix assignment. “I didn’t think they’d give me America. In general, I am happy that I am going to two Grand Prix. I am happy about any of them, it is not important if it is Canada, Russia or France. I got the honor to represent my country at Skate America and Rostelecom and I will prepare for it.”

Like many skaters, the 2018 European silver medalist prefers performing on home ice.

“In Russia there is always a good support,” Aliev pointed out. “I am probably on the positive side and I think it helps me. At Rostelecom and at European Championships we were at that rink, Megasport, and everything was successful for me. Hopefully, this time it will also go well.”

Off the ice, Aliev is studying in a college specialized on athletes and plans to continue his studies at the Lesgaft University for a coaching diploma. Being a huge dog lover, he was excited that his mom came to visit him and bring him his little dog, Mars, a spitz. While the skater was away at the training camps, the dog stayed with his parents in their hometown in Ukhta, in the far north of Russia.

“I’ll be at home not alone,” said Aliev. “I will have my little companion. It is very nice when I have a dog at home. It takes away the negative things and makes me feel comfortable and cozy at home.”