Russia’s Petr Gumennik turned heads in this past season when he won his two Junior Grand Prix events and then took silver in the Final. However, at his debut at the ISU World Junior Figure Skating Championships last March, the then 16-year-old from St. Petersburg did not skate his best in the long program and placed tenth. Nevertheless, the young skater has learned some important lessons and is now eager to start the season at his first Junior Grand Prix event in Chelyabinsk, Russia.

Gumennik, who is coached by Veronika Daineko and Alexander Ustinov, is pleased overall with how the past season went for him and felt like he had a “breakthrough.”

“At international competitions, I presented myself well,” said the teenager. “I did well in the (Junior) Grand Prix and in the Final, too. Of course, there were also some failures, but I think it is very rare that all competitions in the season go well. So that didn’t ruin the overall impression of the season. I finished it at a high note at a national event (the all-Russian Spartaciade).”

Gumennik and his coach analyzed what went wrong at Junior Worlds and the skater feels like he “tried too hard.”

“I was nervous,” he confessed. “In practice in Croatia, Zagreb, everything went very well and because of that I got even more nervous. That happens often to athletes. When it goes very well in practice, in competition something might not work out and vice versa, because instead of doing like in training, you want to do even more. This is what affected me.”

His coach agreed adding that while he was ready, there were some “psychological moments.”

“We discussed this in our team with the athlete, settled it, drew conclusions and did the right thing,” Daineko offered. “Partially, he didn’t have enough experience and I was lacking experience as well.”

Following Junior Worlds, Gumennik landed two quad Salchows at the Spartaciade, his last competition of the season. In preparation for the season that starts this week with the first Junior Grand Prix in Courchevel, France, the Russian went to a training camp in Krainevo, Bulgaria. However, he worked mainly at his home rink in St. Petersburg, the club of legendary coach Tamara Moskvina.

“I started to skate my program with two quad Salchows and to work on the quad flip and toe,” explained the Russian junior silver medalist. “We’ve worked a lot on the skating skills to have more speed, because I was lacking that last season.”

The skater, who missed senior Nationals this past season due to bronchitis, feels like he is getting close to the quad flip and toe.

“Usually I start doing new jumps at the beginning of the season, in September,” said Gumennik. “Last year, I did the Salchow, the year before that I started landing a good (triple) Axel. I hope it will be the same this year.”

However, he probably won’t go for the new quads right away.

“Even if I land the quad toeloop and flip (in practice), it will be hard to do them all together ⁠— also with the triple Axels and the whole program. I need time to break that in,” he said.

Gumennik has two new programs, both of which are choreographed by Nikita Mikhailov. The Short Program is set to “Je me souviens de nous” by Maxime Rodriguez from the album “Symphonie sur glace,” while the Free Skate is to “The Phantom of the Opera”. The skater chose the music together with Mikhailov and his coaches Daineko and Ustinov. He also worked with Tatiana Tarasova and Nikolai Morozov recently on his long program to refine it while in Novogorsk.

“I really like them,” said the Junior Grand Prix silver medalist of his routine. “I can express myself in them and present myself. The short is not so much my character actually, but I’m already getting into it. It is more serious ⁠— you have to perform all movements in a very exact manner. We did the free at the end of the season and it is more broken in. Nikita suggested this music and we all liked it.”

The skater, who enjoys reading, music, skateboarding and cycling, is eager to start the season. His goal is to win his two Junior Grand Prix events, qualify and make the podium at the Junior Grand Prix Final, and skate well at Junior Worlds.

“I want to make a personal achievement,” he added. “Not to beat someone, but to skate my programs with three quads for example, to be better than last season. I also want to skate at senior competitions, at Russian Nationals and at international senior B events.”

Daineko, on the other hand, has some specific placements on her mind: “The goal is set⁠—to make the top six at Nationals, fix the mistakes from Junior Worlds and get into the top three (at Junior Worlds). This is what we planned last season and it didn’t work out.” 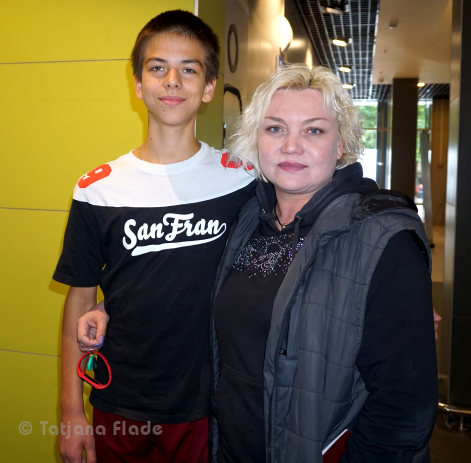 Gumennik is Daineko’s most successful student thus far. “He can pull himself together and can analyze his actions, and therefore, he probably is more consistent than my other athletes,” she noted. “Self-control is a very important character trait that makes it possible to become a high-class athlete.”

“He is now changing from a boy to a young man and therefore different character traits are coming up,” she pointed out. “He apparently is now testing himself and feels stronger and tries to be independent. He can be open, but he can also not talk. He can be hard-working and he can be terribly lazy. He is a smart boy, this is not his character, but a natural gift. Sometimes he behaves well towards the coach and sometimes not so well. He is a youth, that is his whole character.”

The now 17-year-old sees his strength in being a complete skater.

“There are athletes that are better than me in jumps, in spins, in skating skills, but I think I am able to combine all that and to perform consistently in competition,” he pointed out, adding that he feels he needs to catch up technically. “In particular, as for the jumps, I’d like to learn harder jumps and get more speed in skating and in the spins, become more powerful.”

Gumennik’s parents – his mother is a neurologist and his father is an Orthodox priest–let their oldest of three sons try different sports such as swimming and wrestling, but he didn’t like anything until they put him into figure skating. He was immediately hooked.

“I felt right away that this is something I want to dedicate my life to, something that I want to do,” said the skater. “I liked it from the very first lesson.”

“I like to train and to improve, to overcome myself, to progress,” he summed up. “I like to perform, to show what I’ve worked on to the spectators and to get rewarded for good work.”

Gumennik was seven years old when he joined Mishin’s school. Two years ago, he decided to move to Moskvina’s club. Daineko used to work in Mishin’s school as well, but later switched to the new club. The athlete loves jumps, but also just to skate. When he was younger, he looked up to Evgeni Plushenko whom he trained with when he was coached by Alexei Mishin in the past. He also admires Patrick Chan for his skating skills and now is inspired by Nathan Chen.

The 2019 Skate Helena champion is the only athlete in his family. His younger brother Ivan,11, tried skating for a while, but gave it up, while is little brother, Nikolai, 6, does acrobatics for fun.

Gumennik is not only ambitious on the ice, but also takes school seriously. He attends classes on his day off and studies in the evenings with a tutor. He is now entering the 11th grade and his favorite subjects are mathematics, chemistry, biology and geography.

“After school, I probably will attend medical school,” he revealed. “My mom is a doctor and I am also interested in that. I think I’d like to become a surgeon.”

The figure skater is scheduled to open his season at the ISU Junior Grand Prix in Chelyabinsk, Russia, September 11 to 14, 2019.