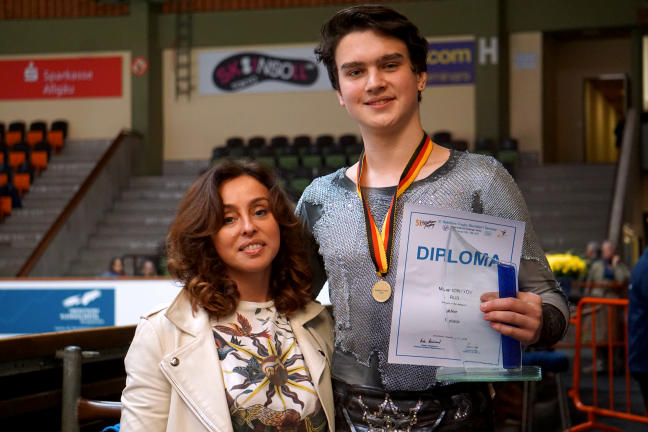 Makar Ignatov of Russia took many by surprise when he won the prestigious Nebelhorn Trophy ISU Challenger Series event in Oberstdorf, Germany, at the end of September. “My name is Makar Ignatov and I am from St. Petersburg,” responded the skater with a wide grin to the questioning journalists.

The 19-year-old had some success on the junior scene and was an ISU Junior Grand Prix Finalist during the 2017-18 Olympic season, finishing fourth. He seemed to be on his way up, but then injury struck later that summer during a training camp in Latvia.

“It was unfortunate what happened. It was at the end of the training camp, I was in good shape already and I had prepared for the new season,” Ignatov recalled. “I landed on a jump and felt a sharp pain in my foot.”

An initial X-ray in Latvia did not reveal anything, but the pain did not go away. Back in St. Petersburg an ultrasonic testing confirmed that the skater had broken a bone in his right foot. He was in a cast for two and a half months. He did not fully recover until January 2019.

“It was an upsetting story with Makar,” said coach Evgeni Rukavitsi. “He lost almost the whole season. He only recovered for the Russia Cup Final in February. He skated well there, and thanks to that, he got onto the reserve team. Right after that, he also skated very well at a local event in St. Petersburg, with two quads in both programs, triple Axels and triple-triple combinations. I think he can show himself very well this season.”

His student proved him right in Oberstdorf at Nebelhorn Trophy, although the Short Program didn’t go too well with a fall on an underrotated quad Salchow and a tripled quad toe in the combination. Ignatov stood in seventh place, but then delivered a strong Free Skate with two clean quads and moved up to take his first victory in an international competition.

“The short program was bad,” admitted Ignatov. “I didn’t expect that it would go this way as I was ready technically with my jumps and everything. It just didn’t come together. I am happy that I was able to pull myself together and to show in in the free skating, at least jump-wise, what I am capable of and what I do in practice every day. Nevertheless, there is still a lot left to work on. The components and the spins could be better and my physical shape as well. I was tired at the end of the program.”

Ignatov had already had left a good impression at the test skates in early September and was nominated for the ISU Grand Prix Rostelecom Cup in November. However, following the test skates, he again had problems with his foot and missed some training. As a result, his preparation for Nebelhorn Trophy, his first international event since competing at Tallinn Trophy almost a year ago, was cut short.

“Even though I did not have a lot of time to prepare, I was still able to show quite a good level of skating in the long program for myself at this time,” the 2017 Riga Cup silver medalist noted.
Despite his young age, Ignatov has had his share of injuries. Prior to the broken foot, he missed two seasons in his early teens as battled problems with his knees, however, he never thought about quitting.

“I just like to jump,” he shared with a laugh. “It is this whole process—the entry into the jump, especially when the take-off is good, the rotation in the air, the landing. When you do a jump well and it comes easy to you, you enjoy it a lot.”

“I was on skates since I was four years old and I’m living this sport every day,” he continued, adding that he had begged his parents for months to let him skate after he first went to an ice rink during holiday. “It is hard without it. When I was in a cast, I went straight to off-ice training. It is hard for me without figure skating.”

Ignatov enjoys competing and says finds competitions motivating. He feels it’s a change of scenery due to the traveling as well as experiencing new things.

“You realize that thanks to figure skating, you can get everywhere, and when you skate well, it is even nicer,” he noted.

For this season, the 2017 Croatia Cup bronze medalist is skating to “In This Shirt” by The Irrepressibles for the Short Program and is keeping last season’s Free Skate to “Remember Me” from the Troy soundtrack.

Ignatov found the Short Program music himself, recalling that he had heard it for the first time at a movie The Forgotten Circus during a dramatic scene. He suggested it to choreographers Valentin Molotov and Olga Germanovna Glinka, and they mounted it together.

Along with his team, the skater decided to keep the long program as he didn’t compete much during last season. This music was a suggestion by choreographer Olga Glinka and the skater liked it.

Ignatov is now scheduled to compete at the Denis Ten Memorial Trophy in Kazakhstan and at Minsk Ice Star in Belarus before his Grand Prix debut in Moscow. The skater is looking very much looking forward to this event.

“It means a lot to me,” he said of Rostelecom Cup. “I want to skate well and present myself well. In a way, this is a new level for me and I want to hold up so that it is not my first and my last Grand Prix.”

This season, the 19-year-old, who also enjoys soccer and reading, is setting the obvious goals of skating clean programs while pointing out that he isn’t trying to qualify for any particular event.

“Everything depends on how I am skating,” he said. “If I skate clean, maybe I’ll get somewhere or maybe I won’t. So the job is to skate clean programs,” he said.

“Maybe I’ll add another (quad) toe or Salchow,” he summed up. “In practice, I’m doing all quads, but that is not interesting, because this is just in practice. When you do it in competition, then you can talk about it.”