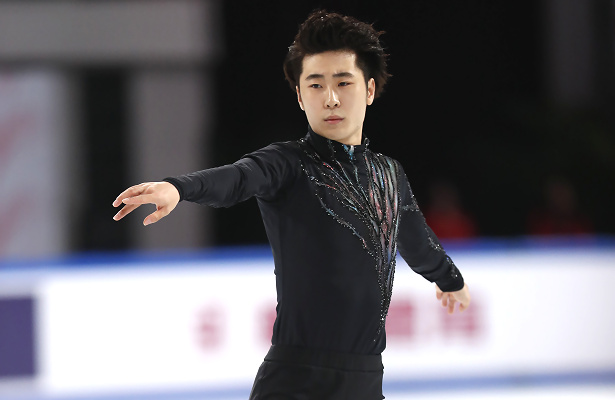 Boyang Jin of China performs his Free Skate at 2019 Cup of China.

Jin nailed his routine to “First Light,” which featured a quad Lutz and quad toe-double toe right out the gate. The 2019 Four Continents silver medalist doubled a toe that was meant to be a solo quad, but otherwise landed a triple Axel-Euler-triple Salchow and triple Lutz-triple toe. The 22-year-old also earned a level 4 on all spins to earn 176.10 for first in the free skate and overall (261.53).

“My performance was OK, but still not as good as I have been training,” said the five-time Chinese national champion. “Last year, there was no Cup of China and I am very happy that the event came back. The main color of the rink is red, like the spicy color of Chongqing, and that motivated me a lot.”

Han, who took a break from skating after shoulder surgery in 2017, landed a solid triple Axel-triple toe that earned high positive grades of execution (GOE) across the board in his routine to La La Land. The 23-year-old went on to land a strong triple Lutz, but received an edge call on both triple flips. In all, he landed six clean triples and showed good spins and level 4 footwork to finish second (162.99) in the free skate and overall (249.45).

“I want to thank the Chinese team that they gave me the chance to come back,” said the two-time Olympian. “My performance was normal, but I didn’t have the highest degree of difficulty. I am a bit surprised that I can be on the podium with triple jumps. I came here like a rookie skater.”

Rizzo finished fourth in the free skate (160.16), but managed to maintain third overall with a total of 241.88 points. The 2019 European bronze medalist landed a quad toe and triple Axel-triple toe, but fell on an underrotated triple Axel and received an edge call on both triple Lutzes. His footwork was graded a level 4 and was awarded many positive GOEs.

“It was like yesterday,” explained the 21-year-old. “I had a good start and then a huge mistake in the second half of the program. I need to go home and practice a lot the second part of my short and free programs.”

Skating to “November Rain”  by Guns N’Roses, Keegan Messing of Canada landed a triple Lutz, quad toe, and triple Axel-double toe. However, the 2019 Autumn Classic bronze medalist put a hand down and turned out the landing of a quad toe (in combination with a double toe) and later fell on an underrotated triple Axel. The 27-year-old finished third in the free skate (160.56) and rose from fifth to fourth overall (237.36).

Japan’s Keiji Tanaka landed a quad Salchow-double toe, triple Axel-triple toe, and four more clean jumps in his routine to selections from Sherlock Holmes. However, the 2019 Skate Canada bronze medalist underrotated a quad toe and popped an Axel to finish in the free skate (158.98). He moved up two spots to fifth overall (233.62).