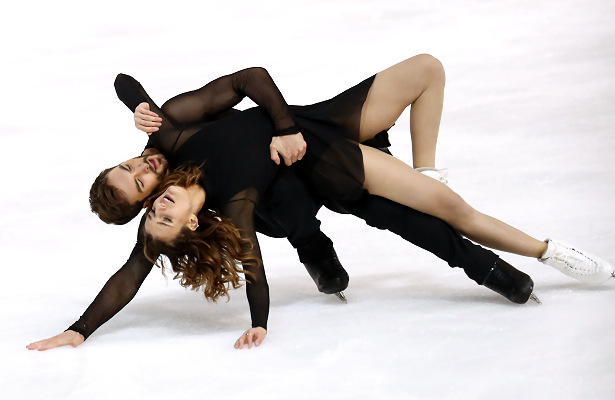 France’s Gabriella Papadakis and Guillaume Cizeron easily defended their title with 18 points to spare at this event on Saturday afternoon, earning their fourth consecutive gold at a Grand Prix event in France. Maintaining second and third respectively, USA’s Madison Chock and Evan Bates won the silver, while Italy’s Charlene Guignard and Marco Fabbri pocketed the bronze.

Telling a story with seamless transitions, Papadakis and Cizeron showed solid level 4 twizzles, lifts and spin. Their circular steps were graded a level 3 while she received a level 2 and he a level 3 on the one-foot steps. The 2018 Olympic silver medalists racked up many +4 and +5 positive grades of execution (GOE) in all elements in their innovative performance to music by Olafur Arnalds and Forest Blakk, placing first in the Free Dance (133.55) and overall (222.24).

“We are very lucky to be competing in France for our first international competition, because we are at home,” said Papadakis. “It was a really great competition. We’re looking forward to Japan (the NHK Trophy in Sapporo later this month) and to work on all the things that didn’t quite go the way we wanted, and to make it even better there.”

“This program is a little bit about death, but not in a really tragic way,” said Cizeron. “It’s about two connected souls that want to find each other after life, after whatever they are going through. I think in this way it connects to everyone.”

Chock and Bates were smooth in their engaging Egyptian Snake dance routine which featured level 4 lifts, spin and twizzles. She earned a level 2 on the one-foot steps, while he a level 3, but the circular steps were graded a level 2. Like the French, the 2019 Four Continents Champions earned many positive GOEs and finished second in the free dance (124.15) and overall (204.84).

“We skated really well both short and free, and we are very pleased with the way the programs kind of open up and carry more speed throughout,” said Bates. “I think doing two Challengers really was beneficial for us. Now we go to China on Monday for the Cup of China, so not much time to make any changes. The programs are in a good place and we’ll just build off the good skates this weekend and hopefully continue to improve.”

“Since Finland, we’ve been working on improving our program,” added Chock. “We want it to grow to it’s full potential.”

Guignard and Fabbri put out the second most technically difficult free dance, earning a level four on all elements, including the diagonal and one-foot steps. The 2019 European bronze medalists earned 123.69—a new personal best—for their routine to David Bowie’s “Space Oddity” and  “Life on Mars?,” and 203.34 overall, also a personal best.

“For the first time in my life, I have to say that I’m super proud of what we did,” said Fabbri, who injured tendons in his right hand in a practice accident in September. “We didn’t think we would have been here until one week ago. We couldn’t expect more from this competition.”

He expects to start to use his right hand again slowly within the next 10 days.

“There are obviously some things that need to be improved and some things that will be changed when I’ll be able to use my right hand again,” he said. “We didn’t think we could adjust every single element, but we were finding ways to make these adjustments. We didn’t have time to make the program a full package.”

Spain’s Olivia Smart and Adrian Diaz finished fourth in the Free Dance (112.09) and overall (188.18) after their performance to music from Micmacs à tire-larigot. Their routine featured level 4 lifts, twizzles and dance spin, however, they received a one-point deduction for a fall on the choreographic slide.

Russia’s Tiffani Zagorski and Jonathan Guerreiro also took a fall on their slide, but otherwise earned a level 4 on all elements with the exception of his one-step footwork which was graded a level 3. The 2018-19 Grand Prix finalists finished fifth in the Free Dance (109.39) and overall (184.44 – personal best).