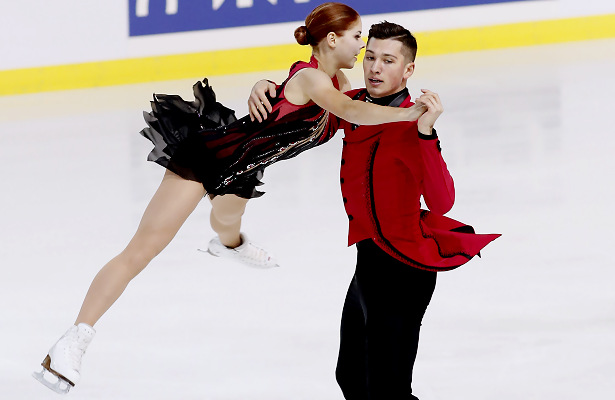 Grand Prix debutants Anastasia Mishina and Aleksandr Galliamov of Russia edged out teammates Daria Pavliuchenko and Denis Khodykin for the title in Grenoble at the 2019 Internationaux de France on Saturday night, while USA’s USA’s Haven Denney and Brandon Frazier maintained third to pocket the bronze.

Mishina and Galliamov gave a powerful routine to music from The Master and Margarita which featured a triple twist, throw triple Lutz and triple loop and side-by-side triple toes. The only error came when she doubled her jump on the side-by-side triple Salchows. The 2019 World Junior Champions also earned a level 4 on their group 5 reverse lift as well as their pair change combination spin, finishing first in the Free Skate with 133.81 points. With a total score of 207.58, the team moved up to first overall.

“Today our program was not very clean,” admitted Mishina. “I made a big mistake on the jump (Salchow), but maybe it is good that it happened now. We will work on this and in our next competition we won’t make this mistake.”

“We didn’t think about medals, but we were nervous of course as this is our first Grand Prix and maybe that’s why we made some mistakes,” added Galliamov. “Our next Grand Prix maybe will be a bit easier mentally.”

Skating to music from Tron Legacy, Pavliuchenko and Khodykin landed a level 4 triple twist, side-by-side triple toe-double toe-double toes, and a throw triple flip and triple loop. Although Pavliuchenko fell on a triple flip as well as throw triple loop, the 2018 World Junior Champions were otherwise solid. The lifts and spin were graded a level 4, and they earned a new personal best of 129.97, finishing third in the Free Skate. With a total score of 206.56, however, the overnight leaders slipped to second overall by just over a point.

“Our performance tonight was not the best one, unfortunately,” said Pavliuchenko. “I made two major mistakes, but we are still pleased with the result and will continue to work.”

“When we went to our Grand Prix events, it was our plan to qualify for the Final and it looks like we did it,” Khodykin added. “We want to be in top shape for the Final.”

Denney and Frazier finished second in the Free Skate with a new personal best of 130.75 and maintained third overall (199.40, also a personal best). The 2019 Skate America bronze medalists showed a triple twist, side-by-side triple Salchows, and level 4 lifts. However, Denny put a hand down on the throw triple loop and stumbled and underrotated the side-by-side double Axel combination in their routine to music from Lion King Returns by Hans Zimmer.

“Haven and I are happy with the fight we brought today,” said Frazier. “We left some points on the table with the jump and a couple of other things, but all in all, we’re happy to come here with the quick turnaround from Skate America and to be able to keep progressing the way we are this season. We keep growing from here.”

Teammates Ashley Cain-Gribble and Timothy LeDuc earned the second highest program component score of the group, placing fourth(129.66) in the Free Skate and overall (195.78) in their routine to “The Middle of the World” and “Experience”. The U.S. Champions produced a triple twist, throw triple Lutz and triple Salchow, and side-by-side triple loops. The one glaring mistake came when she fell on the side-by-side triple Salchow combination.

Miriam Ziegler and Severin Kiefer of Austria moved up to fifth overall (181.26), followed by Canada’s Camille Ruest and Andrew Wolfe (166.15).