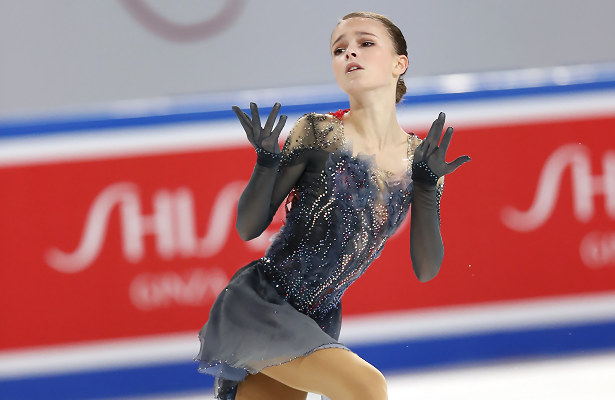 Coming off a win in her Grand Prix debut at Skate America, Russia’s Anna Shcherbakova took the lead in the Ladies’ Short Program on Friday at the Huaxi Culture and Sports Center in Chongqing. Japan’s Satoko Miyahara is currently in second with USA’s Amber Glenn close on her heels.

Performing to selections from The Perfume, Shcherbakova landed an easy double Axel followed by a triple flip and triple Lutz-triple loop. Although the Lutz received an edge call, the 2019 World Junior silver medalist was otherwise solid, showing strong level 3 footwork and level 4 spins throughout. She earned a new personal best of 73.51.

“It was better (than at Skate America), because I did all elements clean,” said the 15-year-old. “After Skate America, we worked a lot on the short program, on the jumps and step sequence. But my main goal is the free skating tomorrow.”

Miyahara opened her Egyptian Disco routine with a triple Lutz-triple toe, but the last jump was underrotated as was a triple loop later in the program. The 2019 U.S. International Classic champion otherwise landed a solid double Axel and showed level 4 spins throughout, earning a score of 68.91.

“I wanted to challenge a new style and it is still a tough program for me,” said the 21-year-old of her new short program. “I need to work on the step sequence and the last part of the program, but the dancing part is really fun for me.”

Skating to “Scars” by Madilyn Bailey, Glenn landed a solid triple flip-triple toe, double Axel, and triple loop. The 2019 U.S. Classic bronze medalist also earned a level 4 on her footwork and all spins to score a new personal best of 67.69.

“I felt I had a pretty good skate considering I found out five days before I was leaving I was coming here,” said the 20-year-old. “I had a great time, I felt really good out there. It’s a great opportunity.”

Russia’s Elizaveta Tuktamysheva fell on her opening triple Axel, but was otherwise solid in her routine to “Drumming Song” by Florence and the Machine. The 2019 Skate America bronze medalist produced a triple flip-double toe and triple Lutz to score 65.57 for fourth place.

Teammate Sofia Samodurova underrotated the backend of a triple flip-triple toe, but landed a triple loop and double Axel. The 2019 European Champion sits in fifth (63.99).