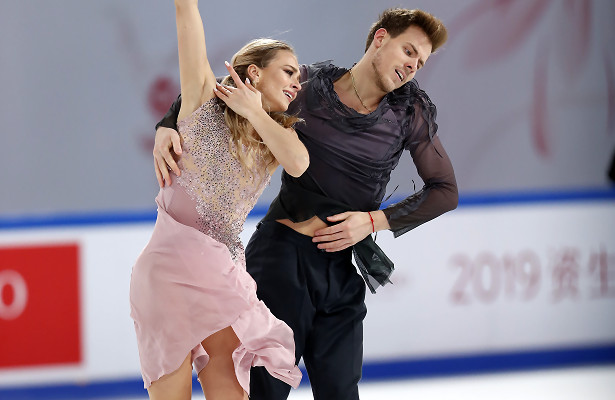 Victoria Sinitsina and Nikita Katsalapov of Russia perform their Free Dance at 2019 Cup of China.

Russia’s Victoria Sinitsina and Nikita Katsalapov claimed their first Grand Prix title at 2019 Cup of China on Saturday afternoon in Chongqing in the Ice Dance event. USA’s Madison Chock and Evan Bates maintained second to take their third silver medal at this event, while Laurence Fournier-Beaudry and Nikolaj Soerensen of Canada pocketed the bronze.

Sinitsina and Katsalapov were docked a point a for an extended curve lift, but were strong and flowing in their routine to “I Giorni” and “Songs My Mother Taught Me”. The 2019 World silver medalists both earned a level 4 on their twizzles with many positive grades of execution (GOE), as well as all lifts and the combination spin. She received a level 3 on the one-foot steps, while he a 4, and the serpentine steps were graded a level 3.  In the end, they finished second in the Free Dance with 124.51, and with a total score of 209.90, the overnight leaders were able to maintain first overall for the gold.

“We are not pleased with our performance today,” said Katsalapov. “Not everything worked out. It was hard, but we fought to the end and were together. We hope that next week (at Rostelecom Cup) we’ll put out the kind of performance that we’ve been training.”

Chock and Bates won the free dance with by nearly four points with 128.21. The 2019 Internationaux de France silver medalists received many +4 and +5 GOE for most elements, including level 4 lifts, spin, and twizzles. Both skaters were graded a level 3 on the one-foot steps and the circular steps were also a level 3 in their engaging “Egyptian Snake Dance” routine. With a total score of 208.55—a new personal best, the 2019 U.S. silver medalists finished second overall.

“We skated really well today and we’re super happy with how things went,” said Bates. “We feel like we’re growing and building on each performance.”

Chock agreed, adding: “I actually found that back-to-back Grand Prix were beneficial. It’s easy to stay in competition mode. You really stay focused and in the right head space.”

“I think our performance today is a testimony to our training,” said Soerensen. “I injured my (right) knee last week and had to spend the week off the ice. We’re really happy we ended up in third place with good skates.”

In their fifth appearance at this event, Wang Shiyue and Liu Xinyu of China finished fourth in the Free Dance (111.68) and overall (186.45)—both a personal best—after their expressive routine to selections from Black Swan which featured level 4 lifts and spin. The twizzles were graded a level 4 for her and a level 3 for him.