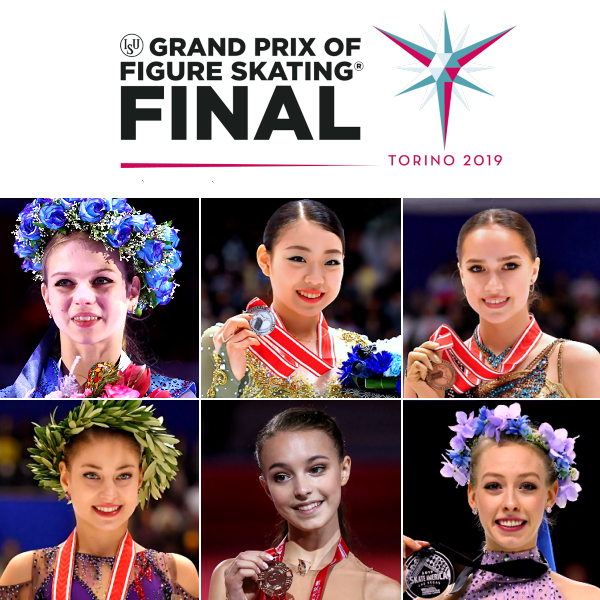 The young Russian “A-squad” took over in the 2019-20 ISU Grand Prix of Figure Skating series in the fall as many predicted: Alena Kostornaia, Alexandra Trusova and Anna Shcherbakova, all from Eteri Tutberidze’s school in Moscow, won their two events and top the standings heading into the Final in Torino, Italy, December 5 to 8. The A-squad advance party, Alina Zagitova, made it, as well as two non-Russian skaters, Japan’s Rika Kihira and USA’s Bradie Tennell.

What’s going to happen in Torino? Most likely a crystal ball is not needed to predict this; a Russian is bound to win, but which one?

The two-time World Junior Champion became the “quad queen”—who could easily compete with the “quad kings”—which is something she’d love to do. This fearless competitor has been going for four quads in her programs in the Grand Prix series: Lutz, two toeloops and Salchow. She only missed the Salchow, but nevertheless, accumulated a higher element score than most of the men. At Skate Canada, only Yuzuru Hanyu had more than she, and at Rostelecom Cup, men’s champion Alexander Samarin had ten points less for technique.

Recently, video clips with Trusova landing a triple Axel in practice have been popping up. That’s great for the 15-year-old and bad news for her competitors, who could hope to get some point advantage over her in the short program. Knowing Trusova, it won’t be long before she’ll be able to include the new jump into her programs.

The 2018-19 ISU Junior Grand Prix Final silver medalist has also been growing as a performer and her routines are very smartly chosen to stress her dynamic style and to cover what she lacks in elegance compared to that of her competitors.

The “quad queen” has a good chance to take the Grand Prix Final crown if she lands all her quads.

The reigning ISU Junior Grand Prix Final Champion missed out of Junior Worlds in the past season due to injury, but came back stronger than ever. In the fall, she finally got the triple Axel under her belt, a jump that she has been working on for two years. It was the weapon she needed.

The 16-year-old combines the triple Axel with her solid other triples, notably her triple flip-triple toe combination and her exquisite skating that took her right to the top of the ISU Grand Prix standings. The 2018 World Junior silver medalist has the complete package of technical skills, skating skills and expression. If she skates clean, she’ll be very hard to beat.

Although she gave solid performances and landed her triple Axels in both Grand Prix events, the defending ISU Grand Prix Final champion lost to two different A-squad members in her Grand Prix events. The 2019 Four Continents champions knows that they are no longer enough, but she is hoping to soon put out her quad Salchow that she has landed in practices. A quad in her arsenal, alongside a triple Axel, would improve the her medal chances in the Final significantly.

Currently, the Japanese national silver medalist is not doing a triple Lutz, which is somewhat of a handicap for her.

The delicate Anna Shcherbakova is another fierce competitor that comes armed with two quad Lutzes in her free skating to the Final. The 15-year-old combines her quads with softness and a subtle expression. The 2019 World Junior silver medalist showed some nerves in her Grand Prix debut at Skate America and she has been penalized for wrong edges on her Lutz. While these may be small details, they could definitely make a difference. Nevertheless, the Russian national champion is a medal threat in Torino.

The reigning World champion has developed more and more into a beautiful skater and performer over the past two seasons. During the 2019-20 Grand Prix series, the 17-year-old from Moscow had some issues with underrotations and nerves. Without a triple Axel or a quad, the Olympic champion needs to skate absolutely clean and collect as many positive grades of execution (GOE) as possible to be competitive with the other ladies in the Final and to have a shot at the podium.

The U.S. silver medalist qualified for her first Grand Prix Final, junior or senior, due to a tie-breaker as four skaters had 22 points from their two events. The 21-year-old is a consistent skater and has improved her performance skills, however, without a quad or triple Axel, it will be a challenge for her to reach the podium unless the top ladies make some major mistakes. However, making the Final alone was big step forward for the skater from Illinois.