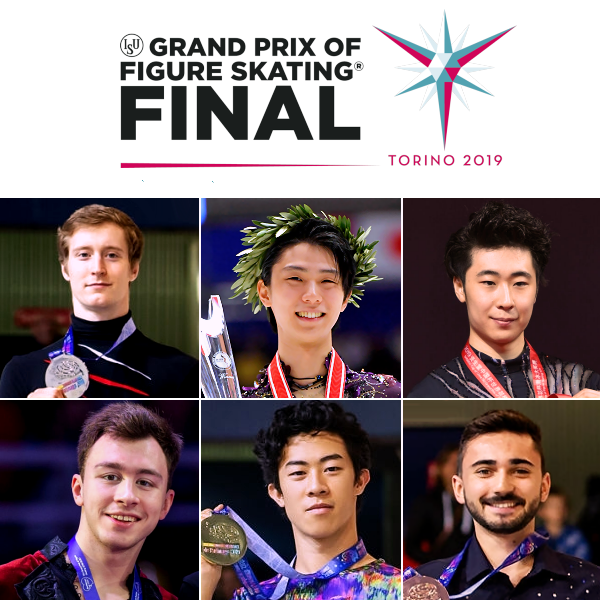 The Men’s event features the “usual suspects” Olympic champion Yuzuru Hanyu (JPN) and World Champion Nathan Chen (USA), who both won their two Grand Prix events this season. The focus in the men’s event will definitely be the battle for gold and silver between these two talented skaters. Boyang Jin (CHN) made it back with a bit of luck and the Final will also welcome three newcomers: Alexander Samarin (RUS), Dmitri Aliev (RUS) and Kevin Aymoz (FRA).

The two-time World Champion missed the Final the past two seasons due to injury. Now he is back and aims at this fifth ISU Grand Prix Final title. Hanyu presented himself in good shape in his two events and set a new personal best in the free skating at Skate Canada. Hanyu comes with his quad loop, quad Salchow and the quad toe-Euler-triple flip to Torino. The two-time Olympic Champion is the favorite, but he needs to watch out for Chen who edged him out of gold at Worlds last year.

The World Champion currently seems to be the only one that can seriously challenge Hanyu. Since finishing fifth at the 2018 Olympic Winter Games, the 20-year-old has won each ISU competition he has entered. Chen was quite solid, but made some mistakes in his two Grand Prix events. The defending ISU Grand Prix champion knows he has no room for error when he’s up against Hanyu. He comes armed with the quad Lutz, flip, toe and Salchow.

The French champion surprised himself by qualifying for the Final for the first time in his career. The 22-year-old has great qualities to his skating and his footwork and the transitions are beautiful to watch. However, his nerves can get to him at times, resulting in missing jumps. Aymoz has landed the quad toe in competition, but the quad Salchow is not quite ready yet.

The skater from St. Petersburg collected a bronze and a silver medal on his way to his first Final at the senior level. The 2018 European silver medalist is an expressive, elegant skater, but his jumps are not consistent and he tends to give points away by making avoidable errors. Aliev has landed the quad Lutz earlier in the season in addition to the quad toe. If the 20-year-old skates clean, or cleaner than the rest, he has a chance to be on the podium.

The two-time World bronze medalist has had some ups and downs since the 2018 Olympic Games where he ranked fourth. He did not compete in the Grand Prix Final in the past three years: he did’t qualify in 2016-17 or 2018-19, and had to withdraw in 2017-18 due to injury. The five-time national champion is working his way back to the top and could be a medal threat if he fires his biggest weapons—the jumps, notably the quad Lutz, toe and Salchow.

Samarin is making his Grand Prix Final debut in Torino, Italy. While the 2019 European silver medalist is lacking in consistency and struggled with some quads in the Grand Prix, the quad Lutz is quite impressive. Compared to the other finalists, however, the 21-year-old is a bit weak on the program components side.