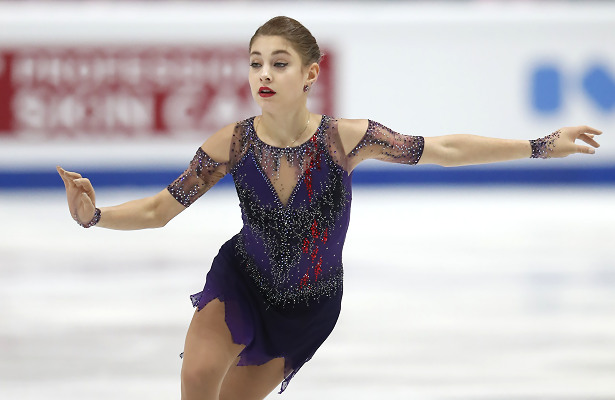 Alena Kostornaia of Russia performs her Free Skate at the 2019-20 Grand Prix Final.

Overnight leader Alena Kostornaia maintained her first spot on the podium to lead to a Russian sweep in the Ladies event in Torino, Italy, on Saturday. Anna Shcherbakova rose from third to win the silver, while Alexandra Trusova rose from fifth to win the bronze. It was the first senior Grand Prix Final for all three ladies.

Kostornaia put out a powerful and technically solid routine to “The Meadow,” “Eyes on Fire” and “Supermassive Black Hole,,” which featured eight solid triple jumps. She landed a triple Axle-double toe and solo triple Axel right out the gate and later landed two triple flips in combination. The 2018 World silver medalist earned many positive grades of execution (GOE) on all elements, including her three level 4 spins and level 3 footwork to earn a new personal best in both the free skate (162.14) and total score (247.59).

“I was motivated to beat the record (for total score) today,” said the 16-year-old who won the junior title last year. “I try to skate the best I can every time. I’m very happy, because just like yesterday, I managed to skate clean, and of course having so many people in the ice rink helped me to do this.”

Teammate Shcherbakova placed first in the free skate with a new personal best of (162.65) after landing a quad Lutz-triple toe and four clean triple jumps. The 2019 World silver medalist fell on her quad flip attempt and also underrotated a quad Lutz, but earned the highest program component scores of the evening in her innovative and technically difficult routine to Six Gnossiennes: No. 1: Lent and The Firebird. All spins and footwork were graded a level 4 and she moved up one spot to second overall with another personal best total score of 240.92.

“I feel good about my skate, but I’m a little bit sad that I didn’t land my quad flip.” said the 15-year-old from Moscow. “I’m happy I did everything else. It’s the first time I’ve tried it (the quad flip) and I will do it better next time. I can do it in practice, but it’s my first time in competition. I was thinking after my first jump that I can do it, but I had a little more height than when I do it in practice and I could not do it clean. But I hear the crowd giving me power to do my jumps.”

Trusova made history when she became the first lady to ever land a quad flip in her powerful program to selections from Game of Thrones. While the jump was solid, the two-time and current World Junior champion popped a quad Salchow and later underrotated a quad toe. Nevertheless, she also produced a super quad Lutz and quad toe-Euler-triple Salchow while earning level 4 on all three spins. She finished third in the free skate (161.73) and moved up from fifth to third overall (233.18) to take her well-deserved place on the podium.

“My skating was really bad,” said the 15-year-old from Moscow. “I had mistakes on the quad Salchow and quad toeloop. It made me upset, because I skated this program clean with all five quads on practices and here on warmup, I also did everything well. I think I was a little bit nervous and got tired by the end of the program. It’s always harder when you fall and have to get up and keep on skating, than when you do everything well. So, I will work on it.”

“The quad flip was one of the main goals for this event and I’m glad that I did it,” said the skater who won both her JPG events in Canada and Russia. “I’m going to work on the jumps I already have and the quad loop is left for the end of the season.”

Japan’s Rika Kihira finished fourth in the free skate (145.76) and overall (216.47). The current Four Continents champion fell on her opening quad Salchow and underrotated a triple Axel (in combination with a double toe), but landed a solo triple Axel. The defending champion also landed two triple flips (one in combination with a triple toe) and showed good level 4 footwork and spins in her creative “International Angel of Peace” routine.

“After the short program yesterday, I felt that there was no room for any mistake,’ said the 17-year-old from Nishinomiya. “But after the fall on the quad Salchow today, I was able to execute the rest of the program well and pull it all together, so I think I succeeded in that way.”

“I was jet lagged for the short program,” explained the Japanese silver medalist, “but I was able to adjust my condition, and now I’m feeling better. As for the quads, a lot of girls are doing different quads now and I know I also need to work harder. Of course I want to first get my quad Salchow consistent, and then maybe I will try quad toe. But at the same time, I also wanted to stay healthy and away from injuries.”

USA’s Bradie Tennell finished fifth (139.98) in the free skate and overall (212.18).  Her elegant routine to music from  Cinema Paradiso featured a triple Lutz-triple toe and triple Salchow, however, she underrotated the back end of the same jump later in the competition. The Skate America silver medalist also underrotated a triple flip (in combination with a double toe-double loop), but earned many positive GOEs for her solid double Axels, spins, and footwork.

“It really feels good,” said the 2019 U.S. silver medalist. “I feel like I went out there and I put everything I had on the line and I’m really proud of that skate. For my first Grand Prix Final, I think it was very good.”

“I don’t have a break in this program,” added the 21-year-old. “Like last year, I had a small break before the step sequence, where I was able to take a breath or two to bring down my heart rate. This year, I do not have that, so it’s basically one long sprint for four minutes, so it’s very challenging, but I still love it. You have to have a good relationship with your program because of how many times you do it—that’s why we change the music every year, because by the end we can’t stand the sound any more!”

Alina Zagitova of Russia showed strong spins and footwork, but struggled with her jumps in her “Cleopatra” routine, falling on a double Axel and underrotating many of her others. The 2018 Olympic and World champion finished sixth (125.63) in the free skate and overall (205.23).