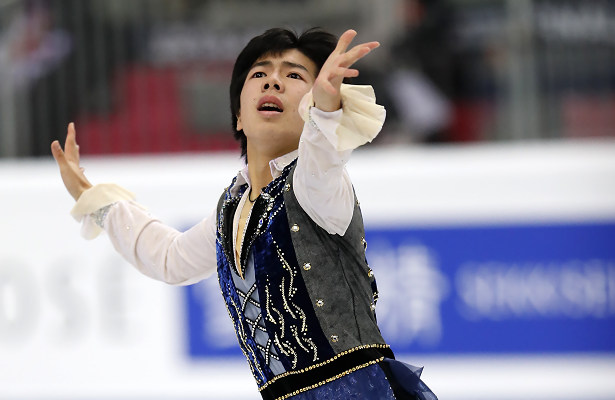 Japan’s Shun Sato leapt from third to claim the gold in the junior Men’s event on Saturday in Torino, Italy. Russia’s Andrei Mozalev pocketed the silver, while teammate Daniil Samsonov earned the bronze. It was the first Final for all three men.

Sato gave an inspiring and solid performance to “Romeo and Juliet” by Nino Rota, landing a quad Lutz, quad toe-triple toe, and quad toe. The Junior Grand Prix (JGP) Lake Placid gold medalist also landed two triple Axels and showed two level 4 spins. He placed first in the free skate with a new personal best of 177.86 and rose from third to first overall with a personal best total score of 255.11.

“I was surprised that I could win here,” said the Japanese junior silver medalist. “I watched Yuzuru Hanyu’s program, and he is able to land the quad Lutz with ease. I think when I was practicing for the Lutz, I put too much force on it, but I watched Yuzuru’s quad Lutz again and again and learned from it.”

Skating to music from the Step Up soundtrack, Mozalev opened with a quad toe-double toe and quad toe. The 2019 CS Warsaw Cup gold medalist then stepped out of the backend of a triple Axel-triple toe and then underrotated and fell on the solo triple Axel. Nevertheless, he was otherwise solid, landing four clean triples while showing good spins and footwork. With new personal best scores, he placed second (159.03) in the free skate and slipped to second overall (241.48).

“I feel good, but I am not in the best mood understandably, because I fell (on the triple Axel),” said the 16-year-old from St. Petersburg. “I don’t know what happened, I think I did not have enough focus for the second Axel and therefore I missed it.”

“I heard how the audience cheered for him and I knew he was landing everything,” said Mozalev of taking the ice after Sato. “He skated with three quads that is a more difficult content than what I have. I realized that he would be higher than me. Nevertheless, I was fighting until the end to do everything.”

Samsonov opened with a triple Axel in his routine to “Per Te,” but turned out the landing of a quad Lutz and then put a hand down and stepped out of a triple Axel. The JGP Baltic Cup gold medalist still landed four clean triples, including a triple Lutz-triple toe, and showed three good level 4 spins. He scored 152.44 for fourth in the free skate, and with a total score of 230.19, managed to hang on to third place overall.

“I feel unhappy with my performances here,” said the 14-year-old from Moscow. “It was a difficult start for me, I had mistakes and couldn’t do everything I can. I’m glad that here I managed to rotate the quad Lutz, however the landing was not clean. At the previous competitions, I always underrotated it. I’m training other quads, but here, we decided to include the most consistent ones.”

“In the future I’m going to keep on learning new elements, because figure skating develops so fast,” added the 2019 JGP Baltic Cup champion, who looks up to Japan’s Shoma Uno. “It’s a big pleasure that I’m the only boy here among Eteri Georgievna (Tutberidze’s) team. With the girls, we are all in good relationships and support each other. We always have something to talk about, for example, about school.”

Yuma Kagiyama of Japan landed a quad toe-double toe as well as six clean triple jumps in his routine to a Joe Jackson medley. The only mistake came when he fell on a solo quad toe, but the JGP Courchevel gold medalist otherwise showed two level 4 spins and strong level 3 footwork. He finished third (155.90) in the free skate and rose from sixth to fourth (227.09) overall.

“Although I did a little mistake in my program, I was able to have a lot of fun,” said the 16-year-old from Yokohama. “The Grand Prix Final is always a competition that I look up to, so I’m really happy to be one of the top six to qualify here. Regarding the upcoming Japan Nationals, I want to do quadruple jumps there and I will work hard on it to show a good performance. While in the senior level people are doing so many quads and even try for the quad Axel, I just want to focus on one quad at a time for now.”

Russia’s Petr Gumennik struggled in his routine to music from The Phantom of the Opera, taking a fall on a quad Lutz, underrotating a quad Salchow, triple Axel and the backend of a triple Lutz-triple loop. However, the defending silver medalist earned level 4s for all spins and footwork to place fifth (140.46) in the free skate and overall (212.62).

“I’ve had a difficult season because I grew a lot and I’ve had a lot of pains in my legs and back,” said the 2019 CS Warsaw Cup silver medalist. “This made it hard to skate my program well. My program today was not the best, but I couldn’t expect it to be perfect as I wasn’t very well prepared. I had to take four days off to recover. But I feel very positive being here at the Final with the best athletes, they really inspire me.”

Daniel Grassl of Italy also had a rough free skate. The 2019 World Junior bronze medalist took a fall on his opening quad Lutz and double Axel and stepped out of a triple Axel. He finished sixth (123.71) in the free skate and overall (195.66).

“I had to change my skates because my last pair was broken,” explained the 17-year-old from Merano. “I only had one day to adapt to them because they’re very hard and different to the skates I had in my short program. I tried, but it’s not enough time, so the performance is not what I wanted. But I’m happy that I’m here. It was my goal for this season.”