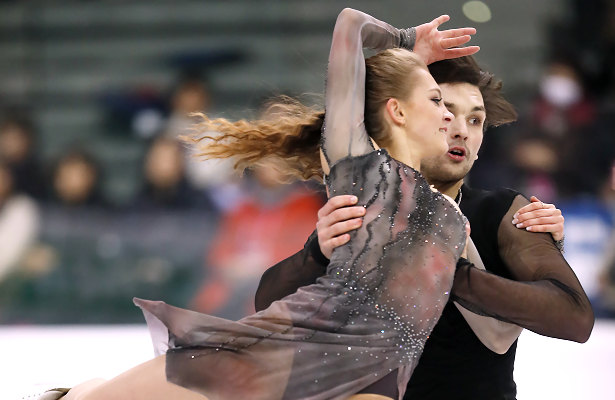 Maria Kazakova and Georgy Reviya maintained their overnight lead to win the title, and in doing so, became the first time a team in history from Georgia to win a Junior Grand Prix (JGP) Final event. USA’s Avonley Nguyen and Vadym Kolesnik won the silver, while Russia’s Elizaveta Shanaeva and Devid Naryzhnyy took the bronze.

Kazakova and Reviya put out a very solid and intriguing routine which featured very strong level 4 twizzles, lifts and combination spin. The diagonal steps were graded a level 3 while the one-foot steps were a level 2. The 2019 CS Asian Open Trophy bronze medalists placed first in the free dance with 106.14 and overall with a new total personal best score of 174.90.

“Today we were skating like for the first time,” said Reviya. “We came out knowing that there was nothing to lose, that we worked not to be afraid of something. People came to watch us and we must show everything we worked on in practice. Of course, we have a lot of emotions now and it’s hard to realize that we won.”

“The next competition is European Championships which will be tough because it’s seniors, and after, we’ll go back to create new elements,” he added.

“It’s a great pleasure for us just to skate and especially to skate for Georgia,” added Kazakova. “We didn’t have any fears today, we were just skating like for the first and the last time. It’s unbelievable to feel this support from the audience. The arena is so big and it’s really motivated us to show our best.”

Nguyen and Kolesnik delivered an intense and classical performance to “Piano Concerto No. 2” by Rachmaninov which featured level 4 twizzles, spins, and lifts. The circular steps and one-foot steps were graded a level 2. The U.S. junior silver medalists were slightly higher in the program components than that of the Georgians, but the technical score was a tad lower, in part due to the level 2 circular steps. The JGP Lake Placid champions finished second in the free dance with a new personal best of 106.02 points and overall (174.74)-missing the top of the podium by 0.16 points.

“We’re a little disappointed right now, but we’ll continue to keep on working,” said Nguyen. “All our competitors were really strong. We were only a fourth of a point behind and we felt we could push and get to the next level, but it didn’t work out.”

“We did the best we can do,” added Kolesnik. “I didn’t feel anything like this before. After I saw the crowd after the Georgians skated, I had goose-bumps. It wasn’t nerves, it was excitement. I wanted to do better than they did.”

Shanaeva and Naryzhnyy earned a level 4 on their lifts and spin in their performance to “River” by Bishop Briggs, however, he earned a level 3 on the twizzles and she a 4. The diagonal and one-foot steps were graded level 2 and the JGP Courchevel gold medalists earned 98.01 points for third in the free dance and overall (164.22).

“It was really fun to skate for such a big audience,” said Shanaeva. “I couldn’t imagine skating for this many people, and even in the warm up, we felt their support and it helped us through.”

“Today was harder than yesterday, for obvious reasons,” added Naryzhnyy. “More elements and a longer program, but it wasn’t bad. We will need to look back at what we can work on as we aren’t totally sure yet about the details.”

Teammates Elizaveta Khudaiberdieva and Andrey Filatov finished fourth (97.96) in the free dance and overall (163.03). The 2019 JGP Riga & Egna champions delivered level 4 twizzles, lifts and spin, and a level one circular steps in their routine to “Sign of the Times” by Harry Styles.

“We are skating together like a real couple for like half of the year, but I’m really happy to have Andrey as my partner,” said Khudaiberdieva. “We don’t set to win everything as our goals, we just enjoy skating and like to make the audience, our coaches and each other happy. The performance was good, but still now I realize that if I had a chance to skate this program again, I would do it.”

“I couldn’t even dream about skating with Elizaveta and we must just work, work and work,” said Filatov. “It was a great experience to compete here, because just before this event, I was so nervous to perform in front of such a big audience thinking about what they would think about me, etc. But in fact it was so great! The audience support was amazing and motivated us a lot. In such conditions, you think that you just can’t make any mistakes.”

Loicia Demougeot and Theo Le Mercier of France also showed level 4 twizzles and lifts in their “Carmen” routine, finishing a close fifth in the free skate with a new personal best score of 97.23 and maintained fifth overall (156.26).

“Next for us is a competition in Holland, and then nationals and junior Worlds,” said  Demougeot. “We’re going to work on the Free Dance, because coming to this competition, we focused on the Rhythm Dance.”

“We were pretty happy even though the Free Dance was not the best we have done this year,” said Le Mercier. “My leg went very tired, very heavy in the middle of the program, and it’s a very fast program, so we couldn’t skate how we wanted.”

Russia’s Diana Davis and Gleb Smolkin put out a good performance to music by Peter Cincotti which was highlighted by level 4 twizzles and lifts. The 2019 JPG Lake Placid & Chelyabinsk silver medalists placed sixth (92.32) in the free dance and overall (152.21).

“We need a long time to build up the partnership and it’s the same for every pair,” acknowledged Smolkin. “But it’s good that we have a great team and great coach to help us together at every competition. We got used to America where we train for about one year. Of course, we miss our families and friends, but we are realizing our goals and this makes it easier. We managed to show what we are working on here, but of course there are things that we need to work on and we will do our best in the future. The skaters in our group are also amazing, they motivated us a lot.”