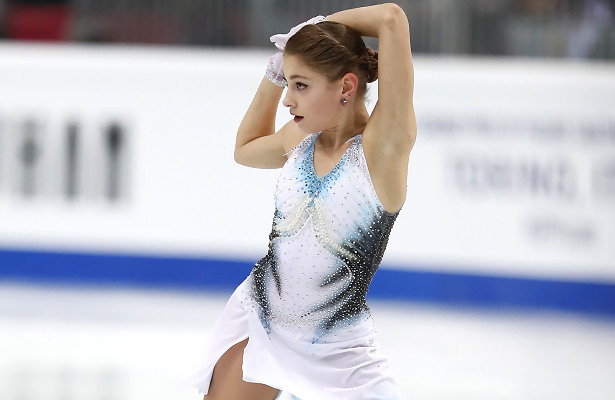 Alena Kostornaia leads a Russian sweep for the top three spots after the Short Program took place in Torino, Italy, on Friday. Alina Zagitova is currently in second, followed by Anna Shcherbakova.

Kostornaia was spot on in her routine to “Departure” and “November” by Max Richter, nailing a triple Axel, triple Lutz and triple flip-triple toe. The 16-year-old, who won both her Grand Prix (GP) events in France and Japan, was stunning, showing strong spins and footwork throughout while racking up many positive grades of execution (GOE). The 2018 World Junior silver medalist scored a new personal best of 85.45—also a new record score for the Ladies’ Short Program.

“I’m very happy because I did my best,” said the 2019 Internationaux de France & NHK Trophy Champion. “I tried to skate my program clean and I enjoyed it. I did what I should and then just watched the points. The coaches told us that the points could be not so big, so I was surprised they were bigger.”

Alina Zagitova was also clean, producing a triple Lutz-triple loop, double Axel and triple flip in her routine to “Me Voy.” The 2018 Olympic Champion also showed very good level 4 spins and footwork and earned the highest program component score of the group after receiving high GOEs for many elements. The 17-year-old from Moscow earned a new season’s best of 79.60.

“I got a season’s best score and I’m happy about that,” said the World Champion. “However, it is not my personal best, so there is room to grow. I feel like I could have skated with more commitment. I was keeping the maximum of control and so I feel I was a bit tight.”

“It is great when the spectators enjoy your performance, because it means you did everything right,” added the defending silver medalist. “I got a beautiful album with many messages from fans. It is just very heavy.”

Shcherbakova also showed a solid performance to music from The Perfume: The Story of a Murderer soundtrack, landing a double Axel, triple flip, and triple Lutz-triple loop. All spins and footwork were graded a level 4 and the 2019 World Junior silver medalist was awarded a new personal best of 78.27.

“I am in a very good mood after that skate,” said the 15-year-old from Moscow. “I felt very happy doing everything today. All practices have been really good, so I could go into the program very calm and I am completely happy with everything I did today. They say you can’t win a competition on the short program, but you can lose it, so this is a good starting point.”

“My short program has had some problems, so we have worked a lot on it to clean it up and get the most points we can for it,” she added. “We wanted to make sure we had no problem with the combination (triple Lutz-triple loop).”

USA’s Bradie Tennell underrotated the back end of at triple Lutz-triple toe, but was was otherwise clean in her routine to music by Kirill Richter. The 21-year-old landed a double Axel and triple flip while showing level 4 spins and footwork throughout with positive GOEs. She received 72.20 points—three points shy of her personal best—for fourth place.

“Overall, I’m a bit disappointed,” said the Skate America silver medalist. “I was a little hesitant going into the Lutz combo, and I think that’s why it was underrotated. But then I settled in, and there was good energy and I’m proud of it. Tomorrow, I’m hoping for no underrotations and I’ll be putting everything I have into the performance. I want the audience to enjoy it as much as I enjoy performing it.”

Alexandra Trusova of Russia underrotated and fell on her opening triple Axel, but was otherwise solid, landing a triple flip and triple Lutz-triple toe. The two-time and current World Junior champion sits in fifth with 71.45 points after her routine to selections from Peer Gynt.

“I’ve been landing the triple Axel more or less consistently for the last week, and we decided to put it into the program at this competition,” said the 15-year-old from Moscow. “I was nervous and was thinking about how to do it correctly, but you have to start doing new elements somewhere, so we decided to do it here. It is better than doing it in the Olympic season. In general I’m pleased with my performance, I managed to rotate this jump. The fall is not that awful, because it’s my first attempt. I will work on it so as not to make mistakes in the future.”

“I always enjoy competitions regardless of the result,” added the skater who won both GPs in Canada and Russia. “I like to risk, and without risking, I wouldn’t achieve what I have by this moment.”

Japan’s Rika Kihira is placed sixth (70.71) after putting a foot down on her opening triple Axel and then falling on a triple flip-triple toe.

“I feel regretful about my performance today,” confessed the 2019 Four Continents champion. “I feel like I don’t have a lot of energy in the evening. I’m a little tired, jet lagged and nervous. It was not the best of what I could do, and now I also understand why. I’m not used to competing in the evening comparing to the morning, and my condition was pretty good in the morning practice. I think I’ll try to have a good sleep tonight and skate a clean free program, hopefully also getting the season’s best score tomorrow.”

“As for the quad Salchow, I will see my condition in the practice tomorrow to decide if I’ll use it in my free skate,” the 17-year-old from Nishinomiya added. “As for the Russian skaters, especially Sasha (Alexandra Trusova) doing five quads, I find it unbelievable that ladies can do that. I was very surprised and think that I also need to work harder. I will learn from today’s experience and do better in the free skating tomorrow.”