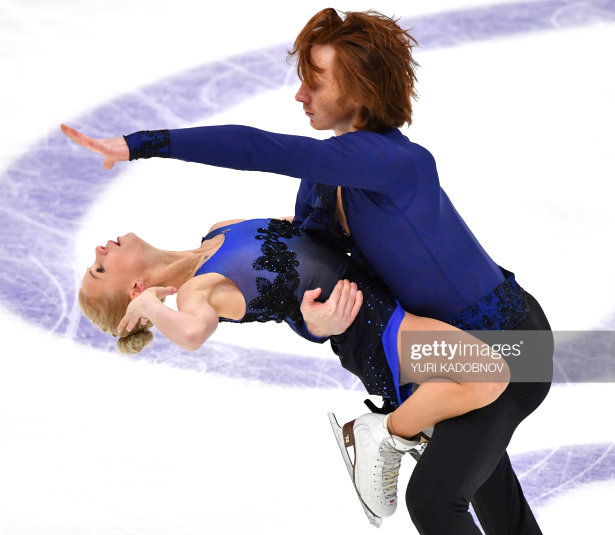 World silver medalists Evgenia Tarasova and Vladimir Morozov dazzled in the Pairs Short Program at the Russian National Championships in Krasnoyarsk on Thursday. Up and coming Aleksandra Boikova and Dmitrii Kozlovskii finished a strong second and Daria Pavliuchenko and Denis Khodykin are currently ranked third.

Tarasova and Morozov showed much improvement over their Grand Prix events. They had failed to qualify for the ISU Grand Prix of Figure Skating Final after coming in second and third at Rostelecom Cup and Skate Canada. In Krasnoyarsk, however, they put out clean and confident performance to Ravel’s “Bolero” that included a big triple twist, a side by side triple toe and throw triple loop. The two-time European Champions collected a level four for the twist, death spiral, side by side combination spin and the reverse lasso lift to score 83.91 points.

“We’re pleased that we were able to show a clean performance and to make our coaches, the spectators and ourselves happy,” said Tarasova. “Now we will focus on the free.”

Not going to the Grand Prix Final might have even been beneficial for the two-time World silver medalists. “We didn’t stop working and we prepared for Nationals,” said Morozov. “We have worked on the programs and made some changes. We used the time for the preparation and it was quite successful.”

Boikova and Kozlovskii’s performance to an instrumental version of “My Way” was highlighted by a triple Salchow, level-four triple twist and throw triple flip. The 2019 European bronze medalists notched 80.39 points.

“We’re also happy with the short program, honestly,” said Kozlovskii. “It was a good, working performance. The free skating is still to come, the main day. Tomorrow, we have training and we’ll recover a bit.”

“The Final is done, it is history,” he added when asked about coming back from a poor Free Skating in the Final. “We draw our conclusions and we take the most important moments to prepare to show the maximum in the next event.”

“Our performance worked out,” Khodykin commented. “We can skate the short in any condition.” The 2018 World Junior Champions also had a quick turn around after the Final. “Last year there was even less of a break, just one week. With this experience, it was easier for us to deal with the situation.”

Alisa Efimova and Alexander Korovin gave a clean performance to “Carmina Burana” as well, nailing a triple toe and throw triple loop. The team trains with Boikova and Kozlovskii in Tamara Moskvina’s Club in St. Petersburg, but work mainly with Oleg Vasiliev. They finished fourth with 72.83 points.

Apollinariia Panfilova and Dmitry Rylov placed fifth with a dynamic program to The Matrix soundtrack that featured a triple twist, double Axel and throw triple flip. However, the ISU Junior Grand Prix Final Champions lost a level in their side by side combo spin (71.51 points).

“I can say that we skated well, a lot better than at the Junior Grand Prix Final,” said Panifilova. “I haven’t seen the levels yet, but the quality of the elements was definitely better. However, we were not able to prepare the way we would have liked to due to Dmitry falling ill. We came here to present ourselves among the senior teams and I think fifth place at senior Nationals (in the Short Program) is not a bad result for us.”

Another junior team, Alina Pepeleva and Roman Pleshkov, placed sixth with a clean performance on 70.57 points.

The usually consistent team of Anastasia Mishina and Aleksandr Galliamov disappointed. Mishina had an off day, falling on the throw triple flip, stumbling in the footwork and ending the side by side combination spin too early. The ISU Grand Prix Final bronze medalists are in eighth place (67.73 points).

“I don’t know the reason for these mistakes,” said Mishina. “I felt normal, we didn’t change anything in our preparation. Sometimes national events are more nerve-wrecking than international competitions, because it is a home atmosphere, everyone speaks our language. But I don’t want to blame that for the mistakes.”

“We are not robots, even machines sometimes have a mishap,” Galliamov added. “Tomorrow we’ll have training and then take a walk to forget about figure skating a little and it will be a new day for us in the free skating. We have absolutely nothing to lose.”

The Pairs Free Skating is scheduled for Saturday.