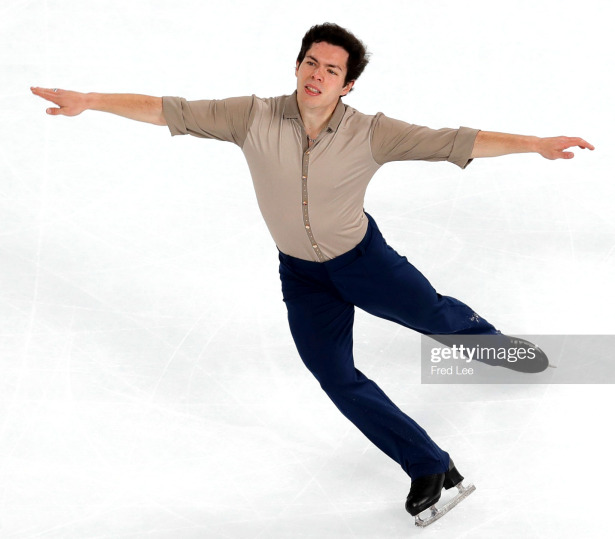 Keegan Messing landed on the top of the heap following the Men’s Short Program on Friday night with 92.66 points to position himself to win his first national championship with a near-clean skate. The 2018 Olympian performed a heartfelt routine set to “Perfect” by Ed Sheeran and managed an exceptional quadruple toe-triple toe and triple Axel, but pitched forward and put his hands down on the triple Lutz. In the program dedicated to his new wife, Messing also demonstrated excellent positions on the flying change foot camel spin, an exuberant footwork sequence and a fast closing combination spin.

“The feel of the program, just the feeling of being married and being able to take that feeling of love and put it out on the ice… Lance Vipond, he did such an amazing job being able to take that emotion and give me something to skate to that I can, in every step, feel the emotion of, the connection I have with my wife,” said Messing. “I gotta say, it’s the first time that I will be skating in my single career that I don’t feel alone on the ice. It’s like she’s right there skating with me and I never want to get rid of this program because of that. It’s one of the best feelings I have from competing.”

Messing, who will turn 28 later next week, admitted that he is so attuned with his wife that he was distracted during the warm up because he could not spot her in the Paramount Fine Foods Centre. However, he locked eyes with her during the performance as he prepared for the triple Axel.

“I just saw her walking down the aisle again and I almost started bawling again. I felt my face heating up again and I was like ‘Just stop! Triple Axel! That’s where we are right now!'”

The 2018 Skate Canada International Champion was without explanation for the error on the triple Lutz. “It’s the most consistent jump I have. I just got a little bit of the wobbly legs going and managed to save it.”

Two-time Canadian champion Nam Nguyen was both dynamic and flirtatious in his routine set to music from “Blues for Klook” to finish second with 88.04 points. He performed an excellent triple Axel and triple flip, but during his combination, landed the quadruple Salchow too close to the boards and was only able to tack on a double toe on the end. The 2019 Skate Canada International silver medalist also showcased impressive spin positions, demonstrating his flexibility.

“It went alright,” he said of the outing. “Just some nerves; I watched Keegan’s entire skate and it was very special to see him put that out there, especially that quad combo. That was a real beauty there.”

“I think for sure on my own skate, I was a little bit tentative but I was still able to push everything through,” Nam continued. “Just that short program, I tried performing for the audience and really tried to interact with them.”

“They all did very well,” the 21-year-old said of his competitors. “We have a lot of strong boys out here, so it’s exciting to see. Keegan did his job. Roman did his job. So it will be interesting tomorrow.”

In third place, Roman Sadovsky skated a sumptuous performance to “Fly Me to the Moon” by Chris Mann and earned 85.02 points. He landed a beautiful quadruple Salchow and triple Axel, however the judging panel deemed the Salchow to be underrotated. The 2019 NHK bronze medalist squeaked out a triple Lutz-triple toe in which the back end was also marked as underrotated. However, all of his non-jumping elements were graded level four.

“If I put it out there, it’s definitely a world class score that I can get,” Sadovsky said of the respectable score despite the underrotations.

The Canadian fan-favorite, who has never won a medal at the national championships, said his season has provided some strong finishes to muster his confidence.

“The best short that I have had was Finlandia this year,” the three-time ISU Challenger Series medalist reflected. “That was sort of a break through short program for me, because short programs have always been that program that I have the most nerves. It’s the first one out. The first combo, quad Salchow-triple toe, it’s a big one and in Finlandia, I handled it way better. This time, it was a little bit of rushing, my timing changed. I was so far off to the side, I was like, ‘Oh no, here we go.'”

“At NHK, I finally got a really strong long program out and it finally reflected how I can train and hopefully that can happen again this time, because I feel stronger going into this than I was going into NHK,” summed up the 20-year-old. “So I am in the situation of a climb back. I guess for tomorrow, I can use this as experience and then going into the long, it’s a little more chill and at ease.”