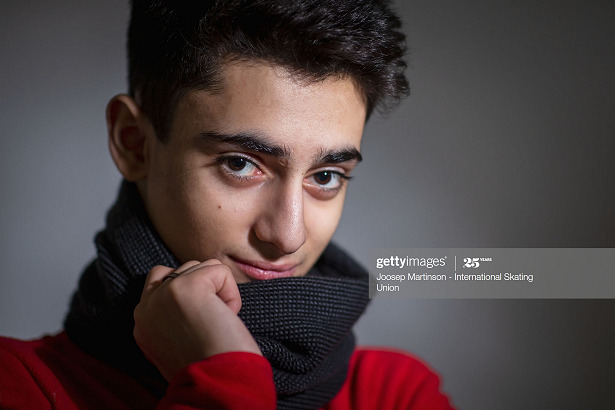 Artur Danielian of Russia poses ahead of the Gala Exhibition during day 5 of the ISU European Figure Skating Championships at on January 26, 2020 in Graz, Austria.

Russia’s Artur Danielian gained more and more momentum throughout the 2019-20 season and topped it off by taking the silver medal in his debut at the ISU European Figure Skating Championships in January. As the second-best Russian man in Graz, behind new European Champion Dmitri Aliev, the 16-year-old was named to the World team and was excited about going to Montreal.

“The preparation for Worlds progressed as we were getting closer,” Danielian shared. “A little over a week before (Worlds), I was building up and I was well-prepared as we planned.” However, Worlds never happened and instead of travelling to Canada, Danielian had to stay at home in Moscow. “I learned about the cancellation the day it was announced. We had been preparing until the last moment, but then in the evening (of March 11), my coaches informed me about the cancellation and told me not to be upset and work on the quads while I’m in good shape.”

The skater worked on different kinds of quads, and especially on loop and flip as he revealed. “I want to increase the difficulty, to develop in order to be able to be seriously competitive with the senior skaters,” he said.

The European silver medalist was able to continue to train until March 22, then the ice rinks in Moscow were closed because of the Corona virus pandemic. Before the general curfew was introduced in Moscow, Danielian was running outside and did full off-ice practice in order to stay in shape.

“Since this week, I am training at home,” the National silver medalist said. He is working out twice a day. “I’m also studying online as long as I have more time and I’m developing my artistic and culinary skills,” he shared. Danielian’s hobbies include drawing and cooking. “I’m also watching serials,” he added. He keeps himself busy and does not get bored—a good way to cope with the uncertain and scary situation.

At press time, there were no dates when the skater, like many others, can resume on ice practice. Nevertheless, Danielian and his team are thinking about next season.

“Depending on the situation, when we get back on to the ice, we’ll start mounting the programs,” he said. “We’ll change the free for sure and we’ve tentatively decided about the music. However, there is still time and maybe I’ll suggest another music that I like more. We found a music for the short program, but we’ll have to try it on the ice, and if it is not better than the short program this year, we’ll keep the old one. Although we have some options, I don’t stop listening and searching and I’m exchanging ideas with the coaches.”

Danielian’s 2019-20 programs to Don Juan (Short Program) and La Traviata (Free Skate) were popular and well-received. Europeans obviously was a highlight for the young skater. At first, he had a hard time believing that he had won the silver medal.

“In the morning (after the Free Skating) I was happy that it was not a dream after all and that all that really had happened, but I still hadn’t fully realized it,” he recalled. “Europeans was a huge experience and it was positive and I will need it for the future. The most important things I learned are not to be afraid, do what I am capable of, do like I do in training, and always go out with that mindset for my skate,” he summed up.

The 2018 World Junior silver medalist felt that being a newcomer that nobody really considered as a medal contender made it easier for him. Plus, he enjoyed the atmosphere at this big event. “The atmosphere was very festive, there was a lot of support from the spectators and there were a lot of spectators,” he recalled. “That was the first time for me. I was not used to it and maybe that’s why I wasn’t distracted by other things. My task was just to skate well.”

The season had started with a few ups and downs. Although Danielian collected two silver medals in the ISU Junior Grand Prix of Figure Skating Series, he was only a substitute for the ISU Junior Grand Prix Final. “It was upsetting, but I realized it was my own fault. I didn’t show what I would have needed to show and I cannot make mistakes. This made me work even harder and to prove that I can compete at major events, qualify for them and show decent performances,” he shared.

One problem was the quadruple Salchow that Danielian struggled with at the beginning of the season. It took some time to get it more consistent. “I was kind of stopping myself, I was lacking confidence,” he explained, “but with time I landed it. I went for it in competition. I fell, but then I landed it in one program, but not in the other. The confidence came step by step. It is a new element, I couldn’t even imagine in my head how to do it in competition. I didn’t have the image in my head. I had to sacrifice a few competitions before it started to work.”

Danielian, who moved as a 12-year-old with his family from Volgograd in the south of Russia to Moscow to join the CSKA club, is coached by Elena Buianova (Vodorezova) and Marina Selitskaia. Impressed by 2014 Olympic Champion Adelina Sotnikova, he wanted to train with Sotnikova’s coach, Buianova, and his dream came true in 2016. In addition to Buianova and Selitskaia, the European silver medalist also works with former ice dancer Maxim Zavozin and former single skater Alexander Uspenski as well as choreographer Irina Tagaeva.

“I want to thank them all for what they did, and also the massage therapist, doctors and our federation for their support,” Danielian said. Sometimes Buianova travels with him to competitions, sometimes Selitskaia. “They prepare me in a different way, but both ways suit me,” the skater noted.

Danielian is the youngest of three children in his family and the whole family had to move for his career. They did not regret it and were very pleased when he made the podium at Europeans. “They were very happy and said that they are proud of me,” the skater shared. The parents and his sister and brother stayed at home. They usually don’t come to the competitions, which is what Danielian prefers. “It’s extra nerves and I don’t need that. My mother gets very nervous, my sister says it’s better not to let her watch. They get more nervous than I do. I don’t let them come to competitions. Once, they didn’t listen and I didn’t skate well and said they shouldn’t come again.”