On a sunny day in July, Japan’s Koshiro Shimada is practicing skating skills, jumps, and his programs in Telfs, Austria, during a summer training camp of the Skating School of Switzerland. He is working hard, but enjoying what he is doing and sharing a laugh with training mates and listening attentively to what coaches Stéphane Lambiel and Robert Dierking tell him. The atmosphere is pleasant and productive.

Following some ups and downs this past season, the 2018-19 ISU Junior Grand Prix Final bronze medalist is highly motivated. He can’t wait to get out on to the ice to compete and show his new programs. Like many other skaters, while he knows that competitions are uncertain due to the COVID-19 pandemic this season, the 18-year-old is nevertheless working hard and preparing.

Shimada already has three new programs – two competitive programs and an exhibition number – and is excited about them.

“First, Stéphane and I did the exhibition to do something fun and interesting,” shared the skater. “The music is “I Will Remain” by Matthew and the Atlas. It feels very fun, enjoyable and free.”

In addition to the exhibition routine, Lambiel also choreographed the free skate prior to Junior Worlds and during the quarantine before the skater came back from Japan. It is set to Rhapsody on a Theme of Paganini.

“This music I feel is very matching and there are vocals in the second half and I can feel the energy from the vocal and I feel so much speed going into the choreo sequence,” explained Shimada. “It’s a very nice program. I really love doing it in practice and I’m looking forward to showing it to everyone. The first part is the classical version, performed by Chinese pianist Lang, then I have José Carreras singing.”

While Lambiel suggested these pieces to his student, the athlete himself selected “Fire Dance” performed by Jennifer Thomas for his short program.

“It’s very dramatic and on fire,” the teenager noted of the routine which was choreographed by Kenji Miyamoto while he was in Japan.

“Koshiro’s programs were decided rather quickly as we had time after Japanese Nationals and we wanted to do it quickly so it is done,” explained Lambiel. “Now we are already working on run-throughs and we enjoy the new programs. For me, this time of creating is always enjoyable, seeing the new programs, the new music, and to discover something new—new sides that are a bit more complex—and to repeat until it becomes automatic. These are two great programs and he is a great athlete.”

Lambiel is happy with the progress Shimada has made, stating that he has grown up quite a lot, both physically and mentally. The coach also feels that Shimada’s way of thinking and communicating has developed a great deal since he first came to the school three years ago.

“He was very young,” recalled Lambiel of Shimada. “He didn’t speak much English and he didn’t have much experience. Today he is a young man, he has his rhythm, he can prepare his food, he knows to take care of himself, and he is able to say what he is thinking and what he wants, as well as his opinion. He has learned a lot and that bodes very well for his future.”

Shimada has also made a lot of progress technically and has become more consistent with his quad toe and quad Salchow.

“He didn’t do badly at the Grand Prix,” said Lambiel, “but I think he had an opportunity that he didn’t seize. At Skate America he wasn’t great in the short program, but it was better in the long program. At NHK it was the opposite. He did a good short and then he didn’t follow up in the long program. It was similar at Japanese Nationals –a good short, but he didn’t follow up. Each time he had an opportunity to show who he is and then he didn’t use that. It was his first senior year, so to me, his perspective really is to be able to have the chance to show what he is worth, because in practice, he can do a lot. It would be great if he can show what he can do. For him it would be big step do a program with the quad toe and the quad Salchow, in the short and in the long program.” 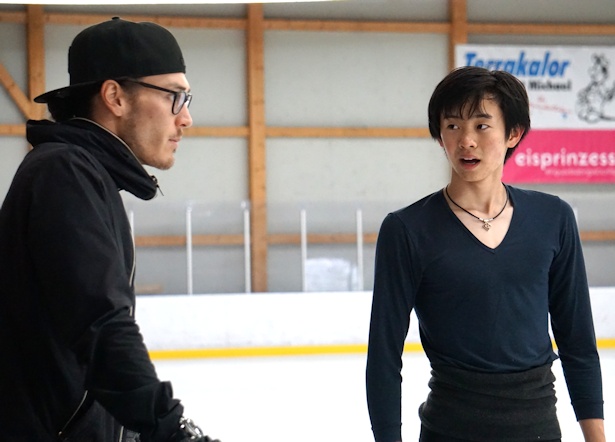 Koshiro Shimada talks with Robert Dierking during a session at a Skating School of Switzerland summer training camp.

The past season was Shimada’s first at the international senior level and it was a big learning experience for him. In fact, it was a very tough one.

“When I went to Skate America and NHK, I felt that I was still weak,” the skater recalled. “That feeling is stuck in my heart. It is hard to control my mind and I also had a few injuries, so I couldn’t have a good practice. I didn’t feel any confidence and so it was a hard time. Every competition had something. So I was almost crying at every competition, but then I got stronger.”

However, Shimada feels more confident and feels the past year was a good experience for his skating career.

“I can say, I’m ten times better,” the 2019 Nebelhorn Trophy silver medalist said. “I have learned to be stronger, to keep going. In competition practice I feel very good, because there is no pressure, no reason to hold back. But when my program is starting, then I’m holding back and I’m saving energy. That’s the reason why I couldn’t do well. Now in the practice, I’m trying to do everything with full energy. My stamina is getting better, I’m pushing myself better. That’s what I have learned from my experience.”

After going home to Japan at the end of March to spend time with his mother, Shimada, who has a residency permit for Switzerland, was able to return to Europe at the end of May and resume on-ice training.

“At the beginning, it (the COVID-19 situation) was okay (in Japan) and I think Switzerland was more dangerous than in Japan at that time,” said the skater. “It was hard to decide to go back to Japan, because I really wanted to continue to practice in Switzerland, but Stéphane said, ‘you have to meet your family.’ It was my decision, but he recommended to go back to Japan, so I followed that idea.”

At home in Ehime, Shimada first had to spend two weeks in quarantine before he was able to skate for ten days at a local rink. Then the rink was closed and the skater, like almost everyone, had to keep himself fit with off-ice exercises. Luckily, he found some distraction in studying.

“This is my first year at university,” he said. “I am doing online university and it helps me to improve as a person. I get some other feeling than from skating.”

The skater, who is studying psychology, is currently learning about behavior analysis and feels that it is useful for skating as well as it gives him ideas.

At present, however, competitions and results are not on the top of the agenda. The focus for him is to enjoy the skating moments, feel the ice, and embrace his new motivation.

Again, due to COVID-19, it’s difficult to make any plans for the 2020-21 figure skating season. In fact, the Japanese Skating Federation has already announced that they will not send skaters to any of the Challenger Series events. Therefore, Shimada thinks he will start competing at Regionals in Japan.