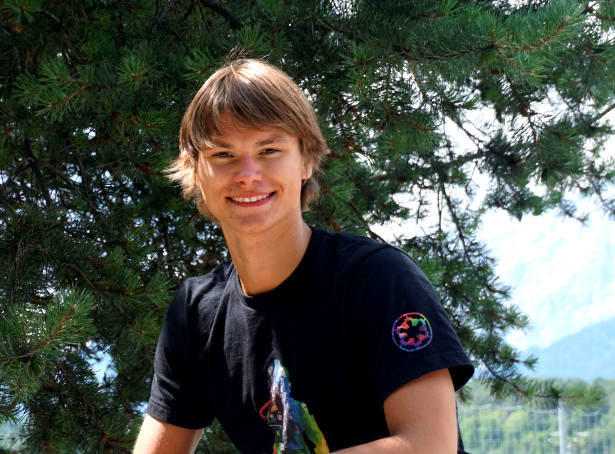 Deniss Vasiljevs of Latvia at summer training camp in Telfs, Austria, in July 2020.

Latvian Champion Deniss Vasiljevs has been immensely popular with fans from all over the world since he first competed at the 2014 ISU World Junior Figure Skating Championships where he immediately stood out as a born performer. Six years later, Vasiljevs has four World Championship and five European Championship appearances under his belt, is a 2018 Olympian, and more admired than ever. He loves to perform for his fans and can’t wait to get back out on the ice in front of an audience. The skater, who turned 21 earlier this month, is busy preparing for the season and has two new programs.

Coach Stephane Lambiel feels that both routines are “completely unexpected.” The new free skate is set to music from the ballet Romeo and Juliet by Sergei Prokofiev, and Vasiljevs is excited about having the opportunity to show a different side in a “different emotional setting.” The skater worked with a Ukrainian prima ballerina who was a principal dancer at Béjart for this program.

“It’s dramatic, but it is very beautiful and classical and aesthetic,” Lambiel revealed. “There is this magic of Russian skating in Deniss. He also has this craziness and you can see that.”

Vasiljevs wants to keep the music for the new Short Program under wraps at this time but shared that the music is a composition from a Latvian violinist.

“The first program (free skate) is very much me and the second is very patriotic in a way, because it is a very difficult composition and has Latvian roots,” he said. “So, in this season, I’ll have the opportunity to show myself from a somewhat different side.” “We wanted to use this special Latvian connection,” Lambiel added. “The music is very strong and also dramatic. It is also something very complex where he plays with the rhythm. He has not yet completely absorbed the style of the short program, because it is new for him.”

Lambiel is happy with how his student, who moved to Switzerland in 2016, is developing, stating that he has progressed not only mentally, but technically and artistically as a skater as well. He recalled meeting Vasiljevs for the first time at the Youth Olympic Games in 2016. Later that year, Lambiel choreographed two programs for him, and after that Vasiljevs, who was previously coached by Olympic Champion Alexei Urmanov and Ingrida Snieskiene, decided to join his school in Champéry, Switzerland.

“A nice thing about this age is that you start to take responsibility,” Lambiel pointed out. “For a coach, this is a magnificent moment when you can trust that the skater knows what he needs, he finds his way. It is very difficult for me to tell them. It is up to them to be autonomous and to digest what they want and which direction to take. I can help them, guide them, but in the end, it is not up to me to make the choice for them. I feel that Deniss has covered some distance and maybe this pause was a good thing for him to revitalize.”

During the lockdown, Vasiljevs stayed in Switzerland as he was worried that he would be stuck in Latvia when the rink re-opened. The Latvian Champion felt that he used his time well.

“I was actually lucky, because I was in a village, in the mountains. I spent a lot of time outside and I worked a lot physically,” he recalled. “Overall, my days were very busy. With the exception that I really missed the opportunity to go to Japan (for shows), this time was even to my taste, because since we trained less, I was able to recover from what hurt and rehabilitate physically and I started this season physically easier than before. But this was the longest time that I haven’t skated, 10 weeks.” 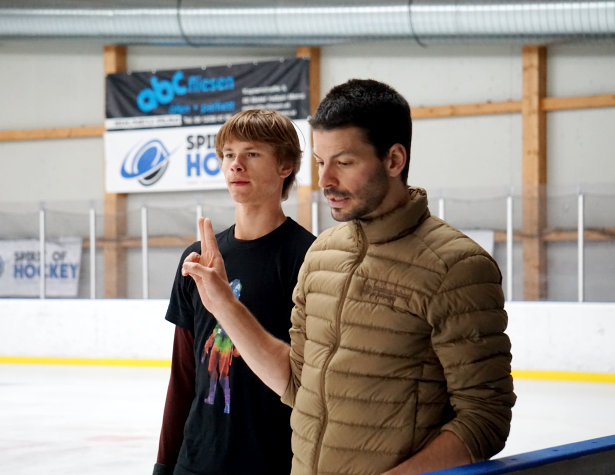 Deniss Vasiljevs of Latvia with coach Stephane Lambiel during training.

When Vasiljevs got back on the ice, it felt a bit weird at first and he needed to adjust and channel his emotions as he wanted to do everything right away.

“It was like hugging a tree that was too large,” he explained. “Therefore, at the very beginning, I had to get used to skating again, to get the feeling of being in skates again. My feet didn’t really like that they were put back into skates, but it went well.” He credits his coaches for preparing him well off the ice. “I liked working on the programs and all that. The summer started a lot later than it should have started, but it is effective.”

Vasiljevs also used his time for studying. He finished his second year of studies of human science at university.

“The time we were in isolation allowed me to study without that tight schedule,” he said. “Before that, you are skating and studying and it is all on the run. This time it was much easier and calmer and finishing the year went better than last time.”

However, like many others, Vasiljevs was upset and frustrated when the 2020 ISU World Figure Skating Championships were cancelled due to the pandemic. The skater said it took some time for him to recover from that disappointment.

“I was a lot better prepared than I was before,” the 21-year-old said. “It was really the peak of my preparation of the whole year. To miss the opportunity to perform when everything was ready … We should have left in a day and then it was cancelled in the evening. My first reaction really was anger. I had worked a lot! it was hard physical work and it was also tough mentally. I prepared, I revamped the program to make it better, I put a lot of effort and emotions into it and it was for nothing.”

Vasiljevs is also very unhappy to miss the opportunity to perform in shows over the summer as he loves to perform in front of a crowd and feeds off this special energy.

“Now I really can’t wait until they let us out and this will be wild,” he said. “The real thing is when you go to the Grand Prix, to competitions where are many people or to shows. It feels like in a coliseum, an arena. A full arena, full of emotions, this is what I really want to experience. This is the drive that I am missing now. I want to feel the emotions of a large group (of people). If there is a Grand Prix, I’m happy to go. I can’t wait to get back and continue the life that I had before.”

While the 2018 Olympian also misses his friends and fellow competitors, he sees some positive consequences of the pandemic.

“I am glad that with all that there is less waste, less spending energy and resources in vain,” he said. “There will be less useless trips, everything will be more goal oriented, more organized. I realized that there was more pollen this year and nature was more blossoming. I liked that, that was nice. This is a world that many people forget about, unfortunately. The chance to return to this is very important for everybody.”

Nevertheless, Vasiljevs can’t wait to compete again and he sets an important goal for himself — a quad.

“I’m in a good physical shape, I can do that. It is about finding that inner courage and I want to find that balance to control my physical strength in everything,” he elaborated.

For sure, Vasiljevs’ numerous fans are waiting for his return to the major stage as impatiently as he himself.