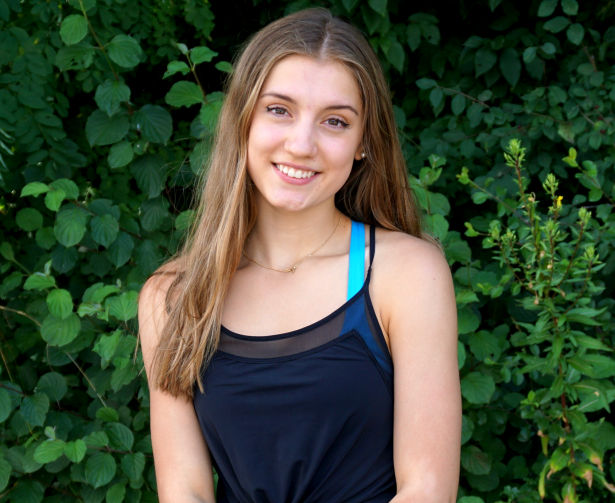 The COVID-19 pandemic has changed the lives of many people and Switzerland’s Alexia Paganini is no exception. In fact, the situation ultimately led to a coaching change for the 18-year-old in May when she left the United States, where she was born and raised, to move to her second home country. She is now looking forward to a fresh start with her new coach Stéphane Lambiel and his team.

“In quarantine, I was thinking about my skating and what I want to do, my career and all this,” Paganini recalled. “I simply wanted a change and for everything to be a bit more professional and organized. I was thinking of a bunch of different places, all my options that I wanted to train at. I came on Champéry, because I liked how it was a school.”

The skater especially was not only happy with on-ice training, but how the off-ice training was organized. The 2018 Olympian went to Switzerland at first as her training options in New Jersey were very limited due to the pandemic.

“I trained with the school for a day and I really liked it and I asked Stéphane if he would take me, and he said ‘yes,'” Paganini shared with a laugh.

“Since she is Swiss, she asked if she could come, and as I am the national coach, she had the possibility to benefit from our infrastructure,” Lambiel explained. “So when we opened on May 21, she joined us. While we were waiting, she said she would like to do a program with me, so we did the free skating. Then Salomé (Brunner, choreographer) came and did the short program and then Alexia said, ‘I’d like to stay here.'”

Lambiel went on to say that everything worked out for his new student, particularly the energy of the group, the way they work, and the planning.

“Last season, she had thought a lot about a change in order to progress and do something new, so this was just the opportunity to do so,” he added. “Now we have been working together since May 21 and it happened quite naturally.”

Paganini integrated herself very quickly into her new training environment and gets along well with the other skaters such as Deniss Vasiljevs of Latvia and Japan’s Koshiro Shimada. She feels she made the right choice.

“I really like working with Stéphane, because he has a really good understanding of how skaters think and how we feel,” she observed. “A lot better than anyone I’ve worked with, because I think he stopped so recently that he really understands us more. I think his strength is that he knows how to get the best out of each one us individually and he knows how we all think.”

Lambiel also enjoys working with his new student and feels they had a good connection from the start.

For the short program, Paganini selected Beth Hart’s “Caught Out in the Rain” together with Lambiel and Brunner.

“I wanted something a bit more cool, slow, and jazzy,” the high school graduate said. “Madison Hubbell and Zachary Donohue did a free dance to that music and I really liked it. It was kind of the style I was looking for, a bit more mature.”

The new long program Lambiel did for Paganini has a Spanish theme and is set to the soundtrack from Hable con ella by Alberto Iglesias and to Le di a la caza alcance by Estrella Morente and Michael Nyman. Lambiel proposed the first song while Paganini found the second song.

“In the first part I’m just dancing on my own, in the Spanish part,” the skater explained. “I’m like reaching for him, a man, and then we’re kind of having a bit of a moment together. In the second part, we are separate and I’m a bit angry at him. I’m suffering because I miss him, but at the same time, I’m angry at him. It’s not so much a story, it’s more about showing specific emotions throughout the program.” she added.

Paganini feels that this program helps her to look sharper and more refined. She feels that it is very important that each movement is polished.

“So that’s kind of why we did this Spanish theme, because there are a lot of fingers and arms,” she said. “When we thought about the free skate, we thought Spanish would be good.”

Paganini used the quarantine time to focus on her studies and graduated from high school. Now she wants to prepare for the entry exams for college and plans to take them next spring. The skater plans to start studying after the 2022 Olympic Winter Games. Currently, she’s interested in communications, but shared that this could still change. 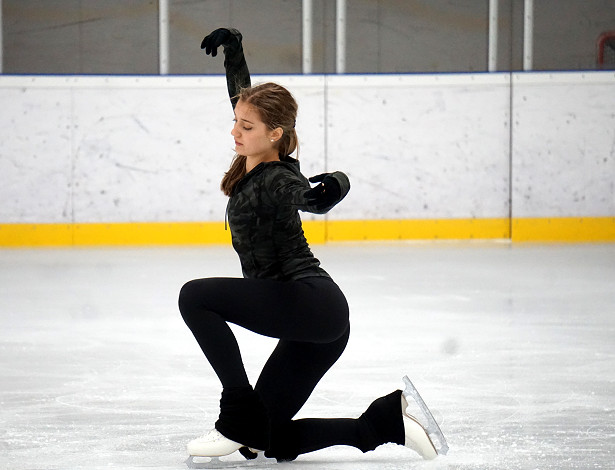 Alexia Paganini practices during a summer training camp in in Telfs, Austria.

The skater, who was born in Greenwich, Conn., feels that the quarantine time has actually helped her grow as a person. That it helped her to clear her head a bit and focus on her life plans, although she still missed skating a great deal and no longer takes it for granted.

“Now I can kind of think clearer and I know exactly what I want,” she said. “Through quarantine I had lots of time to just process everything I did the past couple of years and then make a clear plan of what I want to do. I’m actually happy, because I never spent so much time off the ice. I had time to really think about what I wanted to do.”

Looking back at the past season, Paganini is happy with her fourth-place finish at Europeans – the best she feels she could have done with the dominance of the Russian girls with their quads and triple Axels. However, she feels like she needs to be stronger at the beginning of the season and this is something she wants to change.

Last season, Paganini ranked ninth and seventh at her Grand Prix events at Skate Canada and Rostelecom Cup. She finished sixth at the Challenger event Autumn Classics in Canada. Moving forward, she wants to strive for good showings at the beginning of the season.

“I feel like the last few years I kind of didn’t have such a good first half and then I had a good Europeans and then everybody only remembers Europeans,” she admitted. “However, if I think about the whole season, it actually wasn’t so good. I didn’t do a good challenger and both my Grand Prix (events) were not my best.”

At present, it is still unclear when and where her first competition will take place, so in the meantime, Paganini is working on improving her skating.

“That’s really the main focus,” she said. “We’re not really focusing on preparing for competitions, but if there is, for example, no first half of the season, there is also Swiss Cups that I will do and we can just practice competitions at our own rink or we have like a simulation.”

“No matter what, I think I’ll do small competitions or even a fake competition,” she added. “If you don’t compete and get adrenaline for a while, it’s harder when you come back and you do compete, especially if your first one is going to be Europeans.”

Coach Lambiel particularly wants Paganini to work on her consistency.

“She is a beautiful skater,” he pointed out. “She has a big technical potential and she has a very nice energy on the ice. She is special to watch. I think she has something extra. Coming from a small country, what will make the difference is the consistency for sure. If she shows consistency, she will enter into a group of skaters that are the best of the world. But in order to get there, she really needs to work to be present in each competition. This makes the difference. Which competitions that will be is another question.”