Anastasia Mishina and Alexander Galliamov are part of the squad of young and strong pair teams from Russia that are conquering the figure skating world. The 2019 World Junior Champions left their mark in their senior debut season last year, qualifying for the ISU Grand Prix of Figure Skating Final where they claimed bronze and were the highest ranked Russian team. However, uncharacteristic errors in the short program at Nationals kept them off the podium and they did not make the Russian team for the 2020 ISU European Figure Skating Championships.

Soon after the season ended prematurely due to the Covid-19 pandemic, Mishina and Galliamov switched coaches, going from their long-time coaches Liudmila and Vasili Velikov to the legendary Tamara Moskivina and Artur Minchuk. It was a mutual decision, but not a quick one.

“We thought about it for a long time, because it is a big step,” Mishina shared. “We hesitated, because we had a good relationship with our (previous) coaches and it is still good. The human factor did not let us switch just like that. It was a bit difficult for both of us psychologically, because we understood that it was not quite right, just from a human point of view, but for the results in the sport it was worth changing.”

“We wanted to progress further, to be able to perform and win (in high-level competitions), and to have better elements and better programs,” Galliamov agreed.

There is a transfer period “rule” within the Russian Figure Skating Federation, and the team officially applied during that time.

“I agreed (to take them on), because it is better to coach two (high-level) teams,” said Moskvina. “It is more fun for them and it is competitive with sparring partners. They are a high-level pair and are members of the national team. It is a motivating and good-natured collaboration. It is a joy to work with them.” 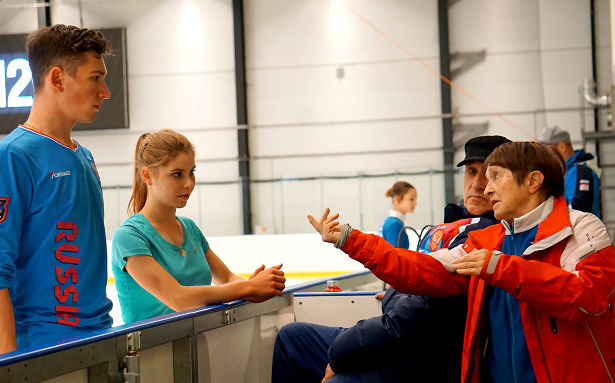 The skaters are enjoying working with Moskvina and feel that the coach knows and understands their deficiencies and mistakes and knows how to correct them. In fact, they have come to trust her fully in the short amount of time they’ve been together.

“She is really a huge professional in her job,” Galliamov pointed out. “We listen to her so that we can improve in everything.”

“Even if we had doubts at the beginning if something that she told us would work out, or we thought it didn’t suit us, we were convinced every time that after all, Tamara Nikolaevna (Moskvina) was right,” Mishina added.

The skaters feel that they have learned a lot in their new training group — not only in terms of discipline — but as individuals.

“From my side, I think I understood more of the work of the coach,” Mishina pointed out. “I have a deeper understanding. Before, we just did what the coaches told us. Now before we do something, Tamara Nikolaevna has us to think about it and to think about all possible options to do it better.”

The 2019 World Junior Champions were also attracted by the fact that the reigning European Champions Aleksandra Boikova and Dmitrii Kozlovskii are training with the same coaches. 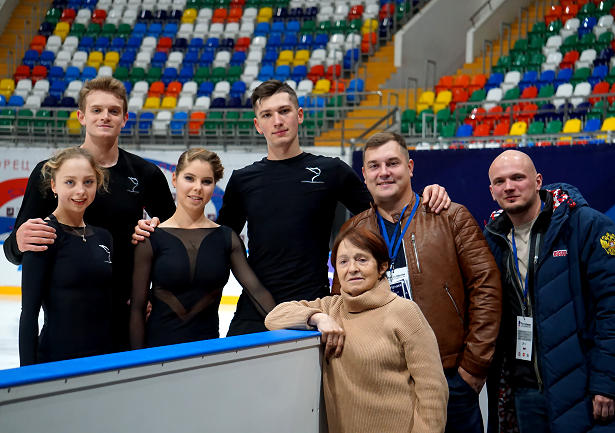 “Dima (Kozlovskii) and I have known each other for a long time, since we still skated singles,” said Galliamov. “In the dressing room our lockers were next to each other, so we were locker neighbors. We get along absolutely fine.”

“We skated in one group, under Elena Alexandrova Klimova, the mother of Fedor Klimov,” chimed in Mishina, who has known Boikova since childhood. “We have a good, friendly relationship. There is no rivalry, we don’t argue. On the ice we give way to each other.”

The two teams are now sharing the same ice at Moskvina’s club in St. Petersburg and describe it as “motivation” for them to train alongside a “high-level” pairs team.

“This just pushes us further to improve faster and learn something new,” said Galliamov.

Mishina lists more individuality, new and original lifts, steps and transitions as their improvements. In their new short program, the lift really stands out.“One person thought of the entry, while we worked out the middle part with an acrobat who suggested… I don’t even remember,” she said, laughing. “Tamara Nikolaevna took into account all the ideas. At first the lift was a bit different, but she then said this is the best option.”

The short program is set to variations on the ballet Esmeralda by Cesare Pugni in an arrangement by Alexander Goldstein. 1988 Olympic Ice Dance Champion Natalia Bestemianova choreographed the routine.

“I think it worked out nicely,” Galliamov noted. “We like to skate to this character. It’s a lot of fun. The music helps us to skate with emotions and courage. We’ve seen variations of the ballet and we understand the character and the emotions. We decided to do a remake to not go completely into that (classical) direction. After all, we are in the year 2020, and if we use classical music in a somewhat modern version, it is interesting.” 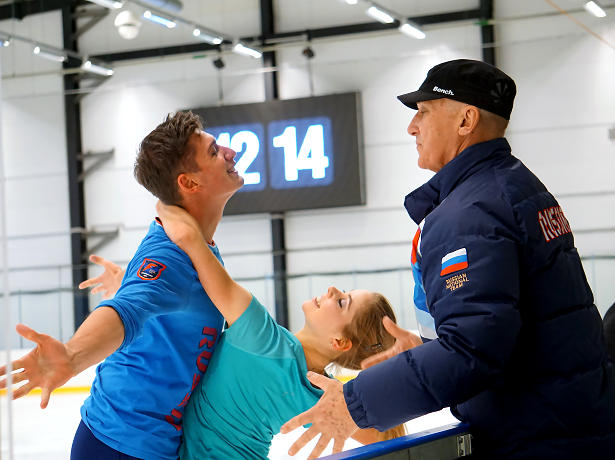 For the free skate, the team picked Queen’s “Bohemian Rhapsody” citing that the coaches felt it would be a good fit.

“I’ve listened to it before in my player and I really liked it,” said Galliamov. “We watched the movie Bohemian Rhapsody and we liked it and the program is a bit about the biography of Freddie Mercury. I am trying to bring across the role of Freddie. Obviously, we’re still working on the program. It is a new style for us.”

“Sasha is Freddie and I am his inspiration,” Mishina explained. “At the beginning of the program, I am going away from him, he is losing me, then we find each other and finally inspiration comes to him and he wrote a new song and is re-energized.”

During the lockdown last spring, the skaters used the time to focus on their studies at the Lesgaft University for Sports and Health. They were studying in the same class.

“The pandemic has stopped the training process, but we tried to catch up as fast as possible,” said Galliamov. “We had to improve and change everything and learn new elements in a rather short time.”

“The pandemic is a bit scary, for the family and friends,” Mishina noted. “It is a shame that the borders are closed and we cannot see our foreign friends.”

The skaters left a strong impression at the test skates in September and were scheduled to compete at the second Russian Cup series in Moscow in mid-October, but Galliamov tested positive on Covid-19 shortly before the event, forcing the team to withdraw.

“Everything is okay. I am now at home in self-quarantine,” Galliamov said. “Obviously, it is upsetting that we prepared for the competition and then this mess happened that I didn’t expect at all. I still don’t know how I caught it (the virus). I hope to return on to the ice soon so that we can make the fans happy with our performances.”

The team is currently slated to compete at the Grand Prix Rostelecom Cup later next month if all goes well. However, their goals are clear: “Our main goal is to get to the next level where we can compare to the best teams in the world. For example the Chinese. They are aiming at the highest results. The other pairs are lower. We would like to be compared to the very best teams,” said Mishina.